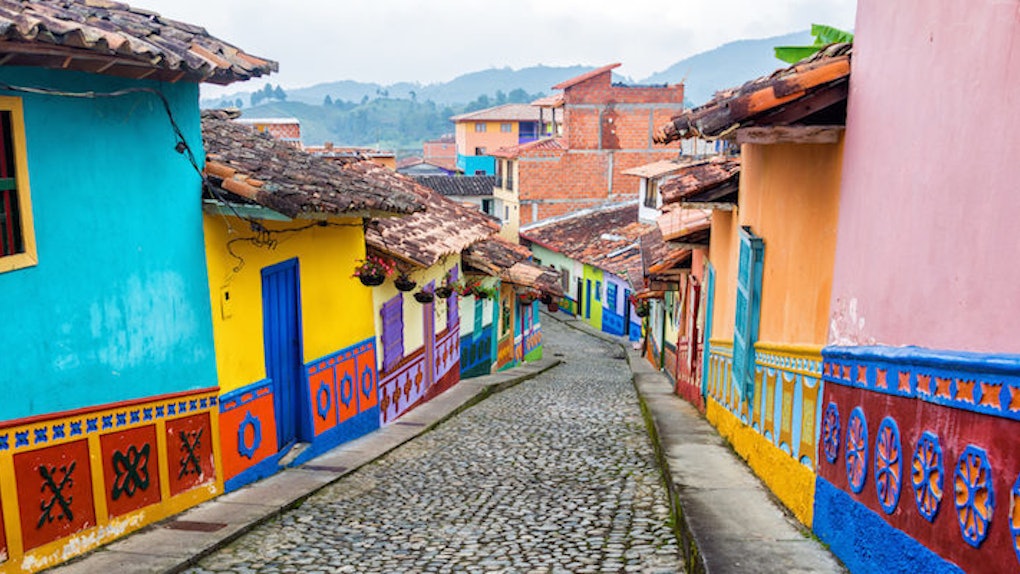 I'm a 25-year-old man who has been living in Medellín, Colombia for the past six months.

Yes, the same Medellín, Colombia that has been recently popularized by the hit Netflix series, "Narcos."

Even if you haven't watched the series yet, I'm sure you've heard about it from one of your friends or through some media outlet.

Almost 22 years after drug kingpin Pablo Escobar's death, his story is more popular than ever.

Despite the show's popularity, there has been quite a bit of pushback regarding the ethos of producing a show that depicts Colombia in such a negative light.

There are a number of articles circling the web protesting the show, mainly because the show plays up the negative stereotypes many people around the world already hold about Colombia.

I understand that perspective, but on the other hand, the show is telling a story that is set over 30 years ago, not in present-day Colombia.

But, I'm not here to debate with anyone about whether you should watch the show or not.

Instead, I would rather give you a first-hand look at what life is like in Medellín, Colombia and why you should visit:

If Colombia should be known for one thing, it should not be the cocaine.

It should be the gorgeous biodiversity of the country.

I've done a decent amount of hiking and exploring here, and I still feel I've barely tapped into the adventure opportunities.

Like I mentioned earlier, I live in Medellín, Colombia, and the 360-degree views here are like something out of a magazine.

2. This country is a backpacker's dream with nearly every terrain imaginable.

Even if you are a city person who doesn't like to explore, you'll change quickly when you're in a city that is so lush with nature that it sometimes feels like a jungle.

3. The women are drop-dead gorgeous.

It's no accident this past year's Miss Universe was from Colombia.

I remember moving here and telling my buddies there was no chance I was getting into a relationship. Six months later, here I am with a Colombian girlfriend.

In addition to their physical beauty, what makes the women here even more attractive is their swagger.

Colombian women have a confidence about them that is unmatched to any culture I've seen elsewhere.

An example of this confidence is when you walk down the street or you're in a bar and make eye contact with a women.

Here, if a woman is attracted to you, she will hold eye contact for as long as you're willing to (or until you just go up and say something).

In the US, it seems to be the opposite. Most women look away when eye contact is made as if the experience is just a little too intimate for them to handle.

4. The dating culture is backwards.

In my experience of dating women in the US and in the UK, women there are often unreceptive to dudes approaching them, and they don't usually give a guy their number unless they are sincerely interested.

But if you do happen to get their number, it usually means enough rapport has been built for the two of you to go on a date in the near future.

Here in Colombia, these interactions go much differently.

In my experience, as well as the experience of many of my friends, women here are extremely friendly and receptive to talking to you and giving you their number from the get-go.

But that by no means implies you will be hanging out in the future.

Once you get a number, there needs to be a ton of rapport built over an extended period of time via texting or talking on the phone before that first hangout sesh goes down.

Once a week, I go to the state university and take part in an acro-yoga class.

At the same university, you can find students slacklining, playing soccer, putting on cultural events, working out and other things you would see at a university in the US.

The only thing I've found to be a bit different is the police are usually not allowed on the schools' premises.

Also, somehow marijuana gets a free pass at the university, where students can be found anywhere casually smoking and hanging out with friends.

This is often a before the acro-yoga class activity.

6. Americans don't have the best reputation.

Most Americans are known for being interested in two things: having sex with "prepagos" (prostitutes) and doing cocaine.

This reputation is one all American dudes have to transcend when they first get down here, and for good reason.

A ton of dudes do come down here for those two things, and they give the rest of us a bad rap.

If you do come to visit, expect to have that stereotype pinned on you, but if you act like a decent human being, the locals will see you're “one of the good ones” pretty quickly.

7. It's incredibly affordable to live an upscale lifestyle.

At the time of writing this article, the USD is almost three times stronger than the COP (Colombian Peso).

That means life here is incredibly affordable, and you can essentially tripe your lifestyle from the US.

An example of this is going to a nice upscale restaurant ordering a pizza, bottle of wine and dessert for you and your date, and walking out of there spending less than $25.

Depending on where you live in the US, this can usually cost you closer to $70 to $100.

Want to grab a quick lunch? The menu of the day will run you around $3.

Want to hop in an Uber? An average 15-minute ride will cost you around $3.

You get the point.

8. Paisas (people from Medellín and the surrounding area) are super friendly.

The kindness and warmth of people here has been one of the best parts of living in this city.

My buddy and I run an online fitness company, and we spend a lot of time outside in parks shooting workout videos.

On multiple occasions, locals have come up to offer us free water, and they take a genuine interest in what we're doing.

Overall, there just seems to be a very warm culture here.

Whenever I go to my usual coffee shops, restaurants or gyms, I am always welcomed with a huge smile and a fist pump or hug from those who work there.

In addition to being friendly, people seem genuinely interested in giving back to their community.

I've volunteered with a couple organizations that are dedicated to both helping out the homeless and the youth living on the outskirts of the city.

I remember telling my aunt from NYC I was moving to Medellín, and I'm pretty sure she thought those were going to be the final words I ever spoke to her.

I will admit I have had my run-ins before.

After a few months of living here, a Colombian girl I was seeing and I were about to walk through a local park around 2:30 am.

She mentioned walking through the park this time a night probably wasn't the smartest idea.

With a few drinks under my belt, I told her to relax, and in the park we went.

Seconds later, we were held up at knife point by three dudes who stole my phone and her purse.

My story is not uncommon, but it's also never very surprising when you hear about an incident down here.

You have to use common sense, just like you would in any other big city.

There was a story that went global recently about a New Yorker who was shot and killed in a botched robbery, but you have to look at stories like that from a rational perspective.

This guy was being robbed by guys with guns, and he tried to physically resist the robbery.

No matter what city in the world you live in, that's not going to end well.

Many other stories down here make you roll your eyes as well.

There are some Facebook groups for foreigners here, and every time someone tells a story about being robbed it's like, "Yes, of course that happened."

Often, you hear from grimy 60-year-old men they were drugged and robbed by 19-year-old women they brought back to their places.

If you are that old, and you're bringing back a woman that young, what do you expect to happen?

10. There are a ridiculous amount of holidays.

There are 18 public holidays a year here.

This is the second most holidays in the world.

To give you some perspective, we have 10 a year in the US. This country knows how to have a good time.

11. They have quality health care for a fraction of the price.

Medellín is renowned for having eight of the top 42 hospitals in all of Latin America.

The doctors are highly qualified, and the cost of health examinations and procedures is a fraction of the price.

For example, I'm going to the dentist this week for a cleaning, X-rays, etc., and it's going to cost me about $30 USD.

12. The coffee cannot be beaten.

For less than $1, you can get the best Americano you've ever tasted in your life.

Colombian coffee lives up to the hype 100 percent.

Medellín is a dream destination for freelancers and entrepreneurs because of the plethora of cafés and coworking spaces.

As long as you're in the most developed areas of the city, most spots have Internet that rivals any connection you will find in the US.

14. The graffiti here is unreal.

There is awesome graffiti to check out around every corner, so I literally never run out of material to share.

Medellín is also home to the biggest piece of graffiti art in South America.

In closing, keep in mind this has been my experience, and I do live in one of the nicest neighborhoods in Medellín.

Colombia is still a developing country, but it's a far cry from what you might see on the media or on the show "Narcos."

I'm pretty sure my friends here are going to give me some flack for letting the cat out of the bag regarding what an incredible place this is, but I thought the rest of the world needed to know the truth.