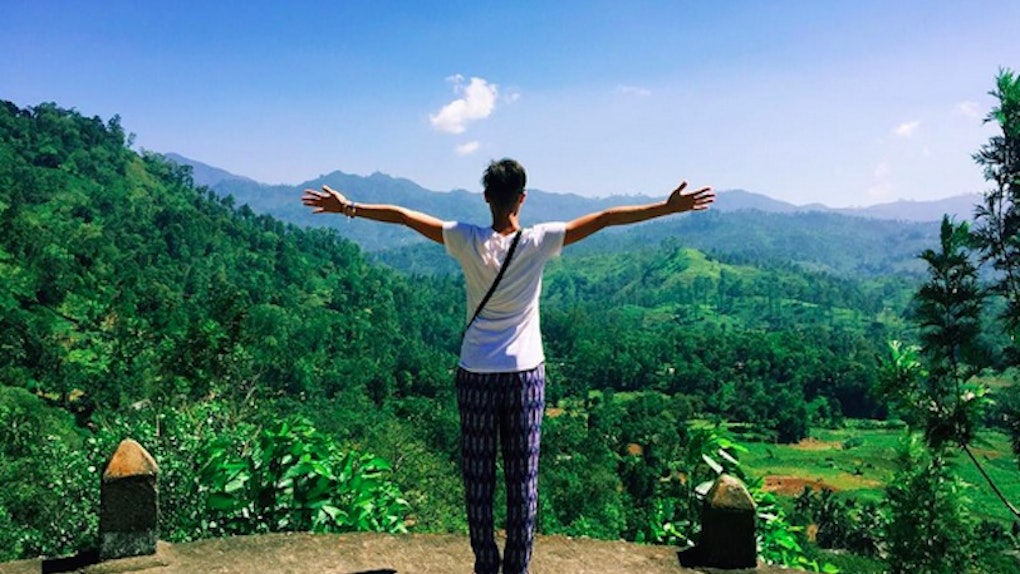 While planning a trip to India with two friends, a passing comment led to a spontaneous adventure through Sri Lanka. We spent two weeks hustling through the bottom half of the country, trying to see as much as possible and knowing it was inevitable we would return to explore the rest.

On one of our last days there, Condé Nast Traveler came out with its "16 Places To Go In 2016" list and Sri Lanka was number two. So, if you need further convincing, here are eight reasons to travel to Sri Lanka now.

There are few places in the world that feel untouched by tourism. Due to the 2004 tsunami and 30 years of civil war, which ended in 2009, Sri Lanka hasn't been a travel destination for long.

In our entire two weeks, my friends and I met three Americans: one our first night in a hostel by the airport and an older couple at the airport when we were leaving. It felt like, aside from the occasional touristy town inundated with French and Russian vacationers, we were the only Westerners there.

2. Sri Lankans are the nicest people ever.

Yes, the tuk tuk drivers and shop owners will still try to up-charge you, but on the whole, Sri Lankans are helpful and friendly.

We stayed with a family who practically adopted us in one of the more touristy towns, Mirissa. We were supposed to stay with them only one night, but after an epic dance party, we asked if we could have the room one more night. They were devastated to inform us the guesthouse was booked up, but the grandma's face lit up when she said, “You will stay in my bedroom.”

They weren't taking no for an answer, and so, we found ourselves moving into the grandma's bedroom the next day, after she fed us an epic breakfast. That night, the dance party was replaced by trying on saris and doing karaoke.

This same friendliness followed us through Sri Lanka, from Golden, the man in Galle who did everything in his power to help us find a guest house when his was full; to Santha in Kandy, who became our Sri Lankan dad, teaching us how to cook, taking us to his favorite spice shop and insisting we stay with him the next time we visit.

3. A different kind of curry is good curry.

Sri Lankans eat rice and curry. A lot. And unlike India, where rice and curry are dishes sold separately, Sri Lanka gives you both: white rice with at least a few curries served together.

There is tons of cinnamon, fresh coconut and coconut milk, turmeric and chili -- not to mention the ubiquitous curry leaf. The only downside of Sri Lankan food is there isn't a ton of variety from one dish to the next, aside from the ingredient being curried.

On the other hand, the fresh fruit is to die for, the fish is spectacular, and the crowning jewel of Sri Lankan breakfast is the hopper. A thin, coconut milk and rice flour crêpe with a soft poached egg in the middle, stuffed with freshly made pol sambol, a coconut chili salsa, is probably one of the greatest things that has ever entered my mouth.

4. Sri Lanka has a spectacular history.

It's true: Every place has its own cool history and culture. Some of Sri Lanka's history is an extension of India's story, but it has a distinctive flavor. Sri Lanka has had many names, including the British Ceylon and the Persian Serendib. In fact, "Serendib" is the origin of the word “serendipity,” and if that alone isn't enough to get you there, I don't know what is.

The country has been colonized by the Dutch, the Portuguese and the English, and each culture has left a mark. The fort city of Galle makes you feel like you're in a small European seaside town, and its 600-year-old ramparts protected the small city from the tsunami that destroyed the rest of the modern area.

The town of Nuwara Eliya is known as Little England and is dotted with Victorian architecture, as well as tea plantations as far as the eye can see. The ruins of Sigiriya, high on top of a huge rock, are Sri Lanka's answer to Machu Picchu.

In Kandy, the cultural and physical center of Sri Lanka, there is the Temple of the Tooth, which houses the Buddha's left canine tooth. Seriously.

5. It is surrounded by beautiful beaches.

Regardless of where you are on the coast of Sri Lanka, you're going to be on an amazing beach. In fact, Sri Lanka is a big surf destination, one that isn't overpopulated.

Staying in Midigama, in a hotel right on the beach, was one of our favorite experiences. The sand was a beautiful white gold, the Indian Ocean shades of sparkling turquoise, and the area is sparsely occupied by locals, surfers and stilt fishermen.

In Mirissa, you can find small, homey resorts on the beach, more surfing and locals and tourists mingling together.

The Udawalawe National Park in southeast Sri Lanka is famous for its wild elephants. You can also go to the more popular Yalla National Park to see leopards, but as in many developing countries, the practices of safari tours aren't very kind to the animals and take away from the enjoyment.

Udawalawe, on the other hand, is lesser known but has a reputation for being one of the best safaris outside of Africa. Going first thing in the morning gives you a safari experience almost completely void of other sightseers.

7. You'll take the most beautiful train ride in the world.

The train ride from Kandy to Ella, a town up in the hill country, is considered by many travelers to be the most beautiful in the world. It's a bit rickety, and from time to time, it slides back on the tracks a bit as it slowly winds its way through the mountains of tea plantations between the two towns.

The ride takes about four to five hours, and you will spend the entire time gaping out the window. This train trip is probably one of the most popular tourist activities in Sri Lanka, so either book your tickets way ahead of time, or do what we did and go backwards, from Ella to Kandy.

8. It costs practically nothing.

With many of the cheap backpacking destinations rising in price, Sri Lanka remains remarkably affordable. Of course, there are options for a high-end vacation to Sri Lanka, but you can also get by minimally.

While most of the accommodations are guest houses or hostels, you can also find great deals all over the country. Our hotel on the beach in Midigama was about $35 a night for three of us. If you're on a budget, Sri Lanka is the place to be.