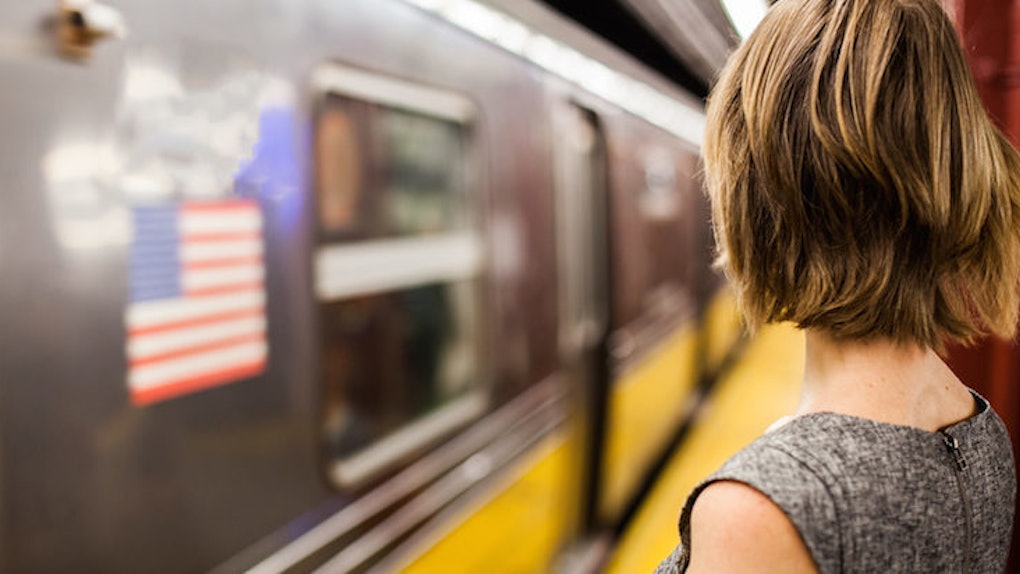 Any time we move cities (whether it’s the first time or the fifth time, whether we’re 17 or 25, whether we're going from city to suburbia or vice versa), it’s an adjustment. You’re going to go through a million little transformations while you're adapting to your new routine.

I’m no stranger to locational readjustment. I’m not into the naïve, kind of insulting, Millennial mindset that New York City is the be all, end all. I don't believe it’s so different and so unrivaled that handling it makes you superior.

But I will admit that NYC, like any city or new place to live, presents special challenges.

I take the train and bus every day now. It’s not all bad; I get more reading done than I ever did in suburbia, and the subway is a great place to sober up.

But it can be depressing.

It's probably because of the sheer number of people in a city like this one, but your chances of seeing things that shake your faith in humanity are a lot higher. It’s not a lot of new territory; it's just typical frustrations, magnified.

With that in mind, here are some lessons I’ve learned as a young woman in my first month of taking public transportation in the city:

I’ve always thought it’s more or less a requirement for basic friendliness, and good for balancing out my resting bitch face.

On the subway, though, I’m slowly being beaten into submission and forced to abandon human decency. Your smiles aren’t just smiles to creepy, gutsy men. If you have the gall to be kind or meet eyes, you risk facing come-ons and more aggressive leering.

Not only does it make me look touristy among more hardened New Yorkers, but (apparently) eye contact means, “Please feel free to stare unapologetically at me for the rest of the ride!”

Also, don't even get me started about smiles. A smile is an invitation to chat about sketchy euphemisms.

Now, I try to use discretion when dispensing smiles. I don’t want to stop altogether, that’d be tragic. But I still stumble into some landmines.

For those unfamiliar with the term, it describes the public transportation phenomenon of men sitting (sprawling) with their knees spread wider than pliéing ballerinas.

Perpetrators will spill over the very defined seat lines into the seats next to them, especially if those seats are occupied by women.

Despite the subway signs cautioning against this often gender-specific behavior, I’ve had to bask in many a thigh emanating warmth, while it lovingly presses me into a more compact shape. It even occurs when trains aren’t full.

I know I can’t empathize with having the extra hardware of the male anatomy, but that’s not the point. The subway seat size is not my fault and the subway is, unfortunately, not about accommodating physical comfort for anyone.

It’s less about comfort than it is about the disrespectful men feeling entitled to occupy space. Women are subconsciously taught from day one not to “take up space.” We’re taught not to be too fat, not to gesture too wildly and not to sit with our legs open.

After all that, I have to remind myself I’m entitled to all my allotted space. Now, I make myself into a bony-jointed mess of arms akimbo and my backpack sprawled out, to demonstrate I will be occupying my whole seat.

3. People will feel entitled to touch you.

I’m not talking about the times when the F train is packed at 6 in the evening, in the heart of Manhattan. Obviously, in moments like that, touching is inevitable.

Everyone is learning just how sweaty his or her neighbor’s arm skin is, and all people and genders are “guilty.” What I’m talking about is when someone, at 2 am, intrudes on your space and doesn’t get (what I thought were) normal, physical, human signals that you're uncomfortable.

People (read: men, almost always) on New York transportation are unfazed if you touch or nudge them out of your space. Why is it some guy’s arm comes to nestle into my side, even though there are plenty of empty seats? He doesn’t back off when I shift or shove uncomfortably.

The bold ones will rarely recoil at the scandal of touching a stranger, or out of respect for another human being’s uneasy squirming in their intruded space.

4. Having a “male chaperone” will help you, but that will lead to internal conflict.

The same rules we all know to apply to cat-calling will apply here. If you’re with your dad, boyfriend, male classmate, pizza boy or whatever, the creepy and invasively-inclined will see your male affiliation as the most effective deterrent, or reason to (pretend to) respect you.

I have mixed feelings about my boyfriend accompanying me on the subway.

Don’t get me wrong; it’s great because nowhere near as many men hassle or even look at me (and because, you know, I love him). One night, he fell asleep. But when one rider’s gaze was a little too bold, I just visibly squeezed my boyfriend’s shoulder and viola! The staring stopped.

However, after a moment of relief, I start to resent he was my only reason for feeling safe. I’ve found myself wishing I always have a boy with me when I’m traveling alone (and not for the fun reasons).

It’s hard feeling that dependent. I think I’m going to take up boxing.

Just today, a gust was making some serious threats to my sacred “womanly decency.” I looked quickly down to do some housekeeping, and when I looked up and scanned the four men around me, every single one was looking directly and hungrily at my crotch/ass region like drooling dogs.

You know if my skirt had blown up, it wouldn’t have been for your benefit, and I probably would have preferred you didn’t look.

Now, I’d love to live in a world where I could walk around with my skirt tucked up and my butt out all day, but it’s different when the choice of revelation is not my own.

Nobody better respond with the suggestion that women not wear skirts.

I care about fashion, and is that really the only way I can prevent people from visually consuming my bare ass? Have some respect for your own gender, guys!

6. Expect looks and comments that disgust you and make you feel uneasy.

My very first weekend in New York, I dressed up to go out and felt beautiful and confident. I had my pride crushed along with my comfort, when I caught a guy leaning forward in his seat toward me. Throughout the subway ride, he relentlessly returned to stare at me every time I caught his eye and scowled his gaze away.

They will, as another new New Yorker recounted to me last week, follow you when they see you eating a sandwich, while pleading to be that sandwich.

It’s not fair and it has to stop.

In the meantime, you have to learn how you’re going to deal with these moments. I like to speak up. But in a place where I'm alone and in potential danger, I’ve had to modify my means of response.

I’ll be frank: It’s disappointing to have to lower the bar and accept this climate as the norm because it’s not.

My biggest piece of advice is this: Don’t lose your faith in humanity. Don’t stop fighting for a day when this isn’t acceptable.

In the meantime, I’ll keep smiling (when I’m not scowling), and playing knee warfare with my sunglasses on.