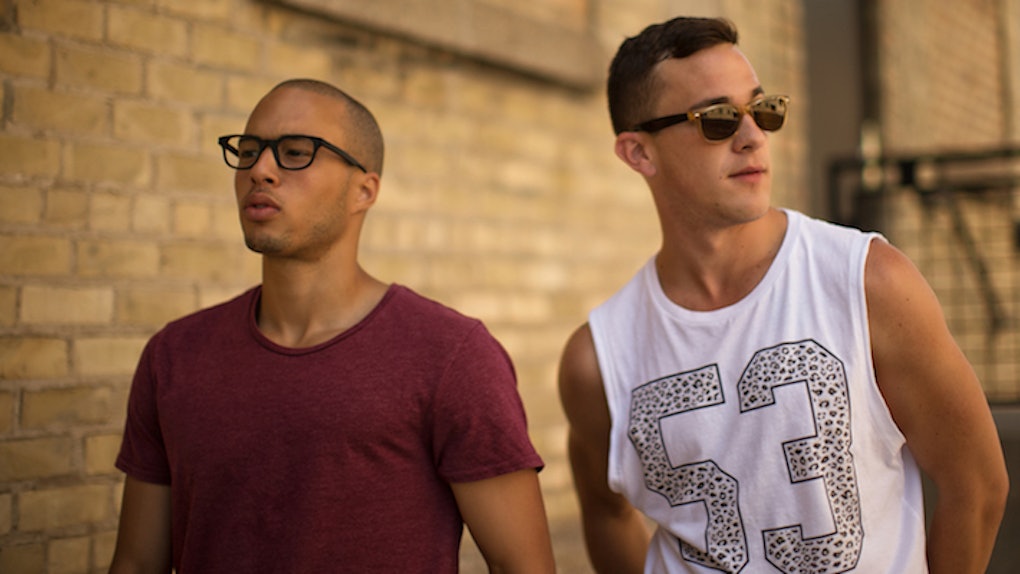 I'm feeling very at war with myself today.

The New York Times published an article called "The Rise of the 'Bromosexual' Friendship." The article suggests gay men and straight men, who have traditionally not been the chummiest of "pals" throughout American history (particularly in pop culture), are starting to bridge the gap and become insta "besties."

As examples of this trend, The New York Times cites Reza Farahan (a gay) and Mike Shouhed (a hetero) of "Shahs Of Sunset," as well as Bravo's Andy Cohen and sensitive frat boy musician, John Mayer.

When I first heard the term "bromosexual" a few months back, I thought they just meant gay guys who bro out, like gay guys who go to CrossFit religiously and wear muscle tanks (which essentially is every gay man in West Hollywood or Chelsea).

But I guess I was sorely mistaken. And I have to say, as I went on to read about the "bromosexual" friendship becoming increasingly popular, I started to feel really fucking territorial.

"Gay boys are MY territory," My nasty inner voice screamed. "I understand you're just finding out what loyal, amazing, funny friends gay men can be, but bitch, please! I've been rubbing elbows with gay boys since the first grade."

In fact, my very first friendship of substance was with a 7-year-old gay boy who wore blue nail polish to school every day.

I had to go to great lengths to protect his ass from straight bros beating him up, teasing him and making his life a living hell, just because he didn't fit into their idea of what a "man" is supposed to be like.

"So just because gay men are cool and trendy now these same dudes suddenly want to hop on the gay bus? When only a decade ago you were cracking "innocent" homophobic jokes that led a gay boy to a lifetime of self-esteem issues?"

I'm aware this is a sweeping, terrible generalization of straight frat guys — some of whom are lovely boy creatures, I'm sure — but this was just my gut response. And one cannot control their gut response!

But then, the sensible part of me stood tall on her soapbox and said, "ZARA, calm down, you angry lesbian. THIS IS GOOD!"

"Gay boys and straight frat guys should be friends. Wipe off the window dressing and toss aside the labels, and we're all JUST HUMAN BEINGS, right? Why are you being such a hypocritical, glib sourpuss?"

And then, as I thought about it some more, I began to wonder: Is my panic even warranted?

Aside from my straight cousin Danny who has been living in the West Village for so long he has no choice but to be in a plethora of "bromosexual" relationships, how many times have I ever even witnessed these friendships IRL?

Like, is the rise of the "bromosexual" even a real trend? Or, does is just exist on TV and in Hollywood, where gays and heteros are forced to coexist for the sake of ratings and networking?

To find out, I took to the city streets, where we grimy gays are just living our unglamorous lives.

First, I asked my friend Luke* if he was teased by straight frat boys in high school.

He swiftly responded with,"Oh, absolutely. They were the only ones who called me a faggot."

While Luke said he does have straight frat guy friends now, he doesn't think it's common for gay men to be friends with straight men, and he still feels on edge with them sometimes.

Honestly, I don't feel 100 percent comfortable in a straight frat bar cause the guys will say little things that are offensive when they get drunk. Especially if their girlfriends want to talk to us and befriend us. Also, on the flip side, I usually always get hit on or some sexual touching by a "straight" frat friend when they're drunk.

He also noted that he's still cautious "when a group of 'frat' looking guys are in a bar" or even when he's walking down the streets.

After that, I asked another dear friend Tyler* if he think that "The Rise of the 'Bromosexual' Friendship," is real. He said,

"No way. [That's] so uncommon, but [it could] be more common if gays would stop separating themselves."

Tyler doesn't have straight fratty friends. Although, he does think gay men and straight men might actually be really compatible.

"Straight frat guys actually have a lot in common with gay guys in that their prime objective is casual sex."

I guess I didn't need to panic, because real life boys are telling me they aren't seeing the "bromosexual" skyrocket.

But why was I so triggered? I had to self-examine.

I realized I've never felt comfortable around the stereotypical, straight frat guy. This dates back to middle school, the one and only time I dated a football player who later destroyed my adolescence by calling me a slut every single time I walked the school hallways.

This goes back to being called "weird" by straight bro-ish guys because I took a style risk and wore high fashion snakeskin pants to school in the 10th grade.

This circles back to frat guys saying things like, "You just haven't had the right dick yet" when I told them I was a lesbian.

This wasn't all boys, but there is a specific boy trope, the frat bro boy trope that sends me spiraling down a dark rabbit hole. It's not rational. It's not sane. It's just my experience.

Meanwhile, the gay boys have always protected me from the mean, straight frat guys that teased me when I was a kid.

They made me feel fabulous for being called a slut and told me it was a glamorous reputation to have, which was the only thing that healed and empowered when I was 12.

The gay boys also loved, loved, loved my snakeskin pants. My best friend Eduardo even wore them behind closed doors.

And if I ever told a gay boy I'm a lesbian, sometimes they'd wittily respond with, "Ooh, but don't you miss dick?" But it's not objectifying.

Gay boys are my safe place. We grew up protecting each other as people who were different and uncelebrated in the American public high school of the early 2000s. We saw each other.

Look, kittens, I'm a firm believer in the Andy Warhol mantra, "I think everybody should like everybody." If the "bromosexual" does indeed become a trendy dynamic, that's brilliant. I mean it.

As long as you don't forget your roots, boys.

After all, women have been there for the gay boys since the beginning of time.

So, with that in mind, I asked (on behalf of myself and women everywhere) both of my gays who they would rather be stranded on a desert island with: me or a straight dude.

"Well, obviously you cause we have more in common," Luke sweetly said, putting my troubled mind to ease.

Then I asked Tyler.

"Let's see. My first reaction would be to say you. No brainer." Music to my ears.

But just when I thought I was safe, he ended with,

But [for] functionally and [after thinking] more about it, I might say the frat guy. Because he could help me build things. Simply because he's a guy, he could kill animals for survival and eventually get lonely enough for some sexual activity.

Oh honey! If you think a woman (in particular a lesbian like myself) can't build things or kill animals for survival, you're sorely mistaken.

But hey, as long as your gut reaction is us ladies, we'll take it. Right, girls?