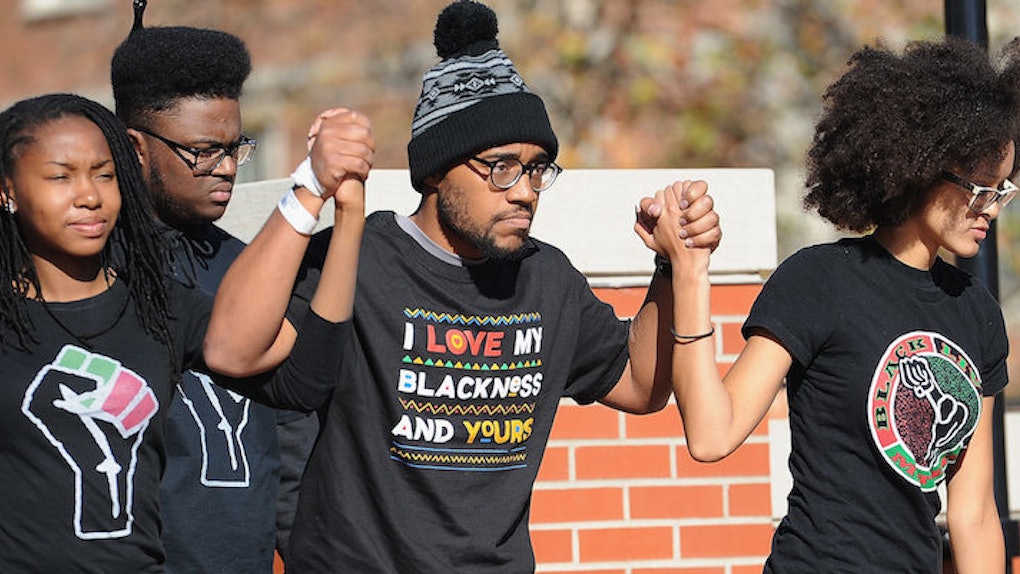 Why Ignoring Incidents Of Racism Will Only Silence Black Voices

On Tuesday night at around 8 pm, I got a call from my best friend about a threat being made to students on the University of Missouri campus, via the popular anonymous social media app, Yik Yak.

For the next four hours, we watched our Twitter timelines as the events unfolded at my alma mater.

This was a place I had just called home a few months ago. But it was also an institution where I had experienced more racism than anywhere else in my life.

It’s so easy for those not affected by the threats on Tuesday night (or even the killing of black citizens by police officers) to say racism doesn’t exist.

What these people fail to realize is their privilege allows them to feel that way.

White privilege is, in short, an advantage or immunity afforded to white people over what is generally experienced by non-white people governed by the same political, economic or social conditions.

It’s white privilege that allows you to walk around campus and not fear for your safety.

In my four years at Mizzou, I have been called the N-word every semester. I've been told to go back where I came from.

In one embarrassing moment, I've even been stopped at the university bookstore and had my bag completely dumped out because a cashier swore she saw me take something.

I hadn’t taken anything.

These acts are more than just coincidences.

They are more than just a few bad apples at our university.

They are examples of a deeper problem, not only at Mizzou, but all across this country.

Racism is so deeply ingrained in our history that white students on the Mizzou campus today don’t even recognize it.

The very campus they walk on was more than likely built on the backs of blacks in 1839, before slavery was abolished.

Missouri was one of the last states to abolish slavery.

Our rivalry with the University of Kansas actually stems from the Missouri Compromise and the Kansas-Nebraska Act, where Kansas was declared a free state and Missouri was declared a slave state.

Tuesday night, as I scrolled through Twitter and Yik Yak, I saw so many of my white peers and alumni claim getting called a racial slur was no big deal.

They said former UM System President Tim Wolfe's lack of reaction to racist incidents on campus was not enough reason for him to lose his job.

But they just don’t get it.

What Concerned Student 1950 is fighting for is bigger than one man’s removal from office.

It’s bigger than the football team boycotting practice and a game that could have cost Mizzou $1 million.

It’s even bigger than Hunter Park, who is the student believed to have posted the threats to Yik Yak on Tuesday night.

Systemic racism is the issue here.

It is why Mizzou put out a tweet, saying there was no real threat to campus, even though hundreds of students had seen and heard threats on campus in the time it took the university to craft the misinformed tweet.

It’s why it took hours for the police to release Park’s name out of fear for his life, as if black lives aren't under attack every day on campus.

It’s why the University of Missouri can get away with having only 3 percent of its faculty be black, when the black student population is more than double that.

Systemic racism isn’t understood by the majority because it doesn’t affect them.

Unless a person of color decides to give information about the systemic racism he or she has experienced, it doesn’t exist to people in positions of privilege.

These white students would rather focus on everything wrong with the protests that have happened on campus during the last 18 months than admit their beloved university has a problem.

It does, as do many universities across the country.

They must be heard.

Tuesday night was not the first time threats have been made to the Black Culture Center on campus or to black people on campus.

Administrators need to listen to students, create action plans for situations like these and stop brushing them off as isolated incidents.

Dylan Roof and other white supremacists have shown us what happens when people ignore online threats.

My fear is if white students, administrators and faculty don’t listen now, they'll regret it one day.