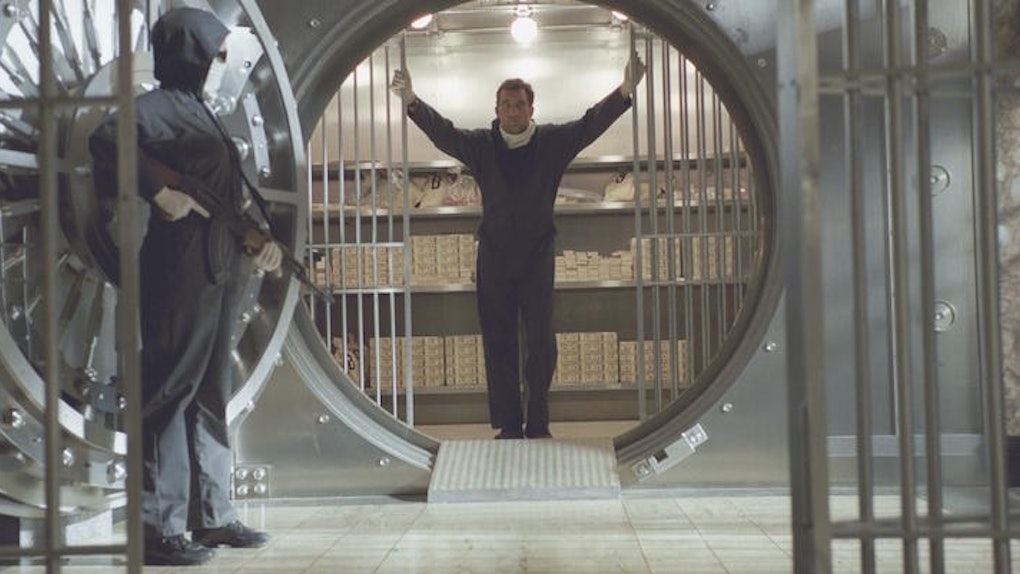 When I was 14, my mom sent me away to Virginia to live with my dad, who I hardly knew at the time. He often got himself into trouble with his brother (my uncle) and my older cousin.

One day my dad, uncle and cousin took me for a drive. My cousin told me he was going to buy an engagement ring for his wife, and in order for him to get a discount, I had to pretend to be his daughter. So, I did.

My dad and uncle waited in the car as my cousin and I entered the jewelry store.

My cousin had apparently been to this place multiple times because the owner greeted him and seemed to be expecting him. He introduced me as his daughter, and asked the owner to see the ring that he'd been looking at.

When the owner brought it over, my cousin told me to try it on, because he needed to make sure it would fit his "wife" (my fake mom) So, I did. Then my cousin said "Okay, it fits! I'll be back next week to buy it!" and returned the ring to the owner.

When we walked out of the jewelry store, my dad pulled around to the front so fast that the car made a loud, screeching noise.

The doors flew open, like something out of an action movie. My cousin rushed me into the car and we sped off. My uncle ripped up the business card the owner had given him, into pieces and let it fly out of the window.

I didn't yet understand what was going on. That was, until I saw my cousin pull out the diamond ring I tried on and started kissing it and laughing hysterically, like a crazed lunatic. It was a ring worth over $10,000.

You see, my cousin is a professional jeweler. I learned later that he made an exact replica of the ring he wanted to steal and cut a cubic zircona in the same shape as the diamond. He switched them at the store while I was trying it on. I didn't even notice, slick f*cker.

When I realized what I just took part in, I looked at my dad with disappointment. I could tell he was embarrassed. My cousin told me I was "part of the club now," to which I answered, "I don't want to be part of your club."

My mom bought me my ticket back home shortly after.

My cousin and uncle ended up doing major time a few years later, though my dad got lucky.

Although there could be extremely bad consequences, sometimes even the scariest, riskiest experiences in life can teach you something.

Here's what I learned:

You do what you're good at.

When you're a criminal, you've basically managed to master a skill that will get you in a hell of a lot of trouble.

My dad lived most of his life in the streets where he developed these crime skills. I can't necessarily blame him for doing the only thing he was good at.

It was the only thing that made him feel accomplished and thrilled.

By no means do I support his past actions. All I'm saying is, had he been fortunate enough to be raised in a less crime-ridden city and gotten an education, I imagine that he could've put his go-getter mentality and strategizing skills to good use.

I didn't want to learn it, nor was I seeking to, but observing how my cousin built a relationship with the jeweler taught me how easily people could be fooled by one's seemingly harmless protrayal.

My cousin did the risky thing by visiting the jeweler multiple times, but he knew the psychological effect it would have on the jeweler.

He knew the jeweler wouldn't think twice about having an imitation ring in his collection.

That day I learned you can't trust everyone.

You get a taste of the other side.

This experience really showed me how completely opposite my lifestyle back home was to the one I lived with my dad that summer.

I was exposed to precisely what my mom was trying to protect me from for my entire life.

My standards were tested, as I was faced with the choice to accept the choices my dad was making or challenge them.

I challenged them, and my dad learned I was pretty intelligent for a 14-year-old.

I learned to appreciate my mom's protectiveness over me, as even family can put you in the most vulnerable situations.

You learn the act of forgiveness.

I was mad at my dad for using me, but I forgave him. We all make mistakes — especially in desperate times — and I know we have all been desperate at one point in our lives.

Everyone deserves a second chance.

As weird as it may sound, because I was present for this event in my dad's life, we actually grew closer.

We both knew it was wrong, but we both trusted that the other would keep quiet about it. (Until now, that is.)

Besides, I considered him the "least bad" because he was "only the driver." I'm being biased here, but I don't care.

You discover the good in everything.

For the record, my dad's a changed man. He just hibernates in his studio, watching Discovery Channel and eating TV dinners now; he's harmless.

Looking back now, the story is kind of funny and the crime was… sort of genius.

(Don't you dare tell me I'm a bad person for thinking that.)

Although I was completely oblivious to what was going on, I still have that devious satisfactory feeling of having done something I didn't get caught for.

Besides, the facial expressions and reactions I get when telling this story are absolutely hysterical.