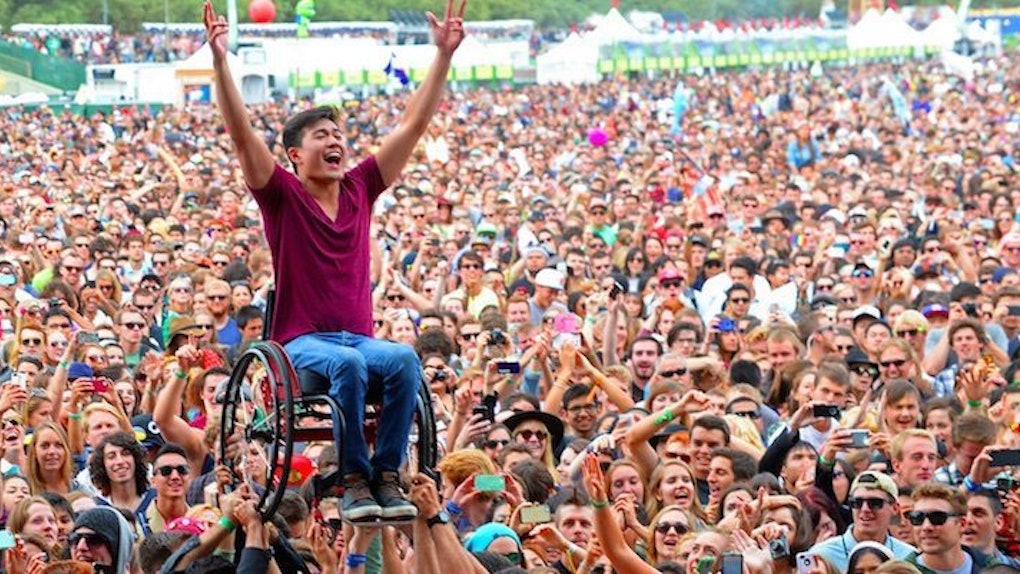 Why Gen-Y Should Practice Active Kindness, Not Just On Social Media

While sitting on the subway the other night, I found myself carefully watching the interactions around me.

A few seats away, I noticed an older woman shake her head and cast begrudging looks toward a couple who's baby was, temporarily, crying out as they entered the subway car.

The parents quickly quieted their child and moved over to sit next to the woman who had been disturbed by their child's noise.

The woman, clearly disgruntled, huffed and shifted away from the smiling couple, only to glare straight ahead, never making eye contact with the passengers beside her.

As I watched the woman's cold body language and facial expressions, in comparison to the seemingly pleasant couple beside her and their admittedly adorable child, I found myself wondering:

Is her reaction due to the fact that the child made a bit of noise? Is the woman just having a bad day? Or is it because the couple consists of two women, instead of a man and a woman?

Or, perhaps, is it because the family is of color? Was there possibly an unjustified prejudice at work here?

It may seem like a very insignificant interaction and, perhaps, it is. I don't think the couple even took notice of the woman's perceivable recoil to their presence.

But, it is interactions like these that I witness far too often living in a big city.

It's a city full of people who are all very different from one another, whether it be in regard to race, sexual orientation, pay-grade, beliefs, culture, appearance or behavior. We have it all.

Yet, as I walk down the streets and go about my daily life, I constantly notice how cold and standoffish many of the interactions taking place around me are.

There are thousands of lives unfolding on the same streets, but there is little kindness shown to ever bring them together.

I find this to be both a surprise and a disappointment. Since when did basic kindness or a simple smile from a stranger become rarer than the disapproving or distant latter?

I take notice of angry glances and words, ignorant impatience and perceivable judgment more often than I witness friendly glances or someone even holding the door open for someone else.

Of course, this is not the rule, there are plenty of exceptions, but I am referring to the grander scale.

I have, personally, always been someone who craved open connection with the people around me. I make eye contact with everyone, I smile freely and I will have a conversation with anyone who wishes to have one. This is simply how I've always been.

But when I first moved to the city, I was told that I had to stop doing those things. I was told to stop making eye contact with everyone I passed and appearing to be "so open" or "so approachable."

Why? Because, according to common sense and cultural standards, this makes me a target. This makes me weak or vulnerable to all the "crazy" in the city.

While I can understand the need to be careful with certain interactions, I refuse to close myself off to the people going about their lives around me.

I refuse to assume the worst of the people of the city I live in and wish to, instead, embrace them as often as I can.

That's not to say I am some model citizen of kindness and light; I have plenty of moments in which I catch myself casting judgement or a frown too, and there are moments I can be closed off.

But I do try my best to remain aware of these moments and ultimately, in control of them to remain the person I am proud to be. I am to be someone who is both open and kind to those around me.

Because how can I claim to be a supporter of social issues that I wish for acceptance, equality and fairness if I am not at least trying to practice something as simple as genuine kindness and courtesy?

Of course, as of late, there has been a lot of discussion surrounding issues of prejudice and equality, especially in regard to female rights, LGBTQ rights and the hope that our world is becoming more sympathetic.

Caitlyn Jenner has seemingly opened the floodgates to the discussion surrounding the often neglected transgender community.

While I think it is fantastic to see articles on such topics bombarding my newsfeeds and occupying the media spotlight, I don't think it means anything if it isn't put into practice. And we all know, things are often easier said than done.

And while I don't usually speak on this particular topic, in fear of not articulating my opinion in a satisfying manner, I will contest that any issue of rights, fairness and equality in regard to LGBTQ, feminism, race or otherwise comes down to the wish for equality for everyone.

It comes down to basic kindness and understanding.

You don't even have to take a strong stance on the issue, understand the depths of the debate or agree with every point or argument in order to exercise the desire to be kind. More importantly, the ability to be kind without prejudice.

If you ask me, kindness does not make you weak, and it is not something to be mocked or belittled. It makes you strong, it makes you capable and it makes you worthwhile. Kindness is entirely freeing.

Kind, genuine people are forces to be reckoned with because they open themselves up to everyone, to every interaction and connection. They do not fear it; kind people are inherently brave.

When we are discussing these sensitive issues of equality, I think we often focus too much on our personal stances or orientations.

We focus on the things that set us apart or divide us and forget that something as simple as a passing smile, kind remark or gesture can help — at the very least — begin to bridge the gap where equality is lacking.

Of course, prejudice and predisposed judgment will always exist and it will never be an entirely simple concept to dismantle.

But I think we complicate the process of love and acceptance by thinking we have to understand and accept every detail.

For some of us, we can, but some of us may not be able to.

What should matter is the belief that everyone, despite any perceivable differences, should be entitled to his or her own happiness.

Equality and love, if you ask me, shouldn't be about the details. They should be about simple kindness and courtesy in practice, every day.

Because sharing an article or claiming support doesn't mean anything if you can't be decent and compassionate to the people around you on a daily basis.

Equality, love and acceptance are about being open, even to the things you may not understand.

It's about thinking outside of yourself, opening your eyes and being aware of the world around you.

It's about opening the door for a stranger or offering him or her a quick smile or being pleasant on the subway, regardless of race, orientation, beliefs or any other differences that may exist between you.

It's simple, effortless acts like these that we should be able to wrap our heads around and implement into our daily lives. It is these things that make us better people.

If you ask me, the reminder of little, everyday kindness is the first step toward a better, more accepting world.