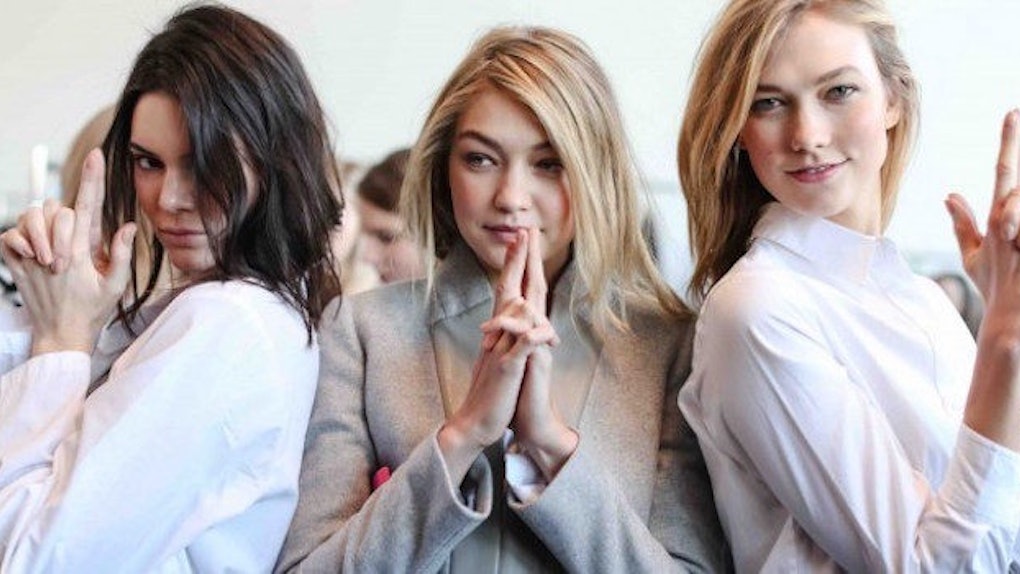 The Celeb Posse You'd Be In, According To Your High School Clique

What's the next best thing to being a celebrity? Duh, hanging out with one.

We're not only privy to our fav celebs' daily updates, but we also know what their friends are up to.

It's easy to be envious of their everyday lives like Troian Bellisario's aerial class and Kylie Jenner's brunch; it's clear celebs do everything in style.

It seems like every A-lister has a posse these days. And, with the help of social media, we know exactly who is in which circle, and what each crowd is like. Celeb cliques really aren't all that different from our former high school cliques.

So, here's a quick and easy way to figure out which celeb inner circle you'd be a part of.

Just take a quick stroll down memory lane and think back to your teenage years -- or, at least, the good parts.

If you were a jock or cheerleader...

You'd get along pretty well with Beyoncé and Nicki because you understand good things come to those who hustle, and also that girls run the world.

In high school, you spent hours in practice, pushing yourself to the limit and then pushing harder the following day. You worked for all of your accomplishments, and subsequently, you were the star of the team.

You weren't competing only with your female peers, but also with guys.

Queen B and Nicki Minaj epitomize the idea of alpha female. The hard work of these two singers is paying off; they are paving the way for more female hip-hop artists to make a statement, bringing voices of feminism to the genre.

Together, you'd all continue to motivate each other to strive for more success.

If you were a party girl...

Your days in high school were spent hitting the books by day, and the dance floor by night. You knew just how much sleep you needed to get in order to function, and you maximized the amount of fun in your time awake.

Shay's Instagram pics often show her spending hours on set and then tearing up the town with costar and IRL bestie Ashley Benson.

According to her Snapchat, #ButtahBenzo's festivities often end with late-night pizza, a girl's true best friend.

With your unlimited energy and desire for a good time, you'd have no trouble fitting in with this dynamic duo.

If you were the prom queen...

Your kindness and ability to be well-liked by a lot of people would easily put you in Taylor Swift's social circle, which includes models Karlie Kloss and Gigi Hadid.

In high school, you were able to fit in with any clique, and some referred to you as a "social chameleon," much like "Shifty Swifty" herself.

T-Swift was recently spotted with Karlie and Gigi in London, and her Instagram page is filled with pics of her stylish posse ("red lip, classic" included).

But we know Taylor isn't all about her good looks; she's continued to impressed the media with the kindness she shows toward all of her fans, making herself the perfect modern-day prom queen.

Rihanna would appreciate your DGAF attitude, which is why you'd totally hang with this singer and her friends.

You don't like to do what's expected of you, and you're someone who likes to push boundaries.

In high school, you reviled authority and stood up for yourself when you felt someone wronged you.

It's easy to see why Rihanna is a fun person to hang out with: She is ballsy, outgoing and unabashed and open when it comes to "taboo" topics.

If you were a brainiac...

You wore your intelligence like a badge in high school; you were always proud of your AP classes and honor roll streak. You were probably on the debate team, or Model UN.

Your quick wit and thirst for knowledge would make Emma Watson want to be your BFF.

Watson, who has also been seen hanging out with Taylor Swift, recently made waves with her speech at the UN on the importance of feminism.

Additionally, Watson is a well-versed traveler, which would make her the perfect road-trip companion. You'd have a blast traveling with her, discussing politics and current events.

If you were president of your drama club...

Everything you do is dramatic, so it only fits that you'd be besties with Vanessa Hudgens, who just finished her stint as "Gigi" on Broadway.

Some of Hudgens' closest pals include Sarah Hyland of "Modern Family" and her "High School Musical" co-star, Ashley Tisdale.

You'd fit right into her clique with your dark eyeliner and appreciation for artistic culture. In high school, you were the lead in all of your school plays, and most of your stories begin with the words, "This one time, at rehearsal..."

If you're running in Vanessa's crew, you'll always be able to swap stories about your high school "showmances," or stage a "status quo" flashmob at the mall.