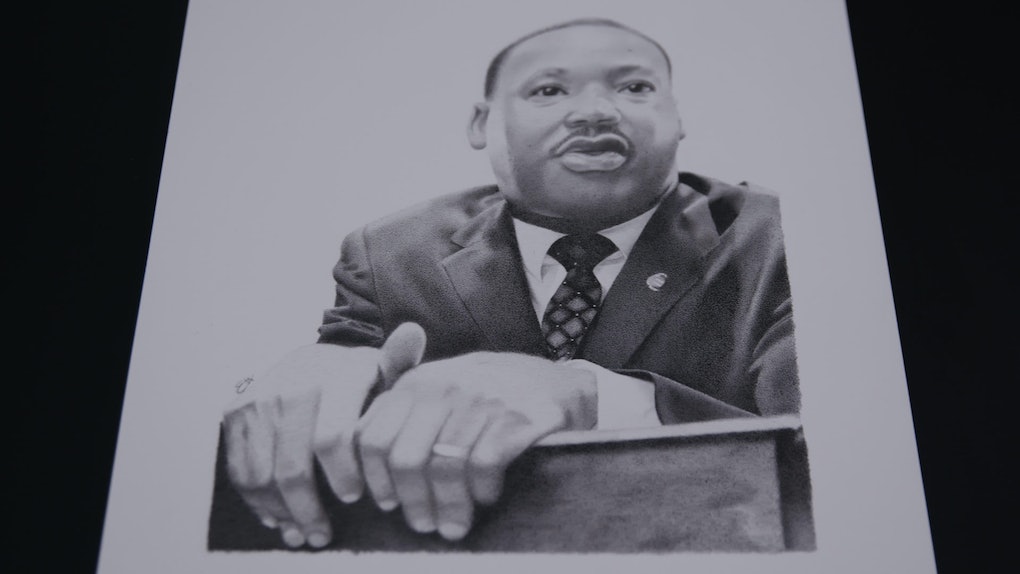 On MLK Day, we tend to look back at the work and teachings of Dr. Martin Luther King Jr. and see the big moments: the speeches, the rallies, the passing of landmark legislation.

We tend to gloss over the decades of work he and many others put in, the work that built the platform from which Dr. King was able to create so much necessary change.

This year, Erica Hummer, an artist from State College, Pennsylvania, honored that dedication by spending 65 hours crafting an image of Dr. King that's so accurate, it takes a couple of seconds to realize it's not a photograph.

Erica grew up in the home of the Penn State Nittany Lions. Surrounded by some of the country's best college football players, she saw firsthand how hard work and dedication could directly lead to peak performance.

Despite having no formal training in the arts, Erica enjoyed drawing so much she spent countless hours teaching herself new skills. When she discovered how much more detail she could achieve by drawing using only dots, she was hooked. She started to teach herself this precise art form, known as stippling.

She's always drawn parallels between sports, music and art. Only the best are recognized for what they do, and only those who fully dedicate themselves to being the best can rise to that level.

She's spent weeks and months on portraits of stars like Odell Beckham Jr., Wiz Khalifa and Alicia Keys. These icons are people who wear their dreams proudly and aren't afraid to chase after them.

Her portrait of Martin Luther King Jr. will be auctioned off next month, and the proceeds will be used both to help diverse law students attend law school through the ABA Legal Opportunity Scholarship Fund, and to support the NAACP Legal Defense Fund's continued efforts to advocate for civil rights and social justice.

This work will further Dr. King's legacy of giving a voice to the voiceless.