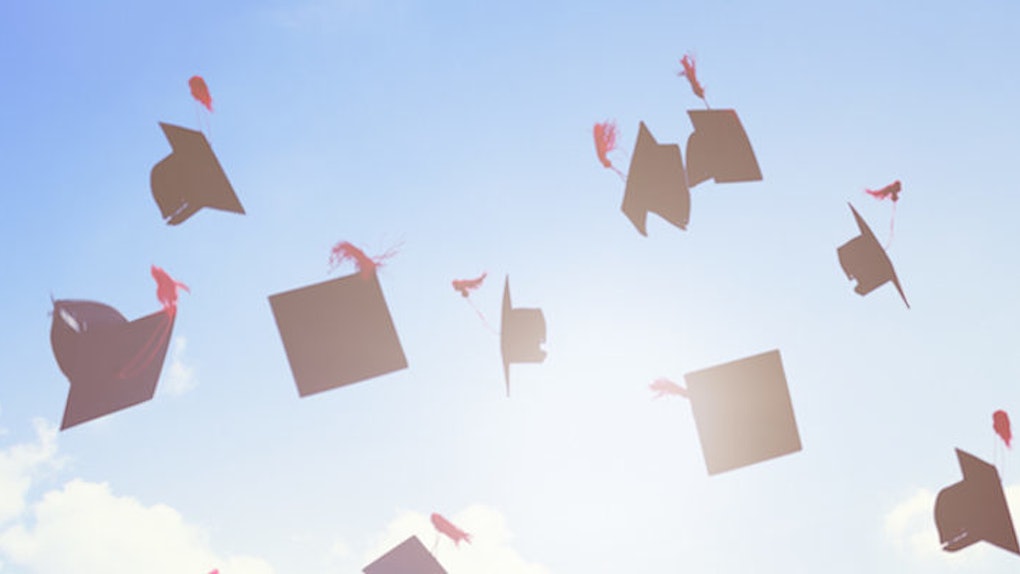 One Year After College Graduation, This Is What I've Learned

Almost exactly a year ago, I was handed a small piece of paper as my reward for four years of pulling all-nighters and crying out papers.

While actually receiving my diploma, I was focused on flipping my tassel the right way and navigating my first-ever conversation with the college president. ("Congratulations." "Thank you.")

But as I walked back to my seat to cheer on my friends for the rest of graduation, I distinctly remember thinking,

For the first time in my life, I have no idea where I'm going to be in a year.

Part of me was excited by that thought, but a larger part was scared sh*tless. Every year of my life since I was 5 years old had been defined by school. And now... it suddenly wasn't.

I had no job lined up. No apartment. No plan. The year ahead was a blank slate.

Today, I do have my own apartment — OK, with roommates, but it's still 700 miles away from my parents' house — and a job with a decent salary.

On paper that sounds like the ideal post-graduate success story, but I'm not here to lie to you. It's been a bumpy ride since graduation.

The fact is, once you graduate, your life will change, no matter what you do. Your routines will change, your relationships will change and, as a result, you as a person will probably change, too.

That's definitely not always a bad thing. For me, some of those changes have been really wonderful.

There's no one answer for how to get a job or be successful after you graduate. The most important part is learning how to adjust to the post-college life in a way that makes you happiest.

It's an ongoing process and, to be honest, it's one I'm still navigating. I've learned a lot in my first year out of school, and I'm sure I'll learn even more in my second.

1. The world no longer revolves around your opinions.

Of the many new people you will meet after you graduate, very few of them will care to hear your analysis of how "The Social Network" is the modern day "Citizen Kane."

Professors cared about your opinions so much they might have even resorted to begging to get you to share them. So it's a little jarring when you're suddenly in a world that isn't focused on your thoughts and ideas anymore.

This is a humbling lesson, but a good one. I am not trying to suggest you stop sharing your thoughts with the world — just be prepared to do a lot more listening and waiting than you did in college.

Also, people will care about your opinions a lot more if they think they can profit off them. That part will kind of suck.

2. Being healthy is a thing you actually have to do.

While I was a student, I gave very little thought to what kind of food I was putting in my body. At meal times, I usually just ate whatever the dining hall was serving.

The good thing about this method was that I got a decent variety of nutrients in every meal. The bad thing was that after I graduated, I had no idea how to buy food or cook for myself.

I quickly learned eating like sh*t isn't very fun because, unsurprisingly, it makes my body feel like sh*t. Before I graduated, I never understood the appeal of salad for a meal. Now, to my horror, I'm low-key one of those salad people who talks about arugula and goat cheese with way too much enthusiasm.

As for exercising -- well, that one's still in the works for me. But it's coming in Year Two. I can feel it.

3. Friendship requires a lot of effort.

One of the biggest things I took for granted in college was how incredibly easy it was to be friends with people. On any given weekend at college, there were probably at least three people who wanted me to go to their dance recital. There were always so many things going on, it was actually hard NOT to socialize.

After I graduated, this pretty much went away. Sure, there are still things going on, but they cost money, time and effort. And we're all broke because we're unemployed and paying off college loans, or we are employed but still broke and also tired all the time.

I've gotten pretty good at exerting this effort over the past year, and I've found my friendships all the more meaningful because of it.

4. Work "binges" are no longer possible.

I am very glad I will never have to suffer through another finals week again. The amount of work students do in that week is straight-up bananas. I honestly have no idea how I made it through eight of those weeks without quitting.

Actually, I do know: The thought of that sweet, sweet vacation sustained me. After you graduate, the grind becomes a little different. Life and work are no longer defined by end points. It all stretches, seemingly infinitely, in front of you.

This fundamentally shifted my work ethic. I really can't pull terrible, breakdown-laden all-nighters because I don't get two weeks of recovery time anymore.

After graduation, work ethic becomes a game of moderation, which is probably a lot healthier. Unless you're going to grad school. In which case, good luck.

5. People will get married and you will need to be cool about it.

Sorry. You just will.

So, congratulations, new graduates! Assuming your lives will go exactly the same way as mine, you guys are all ready for your first year of post-grad life now.

JK, JK. Obviously this is all very subjective. Hopefully you found some of it helpful anyway.