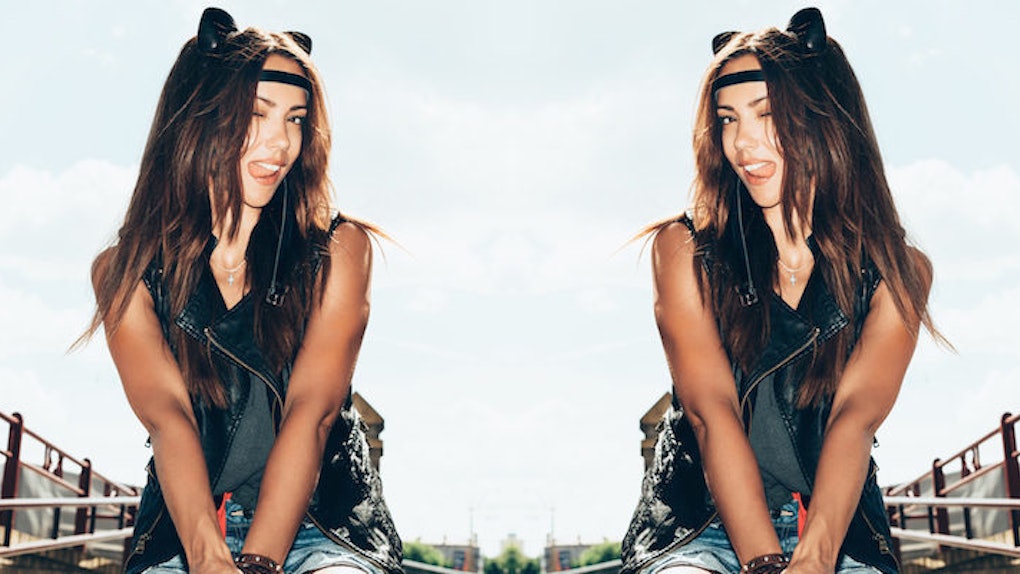 Beauty Is Boring: Why Being Pretty Is Irrelevant Without A Personality

As a teenager, I had two very different close friends, Jade* and Miranda*. Jade and Miranda were opposites in both looks and personality, and they never uttered a word to one another unless they were with me.

Miranda had a husky voice and a fierce personal style of vintage dresses and arms smattered in tattoos. She was also one of the most hilarious entities to ever grace the planet, with her badass, twisted sense of humor and ammo of opinions or innovative ideas or quirky jokes.

Her personality attained the ability to light up a dark room. She was the kind of epic girl-creature you just want around you all of the time.

Then, there was Jade. Jade was the kind of beautiful that left the entire contents of a bar teeming in universal awe. She had clear eyes, glowing skin and that coveted, impossible-to-define hair color, that sweet spot that resides somewhere between blonde and brunette. It was shiny and hung down past her waist, only highlighting her gorgeously curvy physique.

In the beginning of eleventh grade, all the boy creatures in my world wanted nothing more than to date beautiful Jade. Jade brought out the primal instincts in the boys. They became reminiscent of apes, acting like gorillas on skateboards when in her presence.

She made my witty guy friends fumble for words and pound their chests, transparently competing for her affections.

The boys, at first, paid very little attention to Miranda (not that she cared). They were so mesmerized by Jade's epic beauty that they didn't pick up on Miranda's hilarious commentary and fierce fashion choices.

Though Jade got a ton of attention, she was extremely quiet. I figured she was just acutely shy and attempted to break through her shy shell. The more I pressed her, the more I feared how little was lurking beneath the surface.

Every girl in the teenage stratosphere wanted to date John, with his sparkling, bright white teeth and almond eyes.

"Zara" he whispered, with a fierce intensity. He touched my arm. I could feel the jealous glances from the thirsty teen girls penetrating the depths of my soul. This gave me great pleasure.

"You've got to hook me up with Miranda."

"Oh, Jade isn't really interested in dating anyone, I don't think," I answered, mishearing him. It had become my default response when any dude asked me for girl advice.

"I'm not interested in Jade. I said Miranda, you idiot."

Miranda? Now this was wildly unexpected. John, the most popular guy in school, the guy that every girl drooled over, the only guy whose inherent gorgeousness was equal to Jade, didn't want Jade. He wanted Miranda.

Miranda was beautiful, don't get me wrong, but she wasn't the kind of beautiful high school boys usually appreciated. She was what I like to call a "complex" beauty. She was loaded with personality, intricate thoughts and multifaceted opinions. She had meaningful tattoos and hated pop music. She wasn't exactly Ms. Teen USA.

"I've never met anyone like her. I've got it bad," John confessed, looking more vulnerable than I've ever seen him in the entire course of our 10-year friendship. He was like a puppy begging for a treat, staring at me with massive, pleading eyeballs. I imagined him with perked furry ears.

It wasn't long before John and Miranda started dating.

John was completely obsessed with Miranda. Miranda enjoyed John, but she wasn't the kind of girl to go crazy over a boy. She had her own sh*t going on. She was in a band and busy planning her move to LA post graduation. She had a sea of close friends.

One day, I was drinking with John at a high school house party. Miranda wasn't there because her band was playing a 21-plus gig in the city, and John was super bummed out and missing her.

"So, why Miranda?" I asked, in a moment of drunken honesty. "Why not JADE? Everyone expects you to be with JADE," I pondered aloud, shouting the JADE for dramatic effect. "JADE is so pretty."

"Pretty is irrelevant without personality," John replied, with the wisdom of an old man. He soulfully gazed into his Pabst Blue Ribbon and puffed on a perfectly rolled joint.

Pretty is irrelevant without personality. John's words haunted my heart for the rest of the night, bleeding into the following hungover morning and the rest of my life.

Being pretty doesn’t say anything about who you are.

John was right. It hit me like a ton of scalding hot bricks to the skin. What the f*ck is pretty, anyway? You haven't accomplished anything by being born pretty and winning the genetic goddamn lottery.

Pretty says absolutely nothing about your character, intelligence or who you are as a person.

As I got older, John's words stuck with me like a bad habit you can't shake. I started to realize that "pretty" might get you in the door, but it's not going to get you the job. And if it does get you the gig, you need the brains to handle it, or you will get fired.

Relying on being pretty will get you nowhere.

We live in a society that falsely glorifies pretty, and it sets us up for failure. Girls, you've got to have something beneath the surface of your looks.

The older I get, the more I notice that girls who’ve relied strictly on their looks for life success have fallen behind in the game of life. They've missed out. They invested so much of their energy into looking pretty that they became void of a personality.

A pretty face is nice. We all like to look at a pretty face. But after a few minutes, we get over looking at that pretty face. There are a million pretty faces in the world. We need more to sustain us. We need conversation, brain stimulation, pearls of authentic laughter and passionate debates.

Strive to be more than pretty.

Strive to be a Miranda, even if you look like a Jade. Because Miranda is now a f*cking superstar. She sings in a band, has a huge following and the coolest lover. She's traveled the world. She lives a rich, amazing, colorful life.

And I don't f*ck with pretty anymore either. And I'm far happier as a wild individual than I ever was as a typically "pretty" drone, longing for societal validation.

My personality, self-expression and opinions are the baseline of my life. Reading books, cultivating a unique style and developing meaningful relationships got me where I am.

Pretty never did a thing for me. And it won't for you either.

*Name Has Been Changed