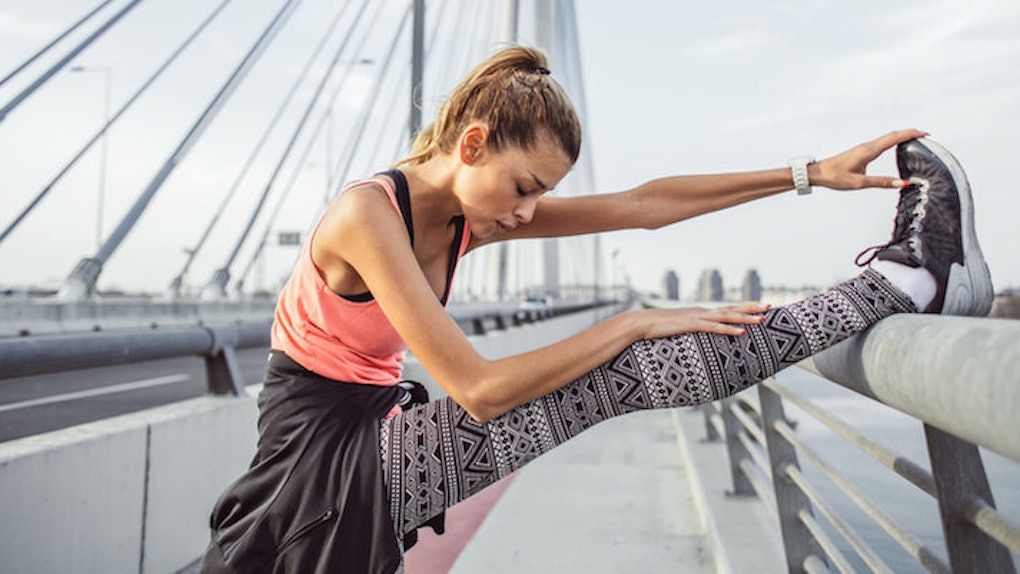 Anyone Can Do It: How I Went From Binge-Eater To Mile-Sprinter

Growing up, athleticism was not my forte.

I was in cheerleading from second grade through senior year of high school, a sport I loved and was challenged by, but still, to this day, can’t say with confidence I was spectacular at.

I couldn’t tumble (see: do flips); I was a mediocre flyer (see: girl who gets tossed in air), and I didn’t look great in the uniform (see: FUPA).

Gym class was a nightmare in and of itself. After many failed attempts at laughing off my ineptitude, I surrendered to the embarrassment and ceased putting forth even minimal effort.

Couldn’t hit a ball. Couldn’t run a mile. Couldn’t play goalie. What the f*ck could I do?

The answer to that question was eat. I could eat like one of the guys and I did so with no qualms.

It will sound like a humble brag to say that standing at 5’4", I never reached 130 pounds. But, believe me when I say, I was fat. I had absolutely zero tone or tightness to my body. I had a gut and thighs that would make any girl hide come bikini season.

I had no energy whatsoever, which is certainly a physical ailment, but it pulled at my emotions constantly.

I lacked confidence. I was in such constant distress about being attractive enough for my boyfriends, it destroyed my relationships.

I also lacked motivation. Excelling in school always came easily to me, so I procrastinated and blew off every test or project.

I never reached the potential I could have, had I had a driving force of structure and determination in my life.

It wasn’t until freshman year of college I was hit with the realization that if I continued eating like I did and not exercising, it was only going to get worse.

My energy, confidence and motivation would fully drop as my weight went up. I watched my mom completely transform her life from heavy to healthy, and I decided it was time I did the same.

I started using the elliptical (on a ridiculously low resistance because I didn’t know better) at the gym daily.

I was proud of my newfound consistency and dedication, but I was still eating like sh*t and not seeing results.

When we’d go to the gym, my best friend would always take the treadmill over alternative forms of cardio. Running intimidated me, but watching her was motivation to take it up myself.

This would take the absolute life out of me. I constantly left the gym discouraged at how long it was taking to build endurance, but for some reason completely out of my nature, I didn’t give up.

I started running the treadmill every day on the same 6.0 speed for as long as I could without stopping.

Before I knew it, I was running two miles straight. Something clicked when I hit that two-mile mark, and I started pressing buttons just to see what I could do.

Within a year’s time, I was running the treadmill at a 7.5 speed. I was so baffled at how I, the same lazy binge-eater two years prior, cut my pace by two full minutes in a year’s time.

Would this translate to outdoor running? Would I label myself a runner?

Would I put down the garbage and start eating clean? I had so many questions about what was to come from my life now that I found something I both enjoyed and was good at.

I started altering my diet and running outside. I lost almost 15 pounds. I felt like a new person, so liberated, confident and energetic.

I could wear form-fitting clothing without wanting to cry.

I could try new things at the gym because I had already gone through the process of being acclimated to something I couldn’t do; nothing could embarrass me now.

I consistently made dean’s list and tutored my peers.

I’m not sure I’ll run another race of that length, but I’ll always remember it as the moment I finally felt like I could surprise myself.

As I hone in on my 24th birthday and sixth year as a runner, I’ve come to realize that with all of life’s changes, running will always remain.

You can lose people, pets or opportunities, but running is always there. It’s like a shoulder to cry on at the end of a day that feels like nothing’s gone right.

Even if it's just a couple miles on the treadmill to start my morning before I head to work, I will always run until my body no longer can.