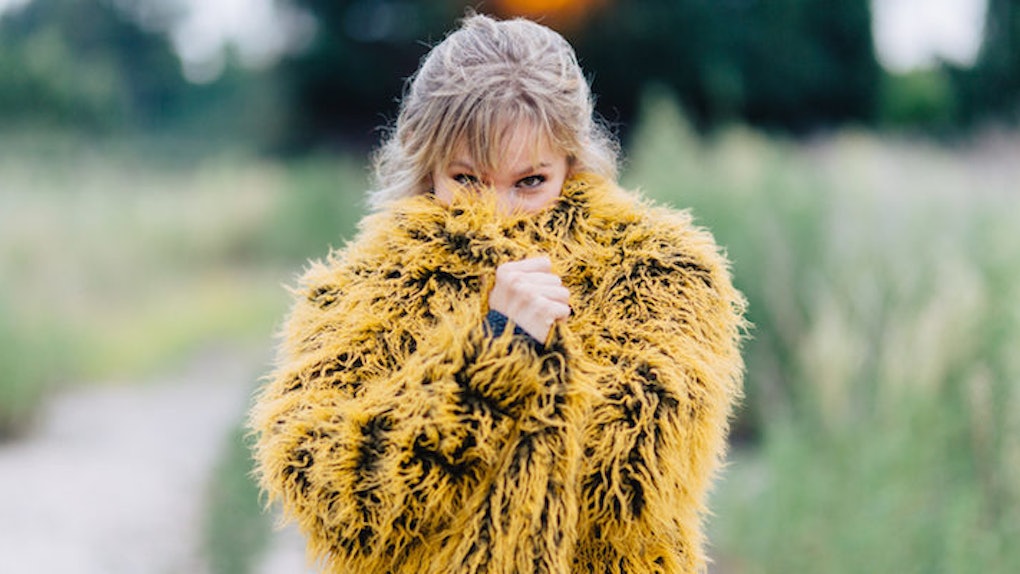 Can't Stay Young Forever: Why I'm Afraid Of Getting Older

The other day, I was at my grandpa’s house. My cousins and I planned to visit him because he hadn’t been feeling well as of late.

We sat around his bed, listening to stories from when he was young and stories about how easy we have it today.

My cousins pretended to listen -- they asked him questions and nodded occasionally -- but I knew after one look at them that they were all drifting off to other worlds in their heads. Drifting off to any world that didn't involve listening to their old grandfather tell antiquated, irrelevant tales.

I often forget how lucky I am to be young. And I try not to beat myself up for it; it’s an easy thing to forget in the hullaballoo of day-to-day living.

Our society puts so much emphasis on youth and beauty that I’ve become quite accustomed to, well, being young and beautiful.

Sometimes I wonder if I’d be less in tune with it if I wasn’t constantly reminded of it, from tabloids that not only track the progress of but cheer on Kourtney Kardashian’s post-pregnancy weight loss, to Gwyneth Paltrow crediting a greens-only diet for her youthful glow, to Taylor Swift being marketed as the biggest -- and coincidentally both the leggiest and one of the youngest -- pop stars in the industry.

When you’re young, the progression of time seems wholly unimportant. The future feels out of reach.

The thing about being young is it doesn't last forever. And the older we get, the more inclined we are to fall into snooze-inducing habits and ways of life. We become less alert to our surroundings, less willing to try new things. We become less alive.

Think about it: How much less interesting has Taylor Swift become now that she’s in a healthy relationship with Calvin Harris? The fact that she’s in a relationship is partly due to meeting the right guy, but it’s also partly due to the ticking of her biological clock -- which is ultimately due to her coming of age, her transition from exuberant girlhood into placid womanhood.

Though I know that youth and beauty aren’t the sole two qualities that define who I am (hey, I’ve got a brain, too!), that doesn’t mean that I’ll miss them any less once they’ve withered away.

As Lana Del Rey puts it: "Will you still love me when I'm no longer young and beautiful?" I am afraid of getting older, and of all the things that come along with it.

I’m afraid of not being “cute” anymore.

Listen, if dressing in head-to-toe bodycon were the “it” thing to do in your mommy years, I’d be all for growing older.

But it isn’t the “it” thing. It’s frowned upon as f*ck, and as much as I’m a proponent of dressing the way you want, whenever you want, I’m also well aware that wearing head-to-toe bodycon when you’re younger comes with way more perks.

I know someday, I’ll look back on the body I used to have and the person I used to be in that body. I’ll miss her and everything she represented.

I’m afraid of no longer having an excuse to be wild.

Being a rebel in your 40s hardly makes you cool; it just makes you a hot f*cking mess.

You know what I’m talking about: that wrinkly guy on the train, with quarter-sized piercings up and down his ears and human-sized tattoos down his back who’s doing his best to discreetly nurse a Heineken wrapped in a brown paper bag.

That guy probably spends his days getting hammered and his nights doing just the same -- with one day blurring into the next -- and from what I’ve heard, that’s anything but a normal lifestyle post-college.

All my friends will eventually get married, and I’ll eventually lose them to men and babies. My life will become a never-ending string of rehearsal dinners, weddings and baby showers.

And though I'll be happy for my friends, I’ll also be mourning the loss of them.

Nostalgia of the bonds I once shared with them will hit me hard, and it will seem like my world is falling apart, like I have to admit defeat to a force stronger than adventure.

I would do anything to be able to forever keep my vigor and vitality.

I’m afraid I won’t live up to the expectations society has set for me.

With so much pressure to be “perfect” and so little time to mold into said perfection, how can one help but feel anything but fear? Fear of falling short? Fear of overshooting the mark? Fear of being just enough, but subsequently nothing less of noteworthy?

In society’s eyes, being happily married with children means you've made it. But what if I'm not happily hitched and surrounded by a white picket fence by the time I'm 30?

I won't know until I'm older -- and that's the scariest part.