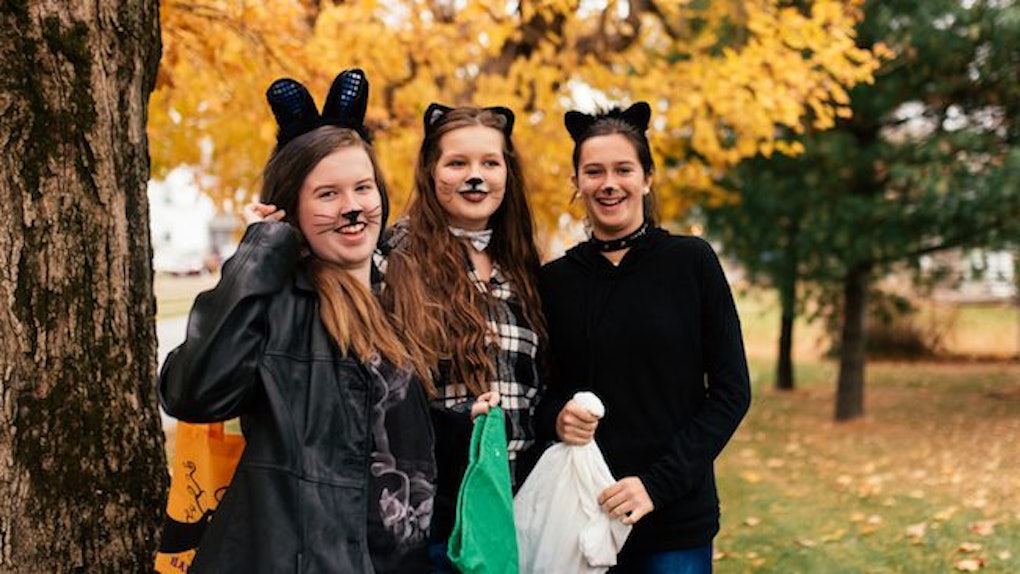 There's an art to being the third wheel. Trust me, I would know. Whether you're a third wheel in your group of three BFFs, or a third wheel because two of your friends are dating, it's not a fun situation. You find yourself awkwardly sitting alone at dinner, hanging out solo at a party in a corner, and of course, going on random trips in which you end up sitting quietly in the car while your two friends talk for hours. You've got to love it, right? OK, maybe not. Third-wheeling is rarely a walk in the park, but it can be especially rough when it comes to figuring out three-person Halloween costumes.

Serious question: Who decided three-person Halloween costumes should be a thing? Actually, who let three-person friend groups be a thing? It's so much harder than a BFF duo or even a squad. You can skip right past all of the iconic costumes: forget Cher and Dionne, Mean Girls, Spice Girls. There's either too many of you, or too little. And if you're the third wheel with your BFF and her SO, you may as well just wear your everyday clothes, because good luck with that costume.

But it's not completely hopeless; you've got a few options to choose from. There are (at least a few) iconic trios, and if those aren't working for you, you'd be surprised what you can get across in a three-person costume. So don't despair, because these 12 three-person Halloween costumes are here to save you from a holiday of being the odd one out, once and for all.

1. Taylor Swift Through The Eras

Are you and your friends a cute trio? Go for this awesome trifecta of a costume.

Baby Swift, Red-Era Swift, and 1989-Era Swift can complement one another quite well.

Get it? Tetris? Because of the three of you fit together so well?

Yeah, I know it's lame. But you can't deny it's still a really cute costume.

Got some artsy peeps among the three of you? Go for this DIY Stranger Things logo

You can't even tell who's who, so there's no awkward third-wheeling to worry about.

Get trendy and be a few cans of La Croix. It's modern, it's fun, and there's no limit on the flavors.

Plus, if you're unlucky enough to be not just a third, but a fifth wheel? No problem. You've alway got La Croix to save you.

5. Three Of The Muses

So, we all know that, technically, there are five muses in Hercules. But we all know them so well that you can get away with just three. Don't forget to bring your singing voice!

The secret here is uniformity. You can't be an outsider if there's no "outside," right?

Plus, no one cares if there's two plastic army men or three.

7. Alvin And The Chipmunks

Everyone forgets about these three guys, but if you're looking for a pop culture costume for three, this is a pretty easy one to go to.

It's simple, you can get the materials from a thrift store, and the pictures will be priceless.

8. Cruella Devil And Her Puppies

Sick of third-wheeling? This one's a real easy fix.

Pick a costume where the the third wheel is actually the star of the show. #Winning.

Sing for me, Paulo!

Get your BFF and her BF in line. No more third-wheeling this time -- it's his turn.

There's no way to go wrong with this costume. An all-black ensemble and the emojis of your choice make for a super easy, cheap, and quick costume.

Each of you can go as your favorite emoji, or you can make a phrase and have others guess the meaning.

Of course, there's enough room here for a group costume or a trio costume. Plus, it's easy to DIY. YouTube has tons of advice on how to get started.

Honestly, Thing 1 and Thing 2 never get old. I don't envy the person who has to be The Cat in The Hat (that hat looks itchy and hot), but you can draw straws, right?