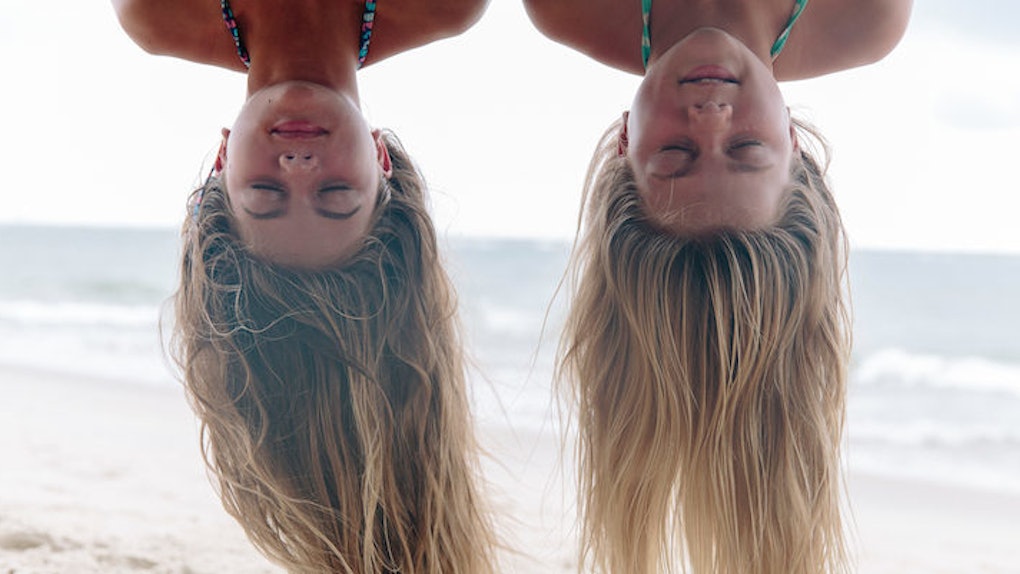 10 Of The Most Annoying Comments Twins Are Tired Of Hearing

Most people like to call their best friends their other halves; the yins to their yangs; the peanut butter to their jelly (a totally underrated sandwich, by the way).

But, how many people do you know who actually have other halves, best friends by birth? Someone like me, who was blessed with a wombmate, a twin sister?

A twin sister is a rare title; it's one I am proudest of and take seriously. It's funny, considering it took zero effort on my part to become a twin, so props to our mom.

I didn't know National Twins Day existed until this year.

So, in homage to a glorious existence that would mean nothing without her, here are 10 of the most skin-crawling, over-asked questions my twin sister and I have spent 19 years answering regarding the twinosphere.

You'd be surprised how often I hear this. No, we are not identical twins, considering I have a d*ck, and she doesn't.

All crudeness aside, this makes us fraternal twins. It is, in fact, not possible for boy-girl twins to be identical.

This is all determined by how the adorable babies are formed. Identical twins have to be the same sex because they form from a single zygote that contains either male (XY) or female (XX) sex chromosomes.

So, short answer: We're fraternal. Thanks for taking an interest and trying to make light conversation, though!

How are you supposed to put something so normal into words?

For my entire life, I've had a twin sister, and I know nothing different. I suppose the only way to put it is it's like have a sibling who's the same age as you.

Yeah, that's the best I can do. It's not even a fair question, and of course, I'm going to sound ridiculous attempting to answer it.

Go on, I'll wait for the answer. You don't have one? I thought so.

Well, no. We're human beings who have two separate bodies.

It's not like if I pinched you, one of your siblings would feel it. Why would it be any different for people who just so happen to be twins? Once again, I attribute this mainly to people trying to be funny and make conversation, but just know you're not being original.

If I pinch you, do you stop pestering us with annoying questions about being multiples? You don't? God dammit.

4. Can you read each other's minds?

Much like our disappointing inability to not feel pinches from one another, my sister and I cannot read each other's minds.

We are not conjoined, and we are fortunate enough to have our own bodies and minds, just like other singleton children. And because we haven't had toxic waste spilled on us and are not hybrid, mutant, sent-from-another-planet superheroes, we are, unfortunately, unable to read one another's minds.

Leave telepathy to the movies. Sorry if we don't live up to your expectations, but we're pretty much average. Super powers sold separately.

5. Do you do everything together?

Oh my god, like, totally. We never grew out of sharing things, and after all these years, we still sleep in the same bed.

No, of course we don't do everything together, considering we're individual people who go to different colleges, have separate interests and even have varying friends.

Although, when we were younger, there was bit more of an attachment factor due to constantly being around each other. But, just like other kids, we grew up, developed hobbies and skills and got involved in contrasting activities.

We paved the way for people to view us as an individuals. So, to answer your question, no, we do not do everything together.

Do you ever fight with your brothers and sisters? Yeah, I figured. Twins are siblings too, so yes, from time to time, my sister and I will have an altercation.

To be honest, you'll get into scraps with anyone you have to live with.

Sharing a space can be suffocating, so you're bound to jump at someone's throat once in a while. My sister and I were not afforded mystical, magical immunity to irritation and fighting simply because we're twins.

Once again, being a twin stripped me of my individuality, and it has become an identifier.

Would you say to someone, "Nice to meet you. Now, you're the middle child, correct?" Probably not, as that would definitely come across as rude and slightly weird and invasive.

However, I appreciate you remembering something about me, but the whole using "twin as a memory" mechanism is a bit overdone.

Try something more original, would you?

Is anyone really considered older when you share the same birth date?

This is a question that doesn't bother me so much, but I suppose that's because I am the older twin. (I'm older by two minutes, by the way. Hah!) I'm sure it drives me sister insane, though, because it only validates that she's technically the youngest of four.

But, once again, why does it matter? We have the same birthday, don't we? Isn't that entertaining enough for you people?

This is just one of those phrases that makes me feel uncomfortable. I think I usually conjure up some dopey response like, "Yeah, it's pretty cool."

What else am I supposed to say?

"It's horrible and God-awful. I'm actually planning my twin's murder as we speak — that's how much it sucks. You're the lucky one, I swear!"

I like being a twin, of course, but because that's all I've ever known. Being a twin is cool, but probably not for the wild reasons you're coming up with in your head as you utter these words.

This conversation makes me uneasy and forces me to twiddle my thumbs.

Why would that be? We don't just stare at each other all day. We have lives, and like I've said before, we have separate lives.

I live in New York, and my twin sister lives in Boston. It's not incredibly far away, but we don't get to see each other every day.

So, yes, at times, I'm sure we both get lonely.

And you know what's the roughest part? Being surrounded by friends you love with all your heart, but knowing someone's missing. Some days, you just want to see your other half, usually when you can't.

I know I get lonely, but that only makes the time I get to spend with my twin sister that much better. After all, she's pretty much the coolest person you will ever met, and she makes me proud to be a twin.