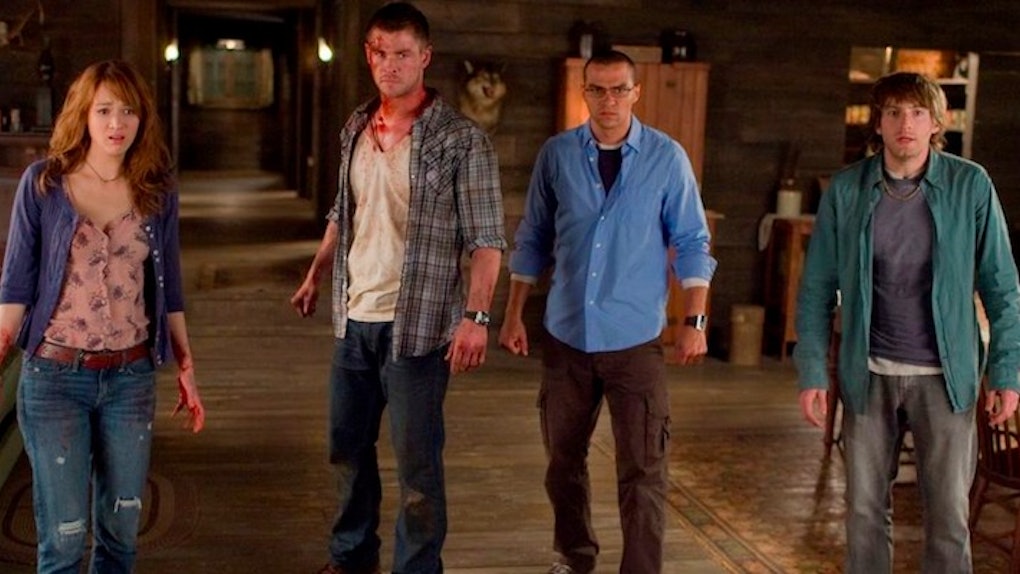 How Would You Die In A Horror Movie? Your Zodiac Sign Can Give You The Answer

Let me set the tone for this zodiac-themed horror story...

You and your friends are teenagers living in the suburbs. Just before school starts and you each leave your humble hometown for different colleges across the nation, you want to have one last celebration. So you rent a massive cabin in the middle of a picturesque forest that has a pretty good rating on TripAdvisor.

Unbeknownst to you, there's a savage murderer in these parts — one that reviewers on TripAdvisor failed to mention.

And as you all pull into the cabin's grounds, you collectively discover there's no signal or WiFi...

How do you fare in this plot? Find out below.

Fiercely independent, you're the culprit responsible for splitting up the group to cover more ground.

When does this EVER work in a horror film? Audiences don't witness your death, but you're found by the film's protagonist who shrieks at the discovery of your corpse. We don't know exactly how it happened, but you're definitely dead.

Toward the end of the film, you sacrifice yourself to save the lucky few who are still left alive.

As is usually the case, though, the killer has nine lives and somehow survives the cabin's explosion. Unfortunately, you do not.

You are the film's protagonist, the sole survivor.

After murdering the killer for the ninth and final time, you (tattered and exhausted) walk toward the police vehicles that should've arrived a few hours ago. Just as you're about to approach, however, you see the killer's hand twitch. Cue the credits.

You die toward the end of the film.

Just when you think the protagonist is about to bite the dust, you suddenly appear to save the day. Unfortunately, the killer now has his sights set on you and the protagonist runs away as you're being viciously stabbed and tossed into a bonfire.

The audience likes you.

There's a good chance you're going to make it out of this because of your inherent innocence. Unfortunately for you, about three quarters of the way through the film, your curiosity gets the best of you.

Upon hearing a sound you believe is made by an injured friend, you waltz right into a trap set by the killer and are viciously murdered as a sad, dramatic melody echoes throughout the theatre.

You're the pessimist of the group.

You don't really fit in, but are good friends with the protagonist. You don't make it that far into the movie because while everybody's getting savagely drunk on the main floor, you're inspecting the upstairs, where you're eventually confronted by the killer who was hiding in the closet.

You put up a valiant effort to defend yourself, but are ultimately tossed through an upstairs window where you're impaled by a rotted tree.

You're brave, but also kind of arrogant.

You think you've got this whole thing figured out. When you hear a noise outside of the cabin, the group darts indoors seeking solace in the living room that overlooks the lake.

“That's what he wants us to do!” you shout to the others as you're impaled by a machete, while your friends watch helplessly through the large window.

You're the first to go.

Fortunately for you, though, the first kill before the opening credits is usually one of the best. Your death sets the tone for the entire movie.

After taking a shower in the same cabin the cast eventually visits, you witness a shadowy figure outside. Scared, you rush to lock all of the doors wearing nothing but a towel. After the killer toys with you a bit, you eventually lose your towel and die completely nude. The film's title is then presented on screen.

You're the protagonist's best friend. You're also innocent, kind of helpless and kind of always having sex.

But you drink way too much too early on in the movie, and before the group even knows there's a killer on the camp grounds, you're murdered on your way to grab more beer.

You become the missing culprit that brews skepticism amongst the group.

You were notably absent through most of the deaths, and believed to be left for dead in the cabin early into the film's plot.

Except you weren't dead. Quite the opposite, actually. When just you and the protagonist are left alive, you reveal that you were the killer all along and foolishly reveal your motive in an unnecessary monologue.

As is usually the case, your speech is far too lengthy, which gives the protagonist the opportunity to kill you once and for all.

You're the film's comedic relief.

But as you know, the funny character never lives even though the audience certainly loves you.

About halfway through the film, when the movie's tone changes and there's no more need for humor, you're killed just as you make one last joke that audiences appreciate, spewing blood and dropping to your knees.

Your death is second and sorry, but it's somewhat insignificant.

You're not even amongst the group of teens visiting the campgrounds but are instead a forest ranger, or something. As you go to check in on the teens who are making far too much noise, you meet your maker before you make your way to the front door.

Your body is discarded, leaving just a trail of blood in your wake.