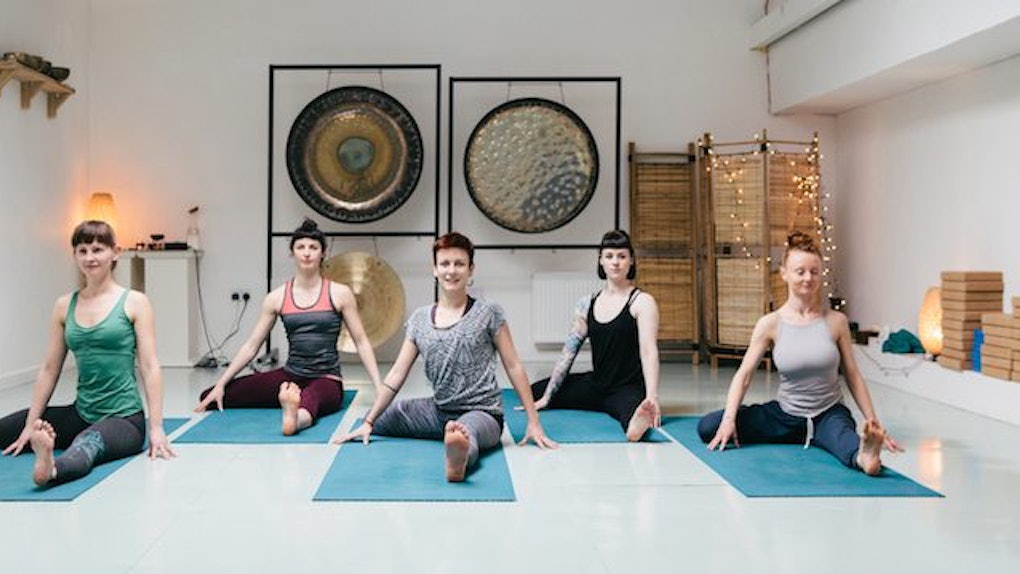 Yoga Is Looking Desperate With All These Weird New Classes

According to Yoga Alliance, there are 76,000 registered yoga teachers and 5,000 yoga schools in the US.

But, all it takes is a few swipes through someone's Tinder to see that yoga hasn't lost its popularity.

Every other profile has a pic of someone doing wounded seagull on a mountaintop (editorial note: "wounded seagull" is not a real pose), and yoga as a practice doesn't show any signs of slowing down.

I can't tell if this is a way for yoga teachers to make a name for themselves and stand out, or if the yoga community suddenly said, "You know who we need to extend an invitation to? Goat people."

What all these classes do seem to indicate is that either yoga is hitting a plateau in popularity, or the whole industry is just getting thirsty as hell for new recruits.

Here are just a few of the weird AF yoga classes out there in the world today:

This is the perfect option for people who smoke so much weed that their blood has stopped circulating.

Basically, if you have a boyfriend with no upper body strength, this is a great way to show him what arms are for (other than lighting up and ripping on a bong.)

The best part is, instead of leaving your favorite vice at home, you bring it with you.

There's no excuse for not going, which is good because potheads love cancelling plans.

Tantrum yoga is basically yoga with yelling, although they probably like to dress it up in a yoga way, saying something like, "It's not yelling; it's releasing the pain from your childhood."

It is yelling, though. It's yelling and stretching, which is great for people like me since I've never met a yoga teacher I didn't want to yell at.

Of all the niche yoga classes out there, this has to be the most disgusting.

Yoga is already a farting fuckshow, but when you add bubbly poison into the mix, it gets even worse.

So, why still market this as trying to achieve a higher state of consciousness?

I mean, just stay home and have a beer. Stop farting on strangers and calling it enlightenment.

(On the other hand, what's more enlightened than farting on strangers? I kind of changed my own mind while writing this.)

Out in Montana, Flow Outside offers an outdoor snowshoe-yoga hybrid class for people who aren't afraid of pulling a muscle in 5 feet of snow, miles away from their houses.

Getting back with a twisted ankle shouldn't be a problem, though, as mountains are really easy to slide down.

There's "outdoorsy" and then there's "out of your fucking mind," and this hip new workout trend offers something dangerously fun for both.

The best part of the program is that the $20 class participation fee goes straight to the care of the cats and kittens. All classes are taught by a certified yoga instructor who is a shelter volunteer and donates her time to teach.

That's pretty cute, but sanitary it is not.

But, they are finding homes for cats by the dozen, and that is a great thing.

With all these classes, I think it's time we start thinking about yoga as something more than a higher spiritual practice and recognize what a lot of it has become: a massively profitable health trend.

Sure, there are those who still buy into the "ancient spiritual practice" bit, and hey, if it works for them, great.

Yoga has helped a lot of people, and I won't invalidate those experiences because I've been to therapy and know I'm a devaluing narcissist.

But in my opinion, people who practice yoga are no more spiritual than those who worship Nascar.

They're both gigantic commercial ventures. The only difference is, one is sponsored by Lululemon.