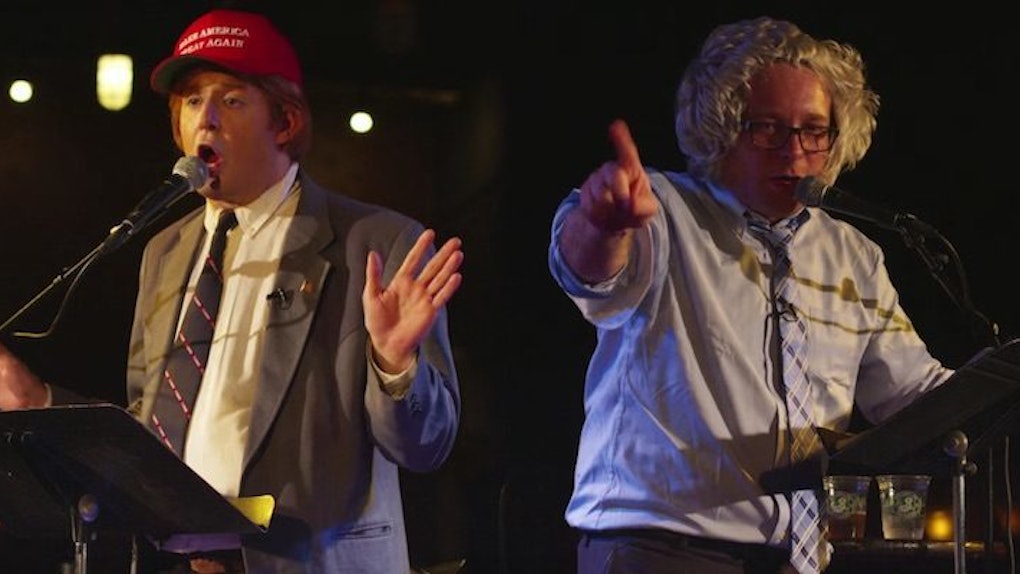 I can't count the number of times I've gone to distract myself on Twitter over the past few months only to discover people I've been meaning to unfollow serving up their scalding takes on every word uttered at the latest presidential debate.

I've come to realize these tweets have a lot in common with the debates that inspire them -- there's barely any time between them, they don't contain anything particularly profound and most of the people who are participating are really just in it for themselves.

I've barely tuned into any of the debates because sitting around for two hours listening to the Republican Party take part in what can only be described as a poorly planned reboot of MTV's "Yo Momma" starring Wilmer Valderrama every time the candidates manage to make it on stage.

However, last month I had the opportunity to watch Donald Trump and Bernie Sanders go head-to-head on stage for almost two hours in New York City. And, after that experience, I can safely say it was the one debate everyone in America needs to see.

You might be wondering how you didn't hear about a debate between the two cotton candy-headed stepchildren of the Republican and Democratic parties, especially when neither man has gained an official nomination, and the answer is simple: It didn't actually happen.

What actually transpired was a largely improvised exchange between comedians Anthony Atamanuik and James Adomian, who (respectively) play the title roles in the "Trump vs. Bernie" debate tour that is currently entering its final leg on the West Coast.

Larry David has rightfully garnered a lot of attention for his Bernie Sanders impression, but Adomian -- who came on stage in a cheap wig clutching a stack of papers and manila folders -- managed to encapsulate the essence of Sanders unlike anyone else.

Adomian focuses as much on the physical appearance and quirks of the Democratic dark horse as he does on the senator's philosophy, which became incredibly apparent when he applied Sanders' fiscal policies to foreign affairs by proposing ISIS stop beheadings in favor of cutting off the bottom five or 10 percent of people's bodies.

Atamaniuk needed a bit more makeup work than his opponent to transform himself into Donald Trump, but it's virtually impossible to differentiate between the two men with your eyes closed -- and it's not only because of the similarity in their voices.

Throughout the show, Atamaniuk's portrayal of Trump was almost single-handedly responsible for every awkward moment or wave of uncomfortable laughter sparked by seemingly inflammatory statements reflecting the hyperbole and rhetoric Trump has employed throughout his campaign.

He consistently pushed the candidate's tendency to rely on sexism, racism and xenophobia and was met with a fair amount of groans for bits about Trump having sex with his daughter or annually adopting a minority child and putting it down the recycling shoot of the Trump Tower.

Atamaniuk seemed to take pleasure in these moments and managed to remain in character while reminding the audience every word to leave his mouth was inspired by a very real thing Trump has said in the past.

The humor of the Sanders' character was primarily derived from Adomian's ability to capitalize and riff on the idiosyncrasies that have catapulted him into the national spotlight over the past few months.

The same could be said for Trump, but even though there was humor in the shock and surprise of Atamaniuk's outlandishness comics, it was to0 difficult to ignore just how many of them were based in reality -- a reality that becomes more and more uncomfortable with each new poll and primary.

Atamaniuk addressed this uncomfortable dichotomy at the end of the show, essentially dropping the character in his closing statement before passionately pleading with the audience to realize the character he was playing literally reflected the character of the man inching closer and closer to becoming the President of the United States.

In addition to being the most entertaining political debate I've had the pleasure of watching, it was also one of the most sobering. Even if you haven't tuned into any of the real debate, this fake one deserves your attention.

If you can't make it to the remaining shows, you can expect to see more from the duo in the upcoming weeks since Fusion announced it would be producing a series of videos based on the debates.

Until then, here's a clip to give you a taste of what you're missing.