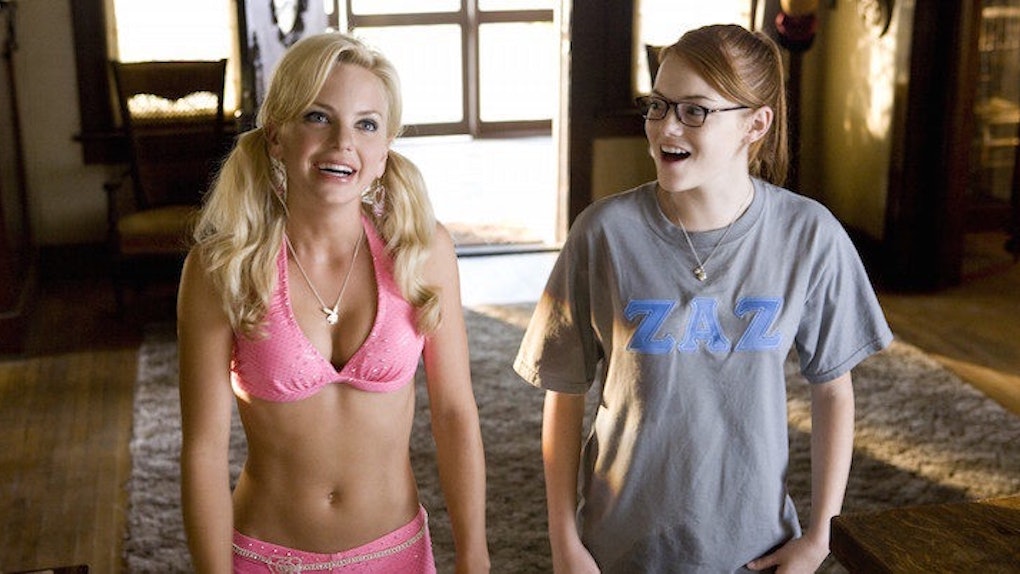 I obviously cannot speak for you because I don't know you or where you grew up, but my extremely strict Catholic school upbringing didn't leave a lot of room for being sexy.

But then I went to college, and it was time to go BUCK WILD.

Bandage skirts? Check. Grinding? Check. Making out with a virtual stranger in the middle of a party? CHECK.

Obviously, the problem here is, none of those things are actually sexy. In fact, they are the antithesis of sexy.

But how was I supposed to know? I was just trying to figure it all out for myself, and all I really had to go by were other freshmen girls who were also failing miserably at their attempts to be sexy.

So, without further ado, here are 40 things college students all mistake for "sexy."

2. ABC-themed parties (aka Anything But Clothes).

4. Shirts you ripped to be crop tops.

6. Ripping the same amount of shots as your crush.

9. Covering your dorm room walls in “hot” photos of you and your friends from high school.

12. PDA outside your dorm room.

14. PDA outside your class.

19. Flirting with your professor.

21. Taking a million "hot" pictures of you and said crew before you go out.

21. Taking a million "hot" pictures of you and your crew before you go out.

22. Making out with someone else in front of your crush.

23. Wearing the frat pinnies of guys you barely know, just to make it look like you hook up.

24. Proudly walking around with a hickey from last night on  your neck.

25. Getting hickies in general.

28. Funneling or shotgunning literally anything.

31. Flirting with the bouncer to get into the shitty dive bar that lets in literally everyone.

34. Going out on weeknights.

35. Waking up in a random stranger's bed.

37. Almost having sex with your formal date on the bus there.

38. Wearing a dress so short your panties are out for half the night.

39. Attending parties with themes such as "CEO Bros and Office Hoes" and dressing to theme.

40. Wearing a bathing suit to a party where there would be no swimming pool.