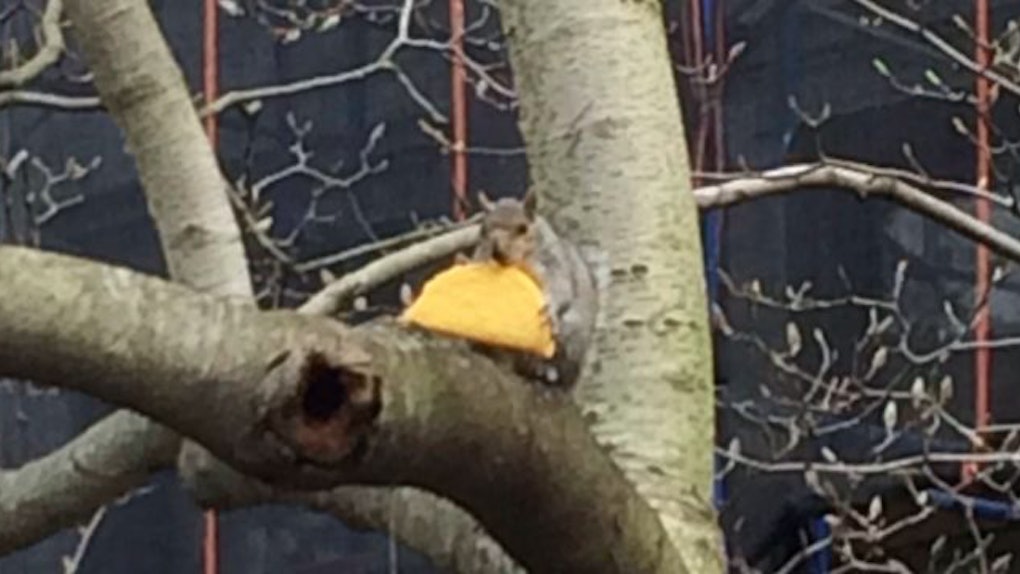 This Squirrel Eating A Taco Is Inspiring

To describe this week as a difficult one would be a gross understatement.

The seven days that took place between this Friday and last Friday were filled with so many awful things that listing them would take up this entire article, so let's just agree the week sucked.

And what do we have to say to that? Thank God it's Friday.

But nothing really says "I have been having a rough time" like grabbing a taco and hiding in a tree.

Granted, when a human does it, it's a little weird – but a squirrel can get away with it and look chill.

In Brooklyn, a squirrel was seen hanging out on a branch, clutching a hard shell taco with its paws and mouth.

And even though the taco is roughly half the size of our new animal obsession, Taco Squirrel looks unafraid and ready to tackle the angry bowels he will undoubtedly experience if the taco is from Taco Bell.

JK, we love you, Taco Bell. Never leave us.

So with Pizza Squirrel, Pizza Rat and now this, maybe we can speculate Mother Nature is stress-eating.

Anyway, Twitter had a field day with this, naturally.

I mean, remember the fuss over Pizza Rat?

Quick refresher: there was a very brave rat dragging pizza down the stairs of a subway station (probably at 2 am after a long night of partying with the gals).

And that's not the only cute animal enjoying giant hunks of human food. Have you ever heard of Waffle Squirrel?

What about dear old Bagel Pigeon?

Yeah, me neither. But sharing space with our vermin friends must have caused them to to love the same things we do, and it's kind of cute.

Well, if you ignore the fact that these foods are horribly unhealthy for them (and us), that is.