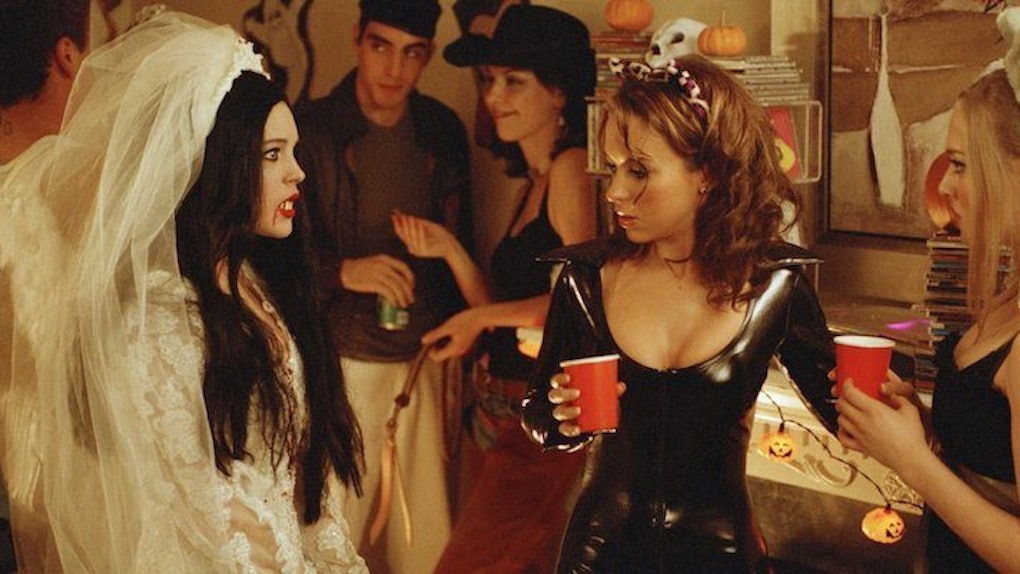 Adulthood is all about honesty. And if we’re being honest with ourselves, we were little sh*ts once upon a time. And not just sh*ts, but sh*ts and whores.

Now, there’s nothing wrong with being a whore, especially on Halloween. What was wrong with it was that we were just so lame.

But that’s because, if we’re still being honest here, Halloween isn’t about the costumes or the candy -- it’s about the sex.

We used it to be the sluts we always wanted to be. Some of us have trouble expressing ourselves without the plastic handcuffs and kitten ears, so this was it. We got our metaphorical D’s wet, and we loved it.

We think we’ve grown out of that now. We look at Facebook now and judge our younger cousin for wearing the sexy cop costume, but we were no better. There came a time when all of us adorned the tight plastic and limited fabric for a night of nasty fun.

The sexy costume you went with back then says a lot about where you are now.

I mean, what you chose then, who you thought represented your inner wild child, is respective of the tamer adult you’ve built your “responsible” relationships on now.

Kitty: As lazy as the costume

You still put about as much effort into your relationships as your costume. It's one of the easiest costumes to pull together, and you’re all about limited work.

You like things to come naturally and don’t plan on putting too much work into any man or woman. Of course, once you do decide to pounce, you’re about as loyal and unpredictable as a cat.

Indian: If Indians had diamonds and Mercedes

There’s only one part of you that’s most likely native (you know what I’m talking about).

You have no problem misappropriating gender stereotypes now as you did cultural ones back then. You like playing up to a role, and as a woman, you use it to get what you want.

You know about as much about relationships as you do about administering an IV drip. You may play the caretaker, but you like being taken care of. You love drama, even if it means you’re more similar to a psych patient than a nurse.

If there’s a tie with kitten for least original costume, that’s you.

To be fair, the only girls who wore the schoolgirl costumes were the girls with the extra uniforms lying around. Thus, you’re about as kinky in real life as you were in your “costume.”

And that schoolgirl mentality is still there (and your plaid).

Devil: Because angel is too much of a stretch

You pretty much stay true to your character. I mean, you already had the red dress, or you bought one because you thought it was practical, which means you’re still as dangerous as you thought you were back then.

Also, we all know it was our dirty friend who wanted to play the devil when the costume was suggested.

Angel: Not the Victoria's Secret kind

For your sluttiest costume, you wanted to be a saint. Really? That’s what you went with? You’re a prude.

Not only that, but you had no problem sharing the spotlight with your sexier counterpart. True to your Halloween fashion, you’re still easygoing and most definitely on the prude side.

Bunny: Most likely graduated to real one

If you didn’t think you were a Playboy bunny when you put on those ears and meticulously placed cotton balls, you’re lying. So you’re not just closeted kinky, you’re full throttle.

You have no shame and absolutely no intention on throwing that outfit away (or your dreams of being in that Playboy mansion).

Cheerleader: Still loves to sit on top of it

Like your homemade schoolgirl costume, you had this outfit already in your closet and in your repertoire. Unlike the schoolgirl though, you don’t pretend to be innocent. You’ll happily climb atop erect pyramids whenever you get the chance. You like to keep your routine fresh and your men (or women) in rotation.

You do as much for your community as you do in your relationship.

Maybe you’re sweet at heart, but you’re also starting as many fires as you’re putting out. You have a flair for the dramatics and can’t help but bring your innocent partner into it.

Let’s just say you’re never one who burns with desire, but burns down everything around you until there’s no desire left.

To be honest, the women who play the toughest on Halloween are usually the meekest in real life.

You probably never used those handcuffs and probably never have been arrested. In fact, Halloween is probably the only time you let that sexually starved prisoner out.