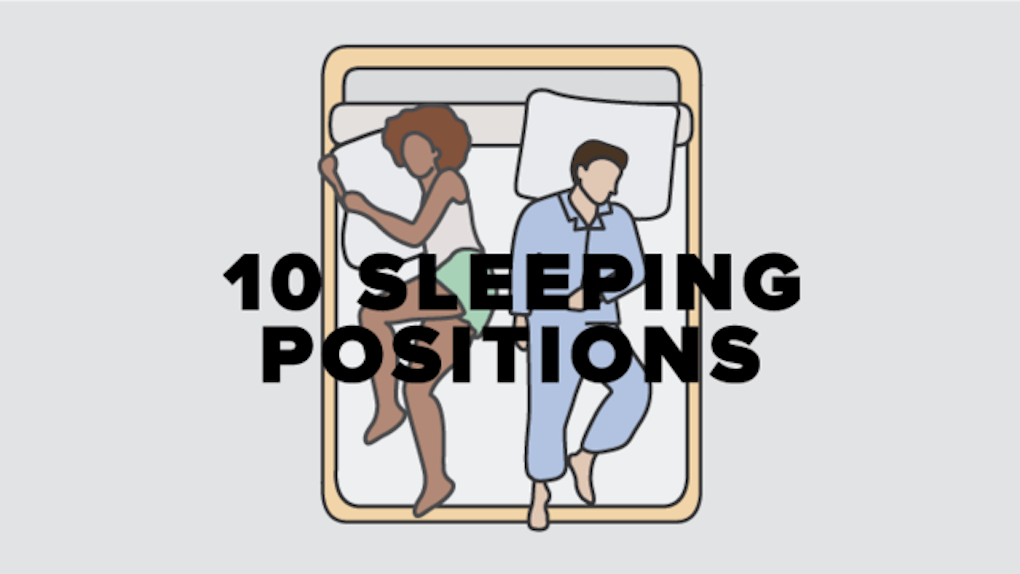 The worst part about sleeping with someone is the actual sleeping. The sex is over, which means there's nothing to look forward to except the devolution of intimacy into a sweaty mess of limbs.

In the movies, the morning after the leading man has sex he springs to the door in a velvet bathrobe, greets the mailman like he's not obsolete and takes a swig from his mug like he harvested the beans.

In reality, the morning after sex, you ask how your partner slept, they say “fine,” you say “fine,” and you're reminded of that lie every few hours by the violent urge to collapse onto your keyboardddddddddd.

Whether it's someone you've been with for years or someone whose first name definitely starts with a “J” (Justin? Jonathan? I'll just call him “Hey”), here are a few types of people you become when sleeping over.

“Oh God, she probably thinks it's like this all the time.”

You've already had sex and since putting on clothes requires effort, you go to bed naked. But your man is wide awake with paranoia, worried that if your thigh touches his diminished member, recency bias will take over and you'll leave thinking, “I don't know if he was ever hard.”

Maintaining an all-night erection is exhausting but he'd like to see you again, so he pops a Viagra and hits the pillow hard.

“That furry thing better be his foot.”

You went to the bathroom, you brushed your teeth and took your contacts out. You gave him all the time in the world, yet you come back to bed and he's still sporting his Golden Toes.

You think about asking him to take them off, but you don't want to be rude, so you pop in your retainer and whisper “sthweet dreamths” just to guarantee morning sex is off the table.

The toll singles pay for sex is a restless night of clammy anguish, and anyone who says otherwise is probably The Problem.

An aerial view of the bed reveals your partner starfishing naked across 90 percent of the mattress and you curled up like a hermit crab on the margins of sleep and sanity.

“I sure hope she's comfortable… I can't feel my arm.”

To be a gracious host (or guest), you fall asleep in a contorted pose to accommodate your partner. Your sleep is fitful and filled with nightmarish scenes from “127 Hours.”

You wake at 2 am with no feeling below your elbow and you start to wonder what's more valuable, your pale limb or the possibility of doing this again sometime.

You've gone the entire date without breaking. The dinner, the walk up the stairs, even the sex. But when you wish him "goodnight" and turn on your side, that's when the winds come.

You did it with the lights on and stared into each other's souls, so why do you feel most vulnerable now? You don't even fart around your family. This is a big step in your relationship. “Oh my God, does he think we should move in?” you wonder.

He lets out a toot, and it's settled. You're getting married.

At 3 am you wake up drowning in a pool of you, and that's just when you're alone. You're boiling but you're also naked, which means you've reached the end of the line. This night's a wash in every sense of the word.

You roll over to check that it's not just you, but your partner is somehow wrapped inside the sheets, the comforter and the fuzzy blanket you reserve for power outages. So, it is just you.

In the morning, he glances at your second cup of coffee and suggests you lay off the diuretics. “Honey, I'm not wetting the bed, I just run hot!” “Alright,” he says. But he'll never understand.

“I know we're being cute, but we also need sleep.”

After one year, you've both agreed neither of you has to prove anything to the other.

You know his arm around your waist has no bearing on whether he thinks you're fat and ugly, and he's figured out you actually like him without having to shove your butt into his crotch. You both have work tomorrow and you need your rest.

You kiss goodnight, disengage and roll onto opposite sides of the bed like parallel coffins for the best sleep of your lives.

You made the mistake of falling in love with an investment banker and every time you bang, you feel like he's preoccupied with work. Before he even finishes, he dismounts and starts checking the NASDAQ on his phone.

He's long forgotten neither of you came. The only thing that gets him off is thinking about how hard he's going to f*ck that company that just went public. Hello, bonus!

Three months into your relationship, you two decided to role play as student and teacher to keep the fire alive.

You played the teacher and your partner, the naughty schoolgirl, but she got way too into the role and actually produced a poem written in gel pen. She made such a compelling argument you raised her grade a letter and said, “I'll see you tomorrow, Susanne.”

Her name's not Susanne. And you two didn't have sex. What the hell just happened?

“Another day in the trenches.”

Two decades of marriage have conditioned you to think warfare and sleeping are mutually inclusive. Love is a battlefield, and the sheets are the frontlines. Much like WWI, neither party gains much ground and both leave dissatisfied