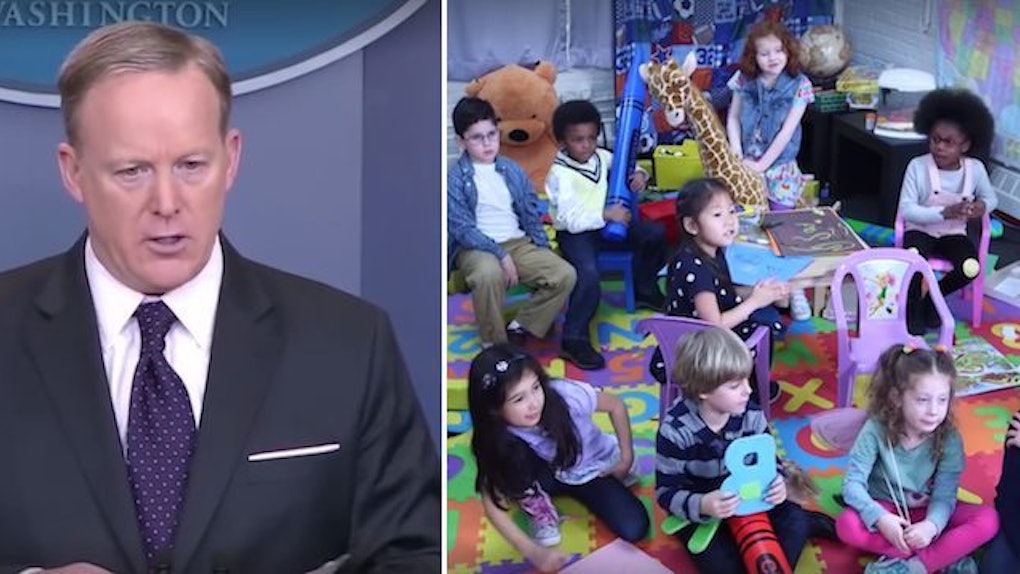 Have you ever actually sat through an entire briefing? It's like sitting through Thanksgiving dinner immediately after someone like Donald Trump is elected president of the United States -- a hot mess.

By now, we've all become used to Spicer's daily televised circus. I'll never be immune to the total chaos incited by political banter at the dinner table, though.

I think we owe Melissa McCarthy and "Saturday Night Live" a big thank you for helping to satirize Spicer's aggressive, erratic approach as he "answers" questions from sometimes overeager reporters.

A new parody sketch of the White House Press Secretary's infamous conferences will soon be deserving of a million thank-yous.

Why? It doesn't feature any "SNL" legends, but it does feature a bunch of kids!

I think we can all agree Spicer's briefings are incredibly similar to the scene inside of a kindergarten classroom.

Thanks to "The Daily Show," we now have an accurate portrayal of what it would look like if Sean Spicer were talking to a classroom full of kids instead of fed up reporters simply trying to do their jobs.

Similar to his briefings IRL, Spicer isn't a fan of "follow-ups" in this sketch.

The hilarious clip begins with host Trevor Noah revisiting a few of Spicer's dramatic moments during his daily briefings over the last few months.

Halfway into the clip, the parody begins with Spicer calling on a member of the press pool to ask a question. Only, there are no reporters sitting before him this time around. They're kids, and they're keeping shit real AF.

GEEZ. Will someone slip Agent Spicy a chill pill?!

I mean, all I've gathered from that piece of comical relief is Sean Spicer is in dire need of a Xanax (or five). Either we're all too sensitive or this guy's seemingly nonexistent patience is insanely fragile...

I'm going with the latter on this one!