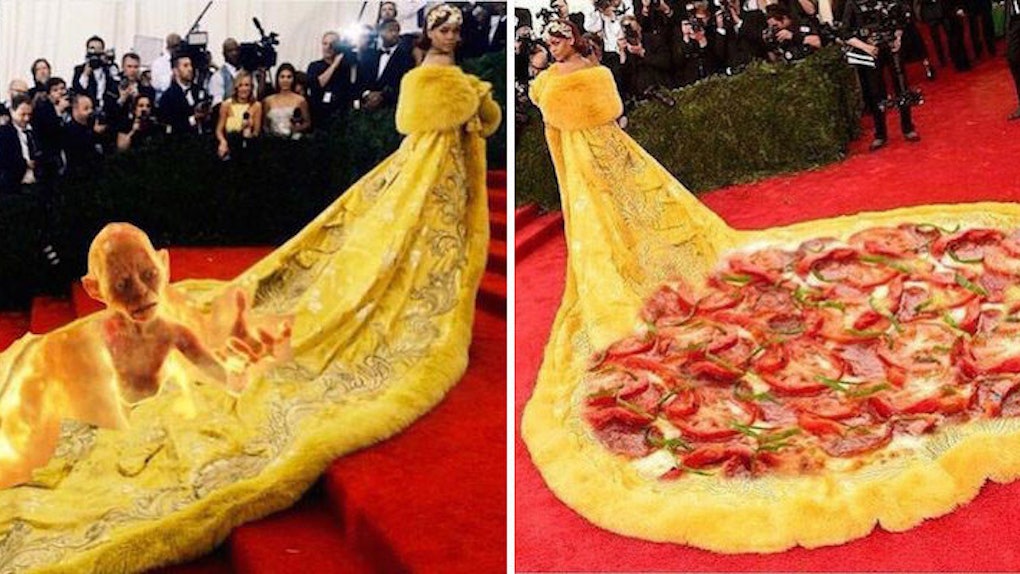 So, it was the Met Gala last night. The Met Gala is one of those events that is so upstaged by famous people posing for pictures, its actual purpose becomes irrelevant.

Technically, the Meta Gala, also known as the Met Ball (according to my friend Trevor J. Wikipedia), is a fundraising benefit for the Met's Costume Institute.

This year, the theme was “China: Through The Looking Glass,” and that gave everyone the rare opportunity to wear racist clothes with some impunity.

But, the big meme-splosion came from this pool/tarp-sized gown of mass destruction Rihanna dragged around.

Most of the meme-ing was, of course, egg-themed.

How to make an Omelette ft. Rihanna #metgala pic.twitter.com/8itDtdDwOg — Danny (@iseewonderland) May 5, 2015

Because her dress looks like a giant, inedible omelet.

She also looked like she hunted and skinned this large yellow bird that is native to New York.

Ugh, I've always wanted to use one of these.

In case of an emergency please take your shoes off and escape using the dress provided. #MetGala @rihanna pic.twitter.com/3EBzFwOunF — The Scoopla Show (@thescooplashow) May 5, 2015

She also looked like Zeus asked her to hold one of his condoms.

"One RiRi to rule them all."

Seriously, people are very stuck on the egg thing.

Rihanna showed up to #MetGala looking like a fresh cracked egg pic.twitter.com/Qt2RRBfPxj — Ëv (@JustDoItEverett) May 5, 2015

And finally, it's not delivery, it's RiGiorno.