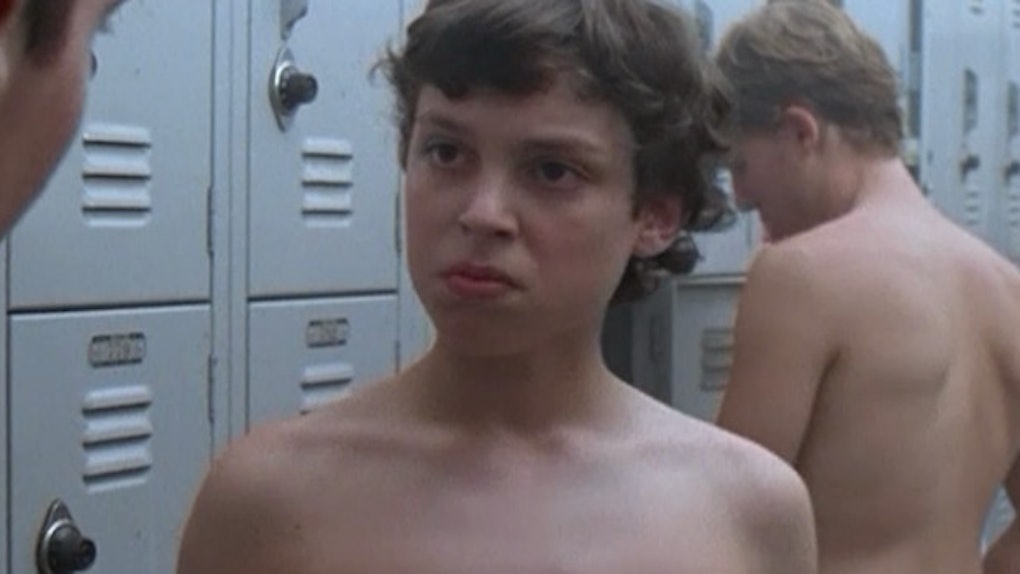 I hit puberty when I was approximately 15 years old.

If that doesn't sound that bad, think that less than a year ago, Kylie Jenner (who has now, I think, officially won the award for the most sexualized teenager in history) was 16.

Now imagine someone who looks remarkably like Macaulay Culkin in "Home Alone II" (I was like 105 pounds, had the voice of Minnie Mouse and could count the number pubic hairs I had on two hands) dating her.

A 15-year-old and a 16-year-old can date each other, right? I mean, that's perfectly natural. But if we'd dated, people would've just assumed I was just an orphan child she'd found in the trash and decided to keep and train as a human selfie stick.

I can only speak for the struggles of a boy's unfashionably late pubescence — but I imagine, on the girl's side of the spectrum, adding yet another body-variable for them to miserably contend with (you know, alongside all the classics such as “am I too fat?” and “oh, society will think I'm dog sh*t if I don't look like Kate Moss' prettier cousin.”) is about as pleasurable as pooping a porcupine.

So, with that disclaimer out of the way, let's proceed to my boyhood struggle with late-onset puberty.

Basically, it was garbage.

1. I certainly did NOT put the "pube" in puberty.

Pubic hair is like a frappuccino: You THINK you really want it, but once you actually get one, you're just disgusted.

I think I probably started growing pubic hair at like 13 or something, but when I use the word "growing" I mean it in the way Republicans do when discussing how trickle-down economics will make the economy "grow." I had Reaganomics pubes, guys. It was not looking good.

Meanwhile, when I occasionally glimpsed another dude my age's genitalia (in the locker room or something), he was standing there with a hydrangea bush sprouting from his crotch.

Obviously, I did my post-sports showering at home.

Thankfully, there were absolutely no girls checking out my situation down there before 16, but the same wasn't true for a college friend of mine, who was similarly puberty-challenged, except he couldn't grow any body hair at all until he was 16.

He told me about how one time at 15 he got a hand job in a movie theater (yeah, people actually do that), and when she put her hand down his pants, she felt around for a second and said, "Wait, you shave?."

This same friend was also on the swim team in high school and used the same excuse when people asked where all his armpit hair had gone -- he claimed that he shaved it off because it "makes me more aerodynamic, bro."

Although I had some body hair, God must have been distracted by a hot angel or something when he was programing its production because in the early stages of my manhood, that sh*t was weird AF.

For example, for a while I only had armpit hair under one arm. What the f*ck was up with that, God? That's some seriously weird sh*t to make a person deal with, buddy.

After that, guess what? Nipple hair. Yes, I was a 15-year-old kid who looked 11 and had one hairy armpit and two hairy nipples. Who knows why? I guess my ancestors had really cold nipples or something.

Needless to say, I didn't take my shirt off unless it was absolutely necessary.

2. All the sports you used to be awesome at, you're suddenly too small to play.

When I was a kid, I was super into playing hockey and soccer. Those were my sports. Unfortunately, around 13, everyone started turning into men while I stayed exactly the same. Imagine David trying to play soccer with 21 Goliaths and you'll get a clear picture of my experience.

Thankfully, in hockey I was a goalie, which meant I had a slightly longer lifespan in the sport.

My dad is a proud Canadian so an unhealthy obsession with hockey is apparently in my DNA, along with an affinity for maple syrup and apologizing.

Even though I was approximately a quarter of the size of the goal, I made varsity and started. But don't worry, there were still plenty humiliations in store for me.

Here's the worst one of all: I was too small to carry my hockey bag.

A goalie's hockey bag is the biggest of the whole team's and weighed about as much as I did, so carrying it on and off the bus, no matter how hard I tried, was literally impossible for me. This did to my manhood what George W. Bush did to our economy (Blamo! second fiscal anti-Republican joke!).

To make everything worse, the dude who decided to help me with the bag did so only to humiliate me and was, I think it's safe to say, pretty much the worst person on the planet.

He was my enemy. I shouldn't use his name, so let's just call him Darth Vader.

Darth Vader was huge and fat and cruel and used his huge, fat, cruel body to have sex with a girl I had a big crush on at that point -- which taught me an important lesson: Apparently, most girls prefer dudes who look like monsters to dudes who look like babies (so I have a beard now).

Darth Vader was basically just an unsuccessful bully who eventually left me alone for some reason, although he used to tragically make this younger kid do the "truffle shuffle" on the bus on the way to games.

If you are too young to know what the "truffle shuffle" is, congratulations, you will probably die later than I will, and you will die without knowing what shame looks like.

In the end, I quit playing hockey in 10th grade. But don't be sad.

When I finally did hit puberty, I pretty much ended up with Michael Cera's exact body, so it's likely a good thing I ducked out of the whole sports thing early.

3. Girls whose boobies you can't stop staring at keep calling you “cute.”

You will probably not be surprised I had very few romantic success stories before I hit puberty. I spent much of my middle and high school years just falling in and out of love with girls in tube tops.

Now, a 12- to 15-year-old boy has, coiled up inside him, the sexual angst of a thousand dying suns.

I'm serious, 12- to 15-year-old boys are pretty much just sex addicts who have never had sex. And the sight of even moderately above-average breasts is to the 14-year-old boy what the sight of land was to Titanic survivors.

Let me tell you, it's pretty demoralizing trying to flirt with a girl you are in love with when she is a foot taller than you and keeps calling you "cute."

Also let me remind you that beastiality is illegal in this country.

Thanks a lot, Obama.

Perhaps the most obvious reminder for people that you have not yet hit puberty (apart from the fact that you look like you are Peter Pan) is your voice.

I had kind of forgotten how high my voice was until I watched a video that I made with a friend of mine.

If someone just found this video and watched it without context, that person would think my friend was doing a WHOLE lot of molesting.

Having a super high voice for too long is only cool if you are Justin Bieber. If you are anyone but Justin Bieber, it makes you feel as lucky as the guy on the lifeboat who draws the straw that means he has to let everyone else eat his leg.

People also called me gay a lot around this time, for some reason. It seems that according to teenagers, not hitting puberty is gay. Which would mean all kids are gay?

5. Any social standing you had suddenly turns to garbage sh*t.

When everyone was the same size, I was pretty cool. I could, like, beat people at sports and girls thought I was cute in the good way.

But then, like I said, everyone suddenly started getting grown-up bodies except me and I took a swan dive off the social ladder into a pretty serious anime obsession.

You know how in "The Lord of the Rings," everyone is always treating Hobbits like they are just silly toddlers, even though they're fully-grown adults? Yeah, that's what life suddenly was like for me.

And although I did eventually develop Michael Cera's majestic stature and musculature, I think I internalized that Hobbit mentality a bit.

People who hit puberty really late continue to think of themselves as underdogs long after the struggle has ended.

You could have ended up with Dwayne "The Scorpion King" Johnson's body and you'd still think of yourself as Danny DeVito in the LA Laker's locker room muttering "one day you'll all see!" in his head over and over.

This state of mind is about as healthy as eating toothpaste to make your farts smell better, but it's pretty much what I'm stuck with at this point.

You learn to live with it. Also, underdogs are the best kind of dogs. That is, apart from pugs, obviously.

If there is any advice I can give any of my brothers in arms out there, it's two things.

First of all, read "Harry Potter" because that sh*t is liquid hot transcendence and will get you through the tough times.

And second of all, just tell all the haters you're more aerodynamic than they are.