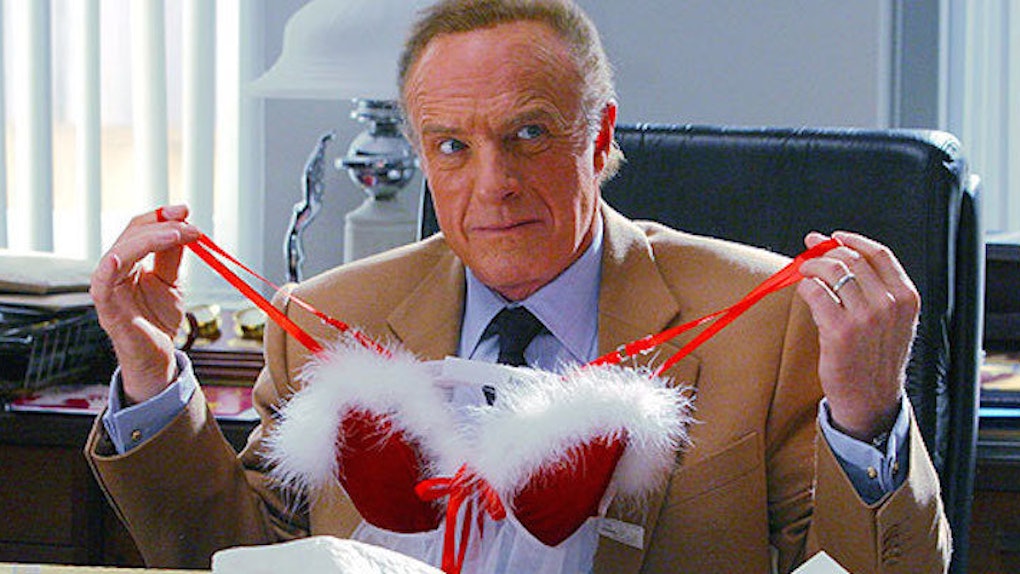 With Christmas and Hanukkah right around the corner, people are flocking to the internet to share the worst holiday gifts they've ever received, and the results are hysterical.

They always say it's the thought that counts, but that's only true until you get a gift so thoughtless you couldn't re-gift it if you tried.

So, if you're headed home for the holidays to a family who got you a breadbasket after you found out you had celiac disease, know you're not alone.

The sad world of the internet will always have your back.

Peanut M&Ms dispenser. My own Mother forgot about my nut allergy that year.

That's almost as bad as a mom giving her kid a pack of cigarettes for Christmas. Oh, what's that? That's happened?

Keep in mind that in the old days, people didn't know how bad smoking was for you. Tobacco companies knew but they lied about it. The year I was 13 my mom had caught me smoking a few times, rather than fight it, she gave in. For Christmas that year I got a smokers starter kit. A small custom box contained 10 cigarettes, there was a book of matches and a foil ash tray. It's something I wouldn't give to my kids.

Then, there's the opposite end of the parental gifts spectrum.

Weight watchers books and a self help book. I was eleven.

Speaking of food, this lucky guy got a special culinary gift.

A bottle of bbq sauce. I have no outward affection for bbq sauce or even mentioned that I like it. It was [as] if they forgot it was Christmas and just grabbed something from the pantry.

And same with this person...

I was once given a rotisserie chicken, no utensils, and told it was the only food i was getting that day. Eating a whole chicken with just your hands is an odd way to celebrate christmas.

I gor a rotten watermelon with an n'sync cd inside at a church christmas party....

This takes creepy to a new level.

when i was in high school my boyfriends family gave me a mrs clause tree literally terrifying and they were all laughing the whole time and it was wrapped in newspaper and i did not know what to do. to be clear this was a small fake tree with a womans head and branch arms with human hands

Probably a box of my grandmother's ashes wrapped to look like a gift. My mother did this.

I guess every kiss doesn't begin with K...

Well, one time I was dating this guy I super was NOT into and he got me all this fugly jewelry from Kay...like must have dropped a $1000 on these poop colored 'chocolate diamond' earrings and matching necklace. I regfited him a copy of a Hemingway book and didn't even pretend to like the jewelry ...or him.

An engagement ring. Things had been heading south in our relationship a while but I still flew to his hometown with him for Christmas. During the trip I decided I just wasn't happy anymore and would end it after the holidays were over. On Christmas morning, in front of his entire family, I unwrapped the engagement ring and he proposed. Most uncomfortable moment ever.

A roll of toilet paper and Friday the 13th part 2. On VHS. I have no idea what the guy I was casually dating was getting at.

Who says you're too old for dolls?

I honestly would have rather received nothing.

So my pseudo Aunt (mom's college friend) gave me and my sister a gift a couple years ago. So she also had two grand kids and I think she may have either (a) forgot to get us something and just gave us weird grand kid gifts or (b) gave us the wrong gift. But she gave us this tiny little box that's like the size of a pack of cigarettes. Light blue with a little bear on it. A little child's box for them to keep their stuff in. And inside was a tiny little baby. The size of a thumb tack. A BABY.

Few years ago, I hot nothing. My family did not realized no one bought anything for me until all present were open and allwraping trash was being collected

Still, there's nothing quite as bad as this poor girl, who I hope hasn't gone home for Christmas since this happened.

My mom got me size zero jeans. I'm a size six. When I looked at her, confused, she smugly said 'Oh, I know you're not that thin, but these are something to work towards!' Also, my mother is a cunt.

I'd honestly rather have my mom yell, "Merry Christmas!" in my ear and throw me into traffic.

So, keep these holiday nightmares in mind when you travel to your parents' home this Christmas season, and be grateful you aren't getting a bunch of gifts that will kill you and your self-esteem.

Also, if you are getting gifts like this, what are you doing going back there?

Do what your parents would have done, and TURN THAT CAR AROUND.