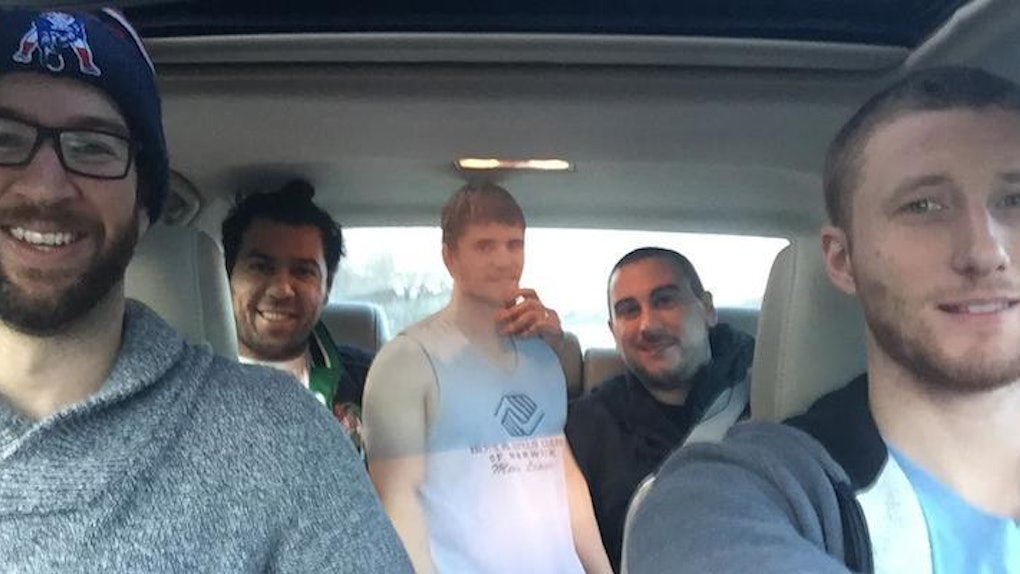 Kevin's friends were going on a cool, guys-only (!) birthday road trip that they were all, like, SO STOKED and SO PUMPED about, but then Kevin said he couldn't go.

Seeing as Kevin is that one friend who makes the group cohere and makes everyone feel comfortable around each other, his friends really hated this news.

When they asked Kevin, "WHY CAN'T YOU F*CKING COME? PLEASE! PLEASE WE NEED YOU," Kevin responded by saying his fiancee wouldn't let him.

Yes, ladies and gentleman, every movie ever made about bros being bros was right: Girls are GROSS, and they ruin EVERYTHING -- for example, THE BEATLES!

Clearly, I'm kidding. But in this one instance, Kevin's fiancee sounds like a real buzzkill. (PS. Yoko Ono is actually very underrated.)

Anyway, unable to hang out together without at least a depiction of their dear friend Kevin, these dudes got a cardboard cutout of Kevin wearing a tank top and brought him along.

And the results are -- despite all the sarcasm goo I've coated this article with -- pretty amazing.

The guys jumped into the car, where Kevin didn't wear a seatbelt, because Kevin isn't afraid of anything.

Kevin is a savage. One time, Kevin punched an MMA fighter because he didn't like the fighter's singing voice. That's a FACT. (It's not a fact; don't sue me, Kevin.)

Then, they played some soccer because Kevin, even though he is really tiny, is unmatched in his footwork.

One time, Kevin nutmeg'd Cristiano Ronaldo, and Ronaldo farted in rage, but Kevin didn't tell anyone because Kevin is a good guy. That's a FACT.

When Kevin got dirty, his friends did what all bros would do and gave him a shower.

One time in college, Kevin spent a month only bathing in hot tubs with models (models of Autobots from "Transformers," to be specific. God, Kevin loves that Shia LaBeouf). That's a FACT.

Then, when Kevin was clean, they brought him to the CLUB, where Kevin crowd surfed.

One time, Kevin got on stage at a Rolling Stones concert and just started grilling up some veggie burgers. It was f*cking crazy.

And because you can't just party all the time without taking care of Kevin's famous body, the friends hit the gym.

One time, Kevin deadlifted a car filled with 1,000 jars of Nutella. That's a FACT. HE DID THAT. That is REAL (not real).

WHEN KEVIN WAS RIPPED AGAIN, THEY WENT BACK TO THE CLUB, AND HE MET TONS OF CHICKS.

One time in college, Kevin got caught porking the dean of the school while the entire cheerleading squad videotaped it for future reference in private. THAT HAPPENED.

AND, KEVIN GOT LUCKY!!! Of course he did. Kevin always gets lucky. I love you, Kevin. God, I love you so much.

Maybe Kevin's fiancee was right. If I had a Kevin, I would never let it out of my sights.