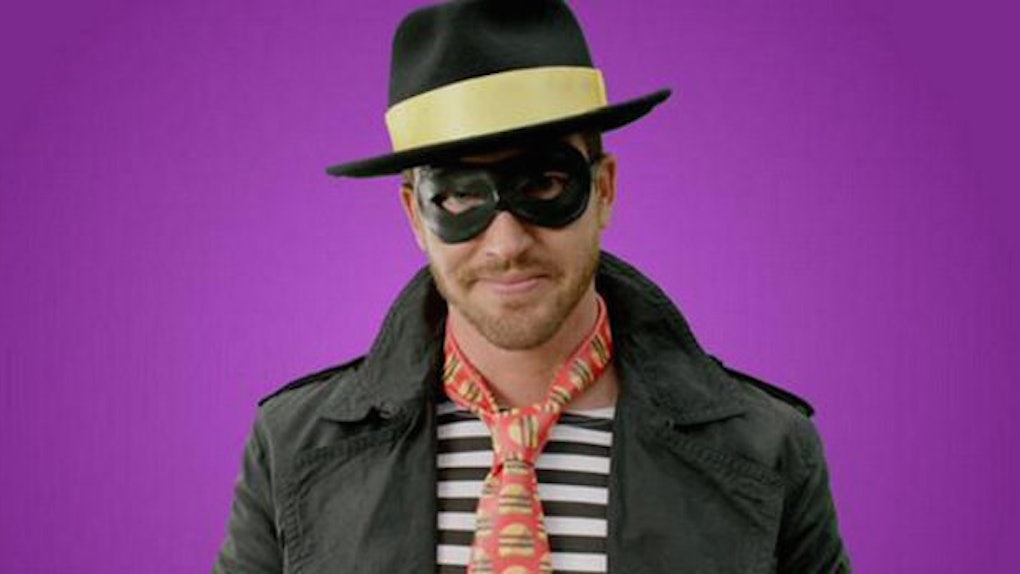 The Hamburglar used to be one of McDonald's weird, kid-oriented mascots, and he retired 13 years ago for reasons that were never really made clear.

There's no way the face under that mask isn't covered in boils.

However, it seems a lot of people loved that little weirdo because McDonald's decided to bring him back with a brand new look.

We felt it was time to debut a new look for the Hamburglar after he's been out of the public eye all these years. He's had some time to grow up a bit and has been busy raising a family in the suburbs and his look has evolved over time.

Yeah, someone had sex with that creature and birthed a hell child.

McDonald's teased the new look with a series of unsettling videos.

The Legend. The Lore. The good looks? Hamburglar is back, America, and he's after our Sirloin Third Pound Burgers! https://t.co/M2Zi2OXo4u — McDonald's (@McDonalds) May 7, 2015

Apparently, the Hamburglar is a serial killer? Pretty sure only serial killers have secret rooms with their notoriety plastered all over the walls...

Then came the official photographs.

I introduce to you the Hamburglar.

Honestly, I don't remember the old Hamburglar at all, but apparently, he was A BIG DEAL.

The people of the Internet remembered him, though. Within minutes, they were devouring his corpse.

Not into this new Hamburglar pic.twitter.com/9JpDz2d2Kt — Bill Corbett (@BillCorbett) May 6, 2015

Either they were making fun of him...

Pretty sure new Hamburglar is actually 1990s WWF wrestler the Repo Man. @sundownmotel back me up here. pic.twitter.com/Wy0T7AUSGd — Chris Welch (@chriswelch) May 6, 2015

It's super obvious that Superman is Clark Kent, but it's even more obvious that The Hamburglar is Macklemore. pic.twitter.com/Vi23so5mLF — Joseph Scrimshaw (@JosephScrimshaw) May 6, 2015

...or thought he was weirdly sexy.

I would let the Hamburglar put a dirty hamburger inside me. — molls (@MollySneed) May 7, 2015

So there's a lot going on in the world, but we have to talk about the new hamburglar cuz he's pretty hot http://t.co/aIbTcfJxqR — Ayan Chatterjee (@goayango) May 6, 2015

Uhhhhhh....you guys? I think I might have a crush on the new Hamburglar. http://t.co/JmKOFqgJQm pic.twitter.com/RYSbjtt9qn — jamie clare bell (@jamieclarebell) May 6, 2015

You know, in the way all hamburger-obsessed people are...

The thing about the new Hamburglar is that he doesn't look like he's ever eaten at McDonalds. — Cristela Alonzo (@cristela9) May 7, 2015

Because who DOESN'T want to pork a masked thief wearing red latex gloves?

Others pointed out he's basically just a hipster Zorro.

THE NEW HAMBURGLAR SHOULD NOT LOOK LIKE HE IRONICALLY ENJOYS HAMBURGERS pic.twitter.com/okkLbvHBZy — Brian Gaar (@briangaar) May 6, 2015

The Hamburglar was delivering weed for a dispensary in West LA before he was discovered 3 hours ago. pic.twitter.com/dDYkp66aXD — Newton Stern (@newtonstern) May 6, 2015

So what are you waiting for, dummies? Go get in on the Twitter action!

thought of a really funny Hamburglar tweet but now realize it'll work much better as a suicide note — Matt Oswalt (@Puddinstrip) May 6, 2015

Here's a sample Hamburglar tweet to get you started.

I'd let the new hamburglar something something food/sex pun — hashtag hannah (@hahanuhuhh) May 6, 2015