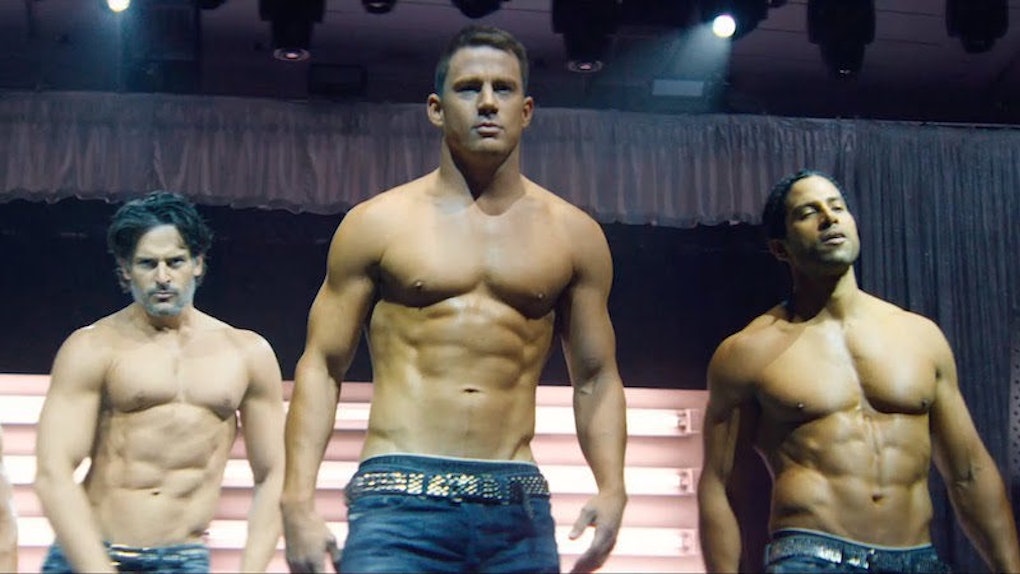 Today, many of the women who spent their Valentine's Day in a movie theater, hoping to catch a glimpse of Jamie Dornan's butt, will do the same thing with the cast of the newest "Magic Mike" movie (likely causing others to miss important plot points thanks to their involuntary hooting and hollering).

Those women will probably be joined by at least a few who left their boyfriend alone for the night so he knows what she feels like whenever he's invited to a bachelor party.

If you're one of those lucky guys, you're going to want to find a way to distract yourself for a few hours.

1. Construct a dummy of Channing Tatum using a potato sack and straw and burn it in effigy.

2. Google "Does anyone hang dong in the new 'Magic Mike' movie?"

3. Think about literally nothing for 20 minutes without having to scramble for fake answers when your girlfriend asks what you're thinking about.

5. Stand in front of a mirror and try to master a choreographed dance your girlfriend won't be able to resist (like "The Soulja Boy").

6. Watch the Chris Farley "Chippendales" sketch on repeat until she gets back.

7. Decide if the giant muscles you can get from steroids are also worth the tiny testicles.

8. See if you can wax your chest without ripping off a nipple in the process.

9. Curl into a ball on the floor of your shower until the hot water goes away.

10. Eat a steak without cooking it first.

11. Browse the titles of the movies playing on the adult channels on your cable box and use your imagination.

12. Practice your Matthew McConaughey impression (You know you have one. Everybody does. He's the new Christopher Walken.).

16. Try to learn a card trick to make up for your lack of proficiency in sexual magic.

18. Remember the time you reported your credit card stolen because you couldn't control yourself at a strip club.

20. See if your penis is the same length as the last time you measured it.

22. Purchase a ticket to the same showing and find a seat where you can watch your girlfriend the entire time. This is easily the best strategy if you want to make sure "Magic Mike" will end your relationship, because nobody should date anybody who does that.