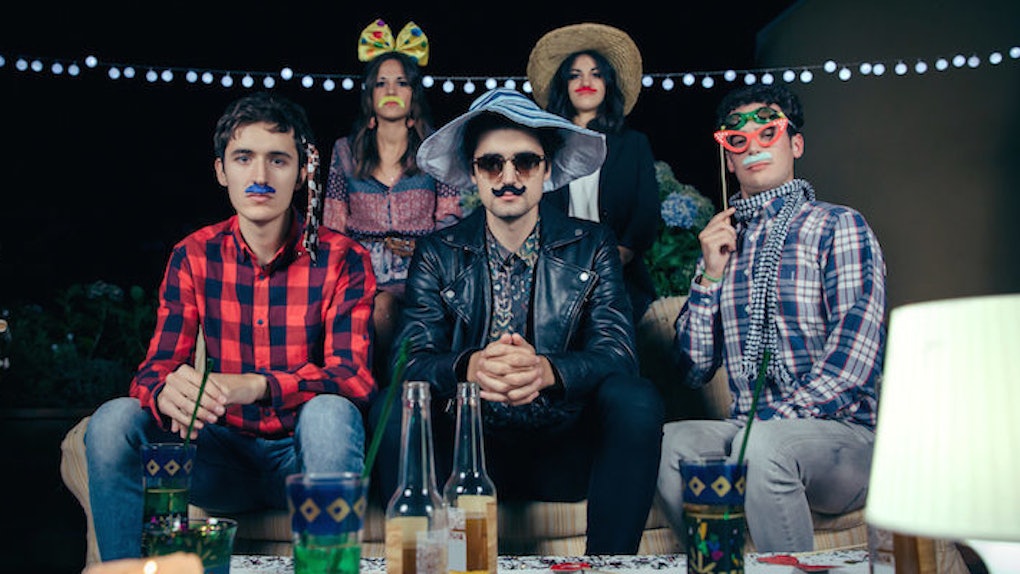 5 Impractical Aspects Of Popular Halloween Costumes That Ruin A Party

Picking out a Halloween costume is what I imagine it's like to pick out a dress for senior prom: You get stressed out trying to pick the perfect option and hope you don't have to fight anyone who shows up wearing the same thing.

There are a lot of factors you want to take into account when figuring out what to wear. You want to be original, show off your creative side and avoid any elements that can be interpreted as racist or bigoted.

However, unlike the girl who spent $200 on a skintight leather jumpsuit for her "cat" costume, there's one aspect of costume planning that rarely receives the attention it desperately deserves: practicality.

A lot of people spend so much time thinking about how everyone will react when they walk through the door at a party they tend to forget about planning for the rest of night.

If you're planning on incorporating any of these elements into your costume, you might want to consider if it's worth the trade-offs.

Popular with: people who look forward to the one time a year they don't have to show their face at a party.

Masks are a great option if you want to make yourself look like a generic monster or trending celebrity without having to do any work besides swiping a debit card, but they also come with their fair share of drawbacks.

If you're planning on drinking, eating, not sweating heavily, breathing enough air to stay conscious or having a conversation without the other person constantly saying, "huh?," a mask might not be your best bet.

However, if you're a fan of drinking beer out of a straw through a slit you cut into the mouth (like one of my roommates did to his Mitt Romney mask), there really isn't a better option.

Popular with: people who run makeup blogs on Tumblr.

If you have a steady hand and the necessary knowledge, face paint and other makeup can transform you into an entirely unrecognizable person with all sorts of horrifying gashes and dermatological issues.

If you don't, you should probably just avoid it entirely unless your costume is "second grader who got your face painted by a carnival worker who was still drunk from the night before."

Even if you managed to make your face resemble something besides "Bob Ross' palette," a crowded party isn't exactly the ideal setting to showcase your work -- it's only a matter of time before you unconsciously wipe the sweat from your face and ruin everything forever.

Popular with: people who refuse to accept "True Blood" and "Twilight" stopped being part of the cultural conversation a long time ago.

Vampire teeth shouldn't really be an issue anymore because it's 2015 and vampires have become about as overplayed as zombies. There's just no excuse to dress like one anymore.

One of the only exceptions is if you're planning to go out as a vampire chef named "Count Spatula," which just so happens to be my costume this year.

One of the only other ones is if you're the kind of person who goes to a party and thinks: How can I make people think I'm drunker than I actually am? All you have to do is pop in some vampire teeth and let the slurring/drooling begin!

Also, I know some (admittedly strange) people would argue vampire teeth can take your lip-biting game to the next level if you somehow manage to seduce someone with your costume,

I would respond by saying I think there are commonly accepted boundaries that are crossed with the introduction of sharpened canines.

Popular with: people who don't actually possess the angelic qualities their costume might suggest and girls who are looking for guys with a Tinker Bell fetish.

One of my favorite parts of college was walking around campus during Halloween weekend and finding at least one pair of glittered wings covered in dirt and trampled into the ground.

I'm sure there's been at least one pair that's managed to make it through an entire night, just like I'm sure someone out there has ordered Chinese food past 3 am and not regretted it the next day.

Anything is possible, at least in theory.

It's also worth mentioning wearing wings to a Halloween party is the equivalent of wearing your backpack on the subway. If you don't regret wearing them, you can be sure everyone else will regret that you did.

Unless Victoria's Secret pays you to model for them, it's probably best skipping out on the wings altogether.

All of the other entries have focused largely on how accessories can make the night more unenjoyable for you. This one is a little bit different.

For the uninitiated, pun costumes are a favorite among people who waited until there were no good costumes left to go shopping and turned to the Internet to find a low-effort outfit they could use to make people think they're clever.

I'd rather get hit in the face with a fairy wing every time I turned my head than have to act amused because someone stuck a knife into a box of Frosted Flakes and called themselves a "cereal killer."