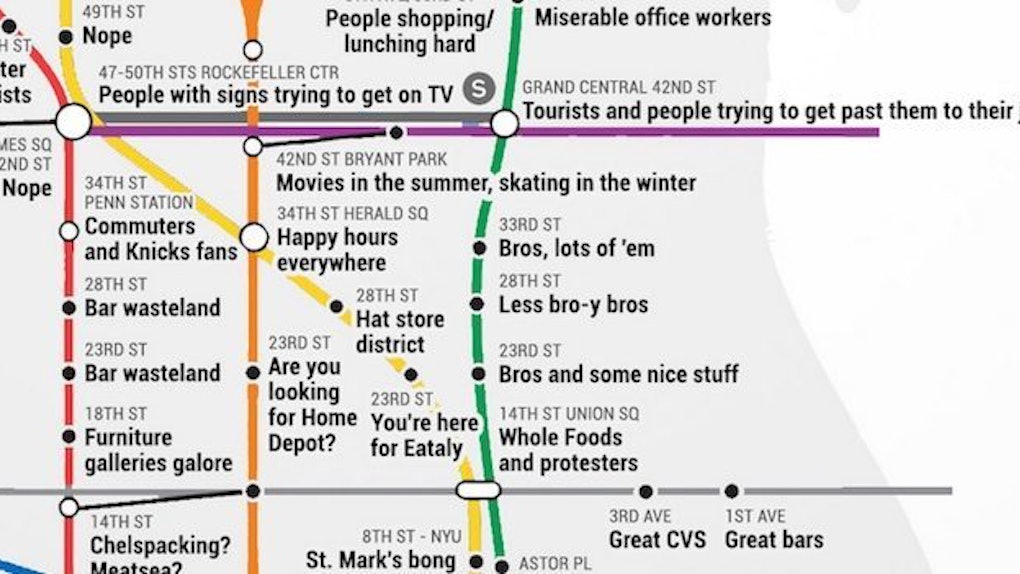 On days when people judge you more for drinking before 5 pm (also known as "weekdays"), the population of Manhattan essentially doubles as commuters who like having money for things besides rent flock to the city from bordering boroughs and states.

Most of these people will hop on the subway at some point during their travels because most people are willing to subject themselves to terrible music and the occasional grope to avoid walking 90 blocks to their office.

If you're unlucky enough to ride the subway enough, you'll also likely start associating different thing with different stops -- like "The Violinist Playing Christmas Music In March" (Union Square) or "The One With The Rats" (all of them).

You'll also probably find yourself using the subway like a reference similar to what you do with streets or landmarks, and Thrillist took the time to map out what you can expect to find once you leave the many stations on the island.

You can view the full version here, but I went ahead and broke it down for people too lazy to click that.

Someone told me they went to The Cloisters once, but I'm still not entirely convinced it exists.

The label for all of the unmarked stops should be "Places You Probably Don't Want To Go."

The Upper West Side summarized in four words: "People who wear vests."

The Upper East Side is a beautiful place if you're only talking about the part with all the rich people.

Have a little more hope (but not that much).

This is a great area to visit if you want to realize how cool you'll never be.