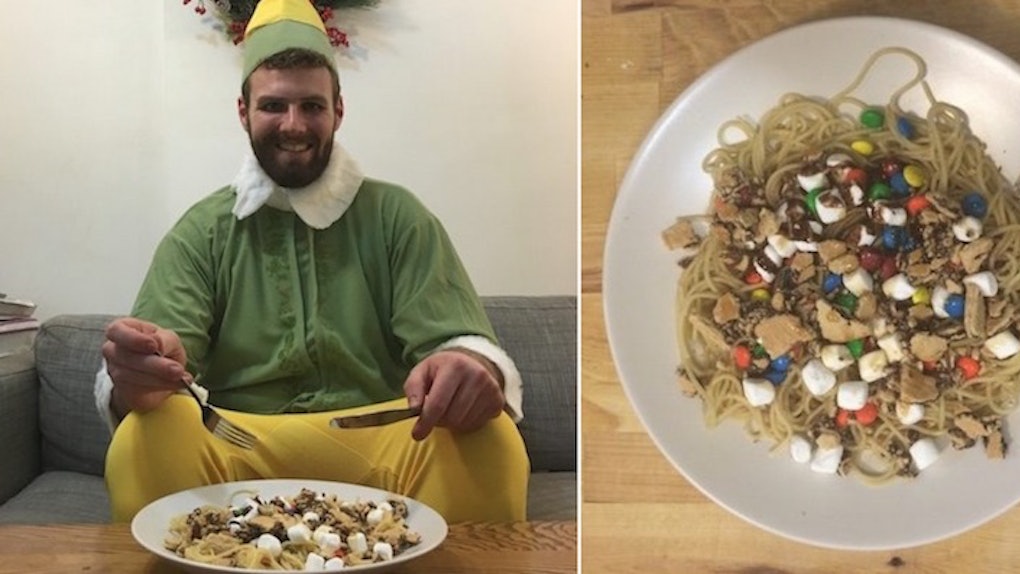 In the first week of November 2003, classic Christmas movies around the world felt a great disturbance after the debut of two new holiday films cemented the advent of a new era of holiday movies.

The first was "Love Actually," a charmingly British film with a series of emotionally-fueled, intertwining storylines that has continued to inspire pathetic pieces of fan fiction to this day.

The second was "Elf," the tale of a North Pole employee who grew up thinking he had issues with his pituitary gland before setting off on an epic journey to New York City to find his dad after discovering why he'd never fit in.

It's a movie that continues to inspire that one person you work with to constantly recite lines from the film during the entire month of December.

One of the more popular quotes involves the elf food groups -- candy, candy canes, candy corns and syrup -- two of which Buddy incorporates into a breakfast that's only slightly less balanced than a bowl of Cookie Crisp.

Every time I see that scene, I ask myself the same question: There's no way that can taste good, can it?

This year, I decided to finally find out.

I've always sympathized with Buddy a bit -- I wasn't orphaned as a child and have never worked for Santa Claus, but we're both defined by our abnormal heights and I know a thing or two about getting stared at while walking around New York.

I figured I might as well put myself in his shoes (well, I guess they were tights if we're being technical).

After closely examining the scene from "Elf," I managed to figure out most of the necessary ingredients.

They didn't have the last ingredient at the store I went to and I was forced to substitute it with a chocolate chip Pop-Tart. I wasn't happy, and I'm sure the recipe suffered because of it.

Cook the pasta by doing whatever the box tells you to do.

This is what pasta looks like when it cooks.

While the pasta is cooking, assemble the rest of your ingredients.

You want about a quarter cup of each dry ingredient (that amounts to approximately one-and-a-half crumbled Pop-Tarts), 2 tablespoons of the chocolate and caramel syrup and one tablespoon of maple syrup (less if it's expensive).

Drain the pasta, plate it and make everything look like one of those recipe videos you see on Facebook all of the time.

Evenly distribute the M&M's and marshmallows. Never stop smiling. Ever.

Drizzle the chocolate and caramel on top.

Create a Pop-Tart crumble by rubbing the pastry between your hands (use this GIF of Birdman for inspiration if you're having trouble visualizing).

Now spend one dollar for every second you spend drizzling maple syrup over the top. IMPORTANT: Make sure your belt finally breaks around this point.

Is it as delicious as it looks?

There's only one way to find out!

Here's a video of my first (and coincidentally, only) bite.

Thankfully I had the foresight to buy some syrup to wash things down with.

Based on the nutritional information, it's probably not the way you want to start your day.

But that's the least of my problems.