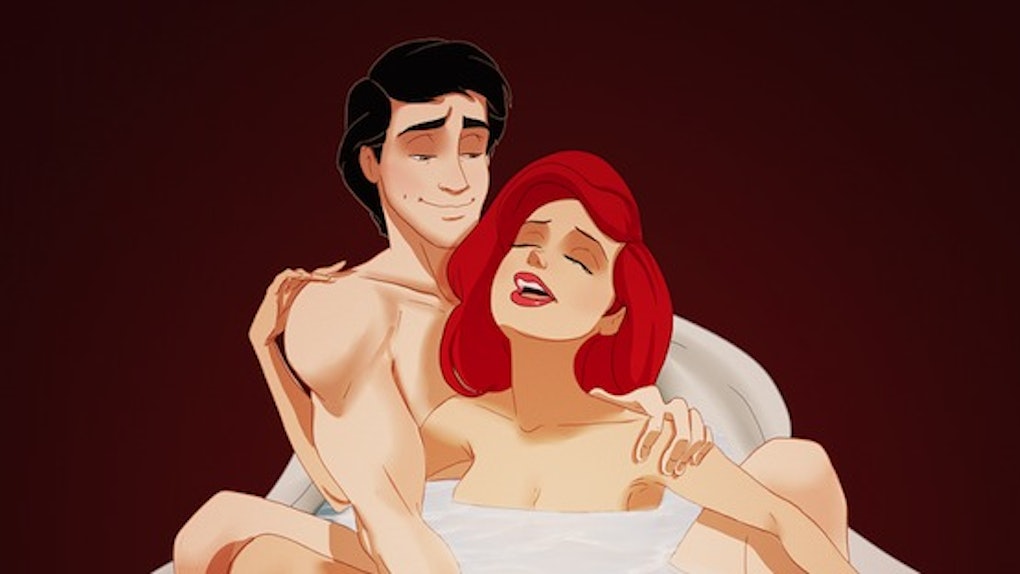 We all remember our first sexual encounter.

You can say Judy Blume was the initial catalyst of that stir in your panties, but if we're being honest, it was a lot less innocent than that.

If we're going to tell it exactly as it was, let's start with those first basic moments that got you wondering exactly why you really yearned to watch those Disney movies… because it had nothing to do with the princesses.

Maybe it was that bad boy complex of the Tramp that made you wonder exactly how far human sexuality went. Or maybe it was that hunk of a Chinese man in "Mulan" with his broad shoulders and perfectly executed man bun.

Or maybe it was Prince Phillip, with his tight calves, trim physique and hard sword (pun intended).Whoever it was, there was something in those Disney movies that was more mischievous than magical.

Whichever prince you yearned for in the throes of your 5-year-old passion says a lot about the men (or women) you look for now.

Whether it's wealth, strength, good looks or a hot temper, you're most likely attracted to the same male elements that made your Pampers moist back in 1999.

You're attracted to those guys who go above and beyond — easily whipped. You like to be chased and courted.

Your ideal type is a good guy with a good family and some money in the bank. He doesn't have a complex, however, and is willing to date below his “caste” if you're hot enough.

He also doesn't mind if you lose your sh*t every once in awhile. He's a nurturer who wants to take care of you and fix all your problems.

You want that bad boy from the streets with an incredible pad. The original hipster, chilling in a rent-controlled apartment with the best view of the city.

He's easy to please and can ride that “magic carpet” for hours. He's most likely not into clothes, or at least a shirt, and has the body to pull it off.

He has good morals, and even though he struggles sometimes, he always does the right thing. He's self-made — even if he's blessed with good luck.

That first ginger crush stayed with you throughout the rest of your life.

You didn't realize it then, but you just want a guy with a soft side, someone to harmonize and take picnics in the park with.

He's masculine but in tune with his feminine side. He also doesn't care if you're from the middle of the woods or a rich bitch -- he just wants you to get your rest.

You're into that perfectly manicured, hot Miami type. You love a guy with a boat (and hopefully, his own crew) and a taste for luxury.

You also like him to have a musical side — a guy who can play the flute and knows how to blow yours.

You're looking for man with a pad on the beach and a fetish for anything slippery and wet.

You're into assertive men with a bit of hair. You like to make him roar, even if he scares you at times. He has strength and a temper that turns you on.

He's aggressive and assertive. Not to mention he has a strong group of friends — even if they're also somewhat intimidated of him.

He has a brooding side, something that comes and goes along with his hot temper. But it's his mood swings that make him so alluring. Oh, and you know he's into flowers.

You're into those smoldering Abercrombie & Fitch model types. You like a man who can pull off a good ponytail and has the cheekbones of a god.

You're not intimidated if he's better looking than you, in fact, you like to show him off.

You're most likely looking for someone who has been through some sh*t and came out the other side -- a late bloomer, someone who didn't realize how good looking he was until later in life.

He was most likely an awkward monster in high school and is still unaware of how truly attractive he's become.

You're into those guys who will never settle down. The one you're forever chasing.

The one who will leave at a moment's notice to go travel through Asia.

You'll never be able to tame him and will forever try and follow him.

He's the kind of guy who will break your heart, invite you to Barcelona then come back with some Spanish beauty on his arm. He's charming, alluring and forever leading you on.

The original pioneer of the man bun. You're into ethnic types. He's not a hipster; he's just original.

He's the silent, stoic type who is fiercely loyal and always ready to defend your honor.

It's hard to break into his exterior, but once you do, he's a softie. He likes powerful women, however, and lets you defend yourself if need be. He's definitely a feminist.

You want a queen, not a prince. You're looking at a man who is clearly into the idea of the seven men living with you while you're fast asleep.

Sorry to say it, but you may be barking up the wrong tree.

You're into hunks. That's about it. You want a hot bod with a hot face and don't really give a damn about what's going on upstairs.

He's most likely blessed with some inheritance and a good name, so you don't need to count on him to hold a job down.

He likes being the man in charge, and you love playing the damsel in distress.