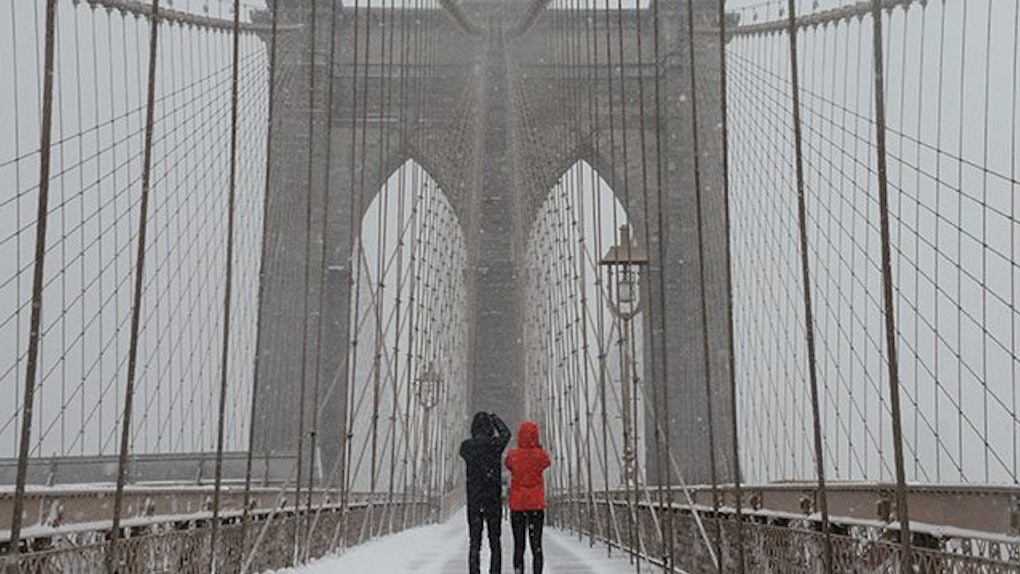 Differences Between Snow Days As A Kid And As An Adult

It's actually crazy when you think about how something we loved as kids transformed into such a depressing reality.

Ten years ago, any one of us would have happily welcomed Winter Storm Stella, the blizzard that's currently pounding the northeast.

That's just how it is when we were kids -- whether we're talking middle school, high school, or college.

Everyone looked for that extra day off from school, and embraced it with open arms.

Now that we're adults, we can all lament how different things are, all together now: THIS SNOW SUCKS.

A blizzard is literally one the worst things that can happen to you when you're a grown up.

In fact, it's actually sad just how much of a contrast there is between how you react to snow as an adult, and how you did just a few years back.

Back then, you literally prayed the max projection was true.

I don't care how broad the forecast was. If the weatherman said, "between four inches and two feet," I went straight to God asking for two feet like Bart Simpson.

School sucked THAT much. And don't even get me started on if a snowstorm conveniently landed right on a test day.

I'd break out all the rosaries in that case.

Now, you start questioning the credibility of forecasts.

A forecast of 12 to 20 inches is really, like, worse case scenario, right?

As soon as the news starts talking snow these days, I'm literally in denial until I actually SEE a storm happen.

Back then, you eagerly anticipated the call from school in the morning.

All it took was one snowflake for every telephone ring in the house to become a matter of super importance. This was no time to get calls from auntie.

You wanted to hear from one person, and one person only. That is, if your school district wasn't totally lame when it came to snow days.

Now, you don't even bother, because you know your office will be open.

More often or not, your boss ain't calling off work... unless you're a teacher, in which case, screw you.

For everyone else, there's actually money on the line, bruh.

You don't even bother thinking about the luxury of staying home, unless it's REAL bad, in which case the snow still sucks for you because...

Back then, you thought about playing in the snow.

The only math I did in my head when snow was coming was estimating how many precipitation was needed to be able to go swimming.

All I wanted to do is dive in it with no care in the world. The more snow, the better.

After all, you can't have a good snowball fight with just two inches, but a foot of snow? Yeah, that was lit.

Now, you're actually responsible for cleaning it.

The math is totally different now.

I'm thinking what the amount of snow actually equals in terms of hours it will actually take to clean up, because ain't nobody else going to do that for me.

Back then, you thought about where you'll put your snowman.

This was probably the hardest part of a snowstorm back in the day. Making a snowman is not easy, and you have to chose the right place to build it, too.

Now, you think about where you'll put your car.

This is seriously, hands down, literally the absolute WORST part about the snow.

There is significantly less room for parking on the street. How difficult it is to park when there are piles of snow taking up space near sidewalks is actually ungodly.

It's to the point where actually attempting to go somewhere is a risk, because when you get back, there's no telling how far from your place you'll have to park.

Back then, you looked forward to doing nothing with people you love.

Snowstorms in college? Now those were lit.

You didn't have to go to class and you could invite anyone over to your dorm to do nothing but chill (or Netflix and chill, depending on what type of friends we're talking about).

That's a significant upgrade from chilling with your brothers and sisters when you were younger... but even that was great, and definitely much better than alternative that come with being an adult.

Now, you're mad at how the snow gets in the middle of your social life.

Arguably the most important question to ask when snow hits as an adult is, can I still go out? Being in the house is all fun and games when, well, all your fun and games are at home.

So yeah, I was happy playing Xbox all day in 7th grade. Now? Yeah, not so much.

Back then, you literally didn't worry about food.

The only thing you worry about is whether or not you're actually going to take a bath that day.

Now, you're panicking to make a store run.

Snowstorms leave you sweating over what you're going to eat these days and whether you even have the ingredients at home to make it.

That's even if you cook (don't lie, I know some of you don't know how to).

At least the Chinese store's always open, though.

That's, like, the ONE good thing about snow days.