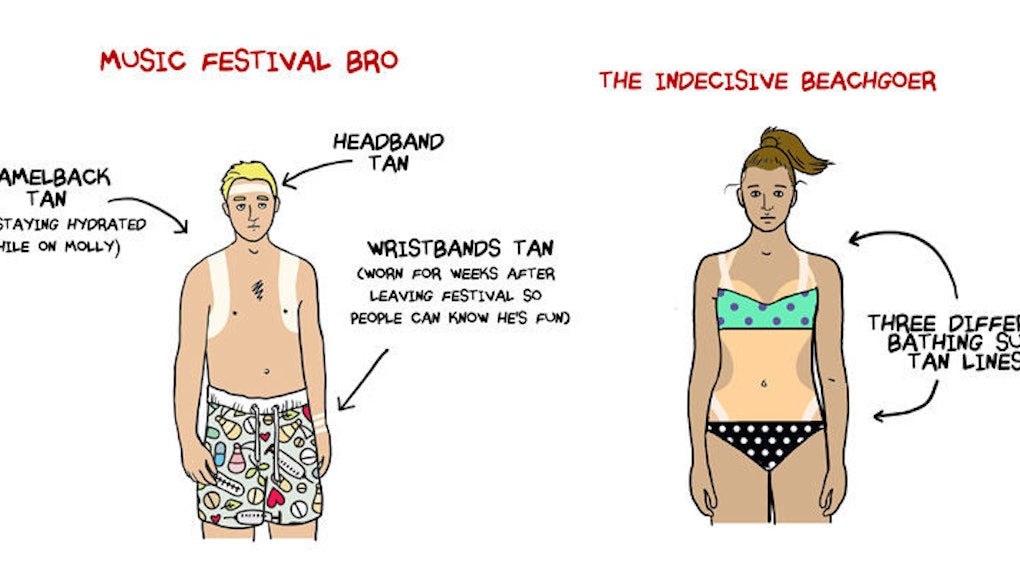 Your Current Tan Says Everything About How You Spent Your Summer

According to the calendar, we still have a few more weeks until summer is officially over; but for most people, Labor Day weekend marks the spiritual end of the season (and the beginning of one filled with cold, vitamin D deficiency, and slipping-on-ice concussions).

Some people will use this remaining time to scramble to do the things they said they'd SWEAR they'd do next weekend every single weekend this summer -- namely, something other than drinking their weight in beer and falling asleep in front of the A.C. with their hands covered in cream cheese.

I'm sure more than a few people will spend their weekend doing everything they can to maximize their tan before the sun is no longer strong enough to drastically increase their risk of contracting melanoma.

But at this point, there's really only so much you can do to make up for months of sun exposure.

By now, most people have already earned a fairly defined set of tan lines, and it's pretty easy to figure out how they spent their summer if you know what to look for.

On Facebook, he lists: "That Ill Beat Drop" as his religious views.

Sunscreen is for regular humans. This person needed to dig a hole in the ground and hide from the giant ball of fire in the sky.

She ended up looking like a piece of paper that is continuously re-drawn on.

Their happiness is predicated on the luck and talent of a group of grown adults who are really good at stuff we all did as children.

They had to bring a sweater to work because apparently Mr. Freeze was in charge of the thermostat.

Speaking of Mr. Freeze... here is how you spot a superhero at the end of summer.

It's a lot harder to spot a female superhero because they are made to fight crime in little more than their underwear.