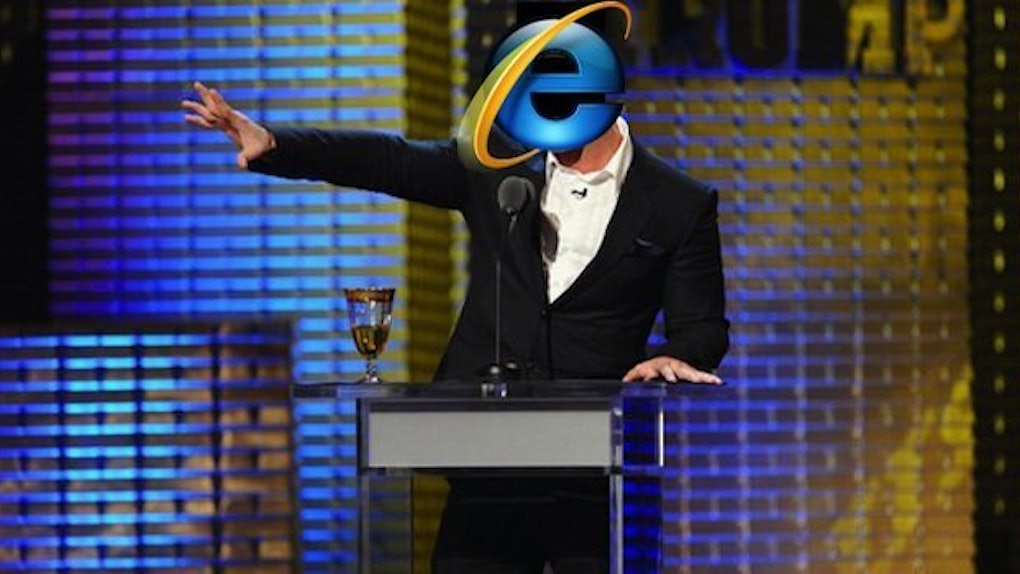 This Is What Other Browsers Roasting Internet Explorer Would Look Like

Microsoft recently announced the release of Windows 10 would mark the official death of Internet Explorer, the browser you used to navigate the Internet for far too many years because there were no other options.

We looked back to try to think of some happy memories and positive things to say about Internet Explorer, but then realized that was going to be hard to do considering none of those things exist.

Instead, we decided to arrange a roast for the retiring browser hosted by the ones that will still be around (and one very special guest who hasn't been for a while) to celebrate all the things we loved to hate about Internet Explorer.

A roast wouldn't be a roast without slightly forced jokes about celebrities.

Firefox crashed when I typed this one out. I assume it was trying to tell me something. Probably something like "Boooooo."

A subtle yet important differentiation to make.

My money's on the second one.

Basically the definition of "counterproductive."

Not everything about Internet Explorer was bad. Just most things.

The popups were definitely not in favor of abstinence-only education.

I wonder if it will try to get everyone to submit one last error report before retiring.

This is the only joke Opera made before leaving the stage. Opera has always been a little weird.

I don't even want to know what it was searching for.

This is a slightly different motto than "Fast is now beautiful."

I'm assuming this was the second choice.

Don't think too hard about this one.

You either get it or you don't.

Smallpox is basically the only virus Internet Explorer couldn't give you.

We're honored to announce the return of Netscape Navigator, who hadn't been seen in public in over a decade.

It was actually living in an alley outside of where the roast was filmed.

This really is quite the achievement.

At least you knew what you were getting yourself into.

This is one of those "weird but true" jokes that no good roast should be without.