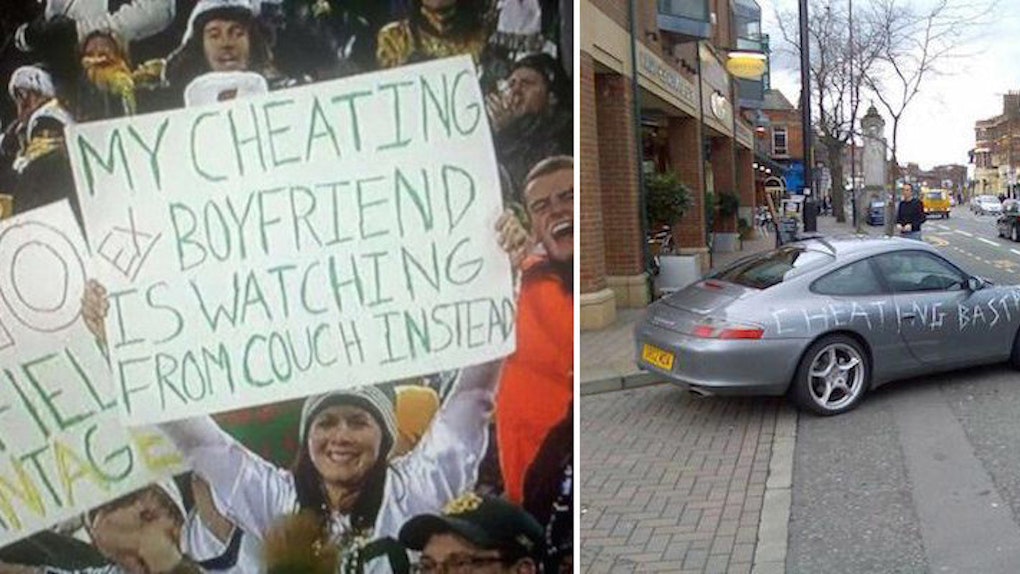 There's little else in this life that hurts as much as being cheated on. For those of you who haven't experienced it, imagine someone you are in love with suddenly locks you in a house with Robert Durst after telling him you "know his secret."

Hopefully that gave you a clearer idea.

Usually, friends and family will tell you it's important to move on and heal and all that reasonable and completely dickless advice, but sometimes you just want to feast on the deliciously sour taste of total vengeance.

Most of us don't have the courage for revenge, but there are certain Titans among us who do. Yes, these Titans will stop at nothing for payback.

Today, we honor them.

They love them more than George R.R. Martin loves killing his characters.

And they are ready to pay for them.

Or, at least, help pay for them. They are, after all, quite happy to let the target of their hatred assist in the investment.

Then there are what I call the "public service announcements," which are also very sign-oriented.

Pretty much the most politely devastating thing I've seen since a girl I was in love with in middle school asked me, "What's your name again?"

This is a "warm welcome" much in the way that the surface of the sun is technically "warm."

This one looks suspiciously like an ad for frozen yogurt, or something involving antioxidants.

This public service announcement is actually from a very considerate bro who taped this note to the bottom of the toilet seat so it'd only be seen when the boyfriend lifted it to pee.

From here, we move on to the more entrepreneurial vengeance seekers.

Like this lady, who sold her husband's clothes on eBay by modeling them half-naked, effectively leading a two-pronged attack on her ex's wardrobe and genitals.

And this lady, who hosted a huge garage sale that somehow made the news (apparently White Rock has as much news as I have self esteem: very little).

This guy sold his ex's TV on eBay with some of the most impressive vengeance-salesmen comedy writing I've ever seen. He should have my job.

But this lady takes the prize with this very professional sign. (Also, please note the website: greatfamilyhome.com.)

Then, of course, there are the "car mutilators." I like that this guy is just driving around in his Porsche anyway.

I feel like this is the wrong time to mention this, but it's "you're broke" not "your broke," Nikki.

No word yet as to whether or not "the pussy" was worth it.

The moral of this story: If you are going to cheat on your significant other, get a sh*ttier car.