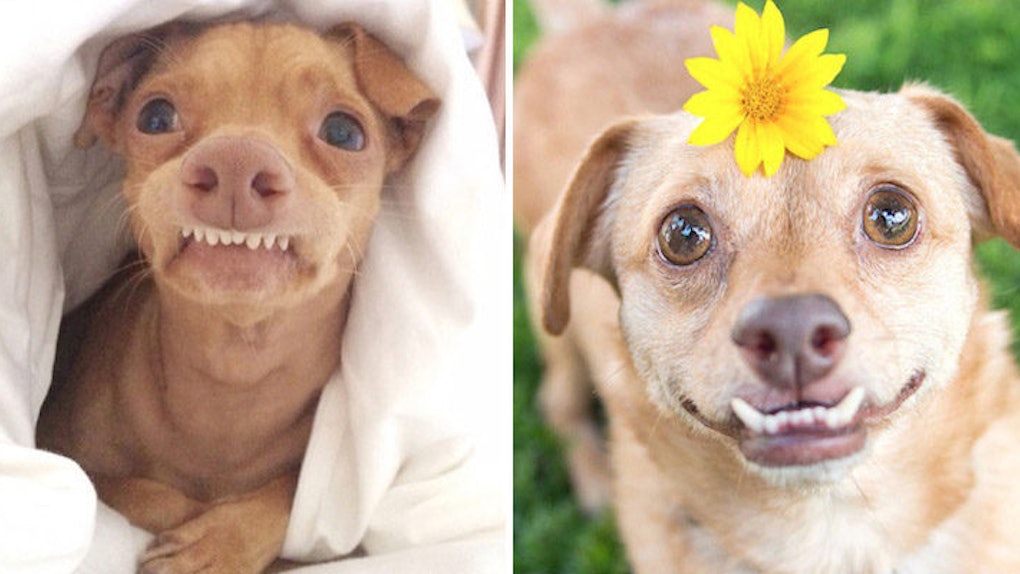 14 Animals That Definitely Could Have Used Braces Growing Up (Photos)

A lot of humans, at some point, are informed they need braces by an orthodontist who tells literally every single patient that regardless of the truth. However, most animals are free from this barbaric and expensive practice.

The reason Grumpy Cat and that dog with the broken tongue are so popular is that the Internet is obsessed with animals blessed with poor genetics. Why? Because they're cute as f*ck. It's not anything more complicated than that.

So, for your pleasure, I've scoured the Internet to find a bunch of animals that could definitely use braces (or could have, I don't know how many of these are actually still alive).

I've also taken the liberty of giving them all cool nicknames. I'd like you to imagine they are a gang of weird-toothed misfits, prowling across the city in a ruthless pack, peeing on baby strollers and starting fights with dentists.

The sinister pooch is being investigated for several high-profile insider peeing scandals.

An explosives expert. The only thing he likes more than laughing gas is watching the world burn.

No one knows exactly how Doctor Wink lost his eye, but rumor is that it was during a legendary bare-knuckled boxing match between the dog and Charlie Sheen. Sheen was never the same after losing.

The king of all cats, Jabba the Puss fraternizes with the most dastardly felines from across the galaxy. His only rule? "Money over everything."

Don't be tricked by his "chilled out" demeanor, Tommy 2High once mauled a mule to death after he caught it cheating at blackjack.

Keira Knightley was one of the stars of the "Pirates of the Caribbean" series and has been in a slew of successful films throughout her career. She is also this dog.

Screech got his name from the 90s television show "Saved By The Bell." Although, this tough Alpaca began to regret that nickname after the actor who played Screech stabbed that guy or whatever. He's trying to change his gang name to "2Paca," but it's just not catching on.

Kitty Bitter suffers from recurring acid flashbacks. You don't want to be alone in a room with her: You'll be in danger of either having your ear talked off about who was REALLY behind 9/11, or your ear just bitten off. Girl is crazy.

A chronic germaphobe and hoarder, Señor Fear rarely ventures outside. He's the brains of the operation, the computer guy, pulling the strings from behind the scenes.

When she bites you, you become her servant and dote on her for years, searching for her approval.

These three sisters LOOK friendly, but don't let that fool you. They can dismantle your self-esteem with razor-sharp wit faster than you can say "orthodontist scalp."

Filthy Steve's stench is matched only by his ruthlessness. I saw him take a dump in a dentist's Jaguar one time. He was laughing like crazy. Dude is gross.

The Milkman doesn't talk much. The other members of the gang love her, though, because she's always got the freshest milk in town and is like a walking refueling station. Chasing dentists is super hard work, people. If it were easy, everyone would do it.