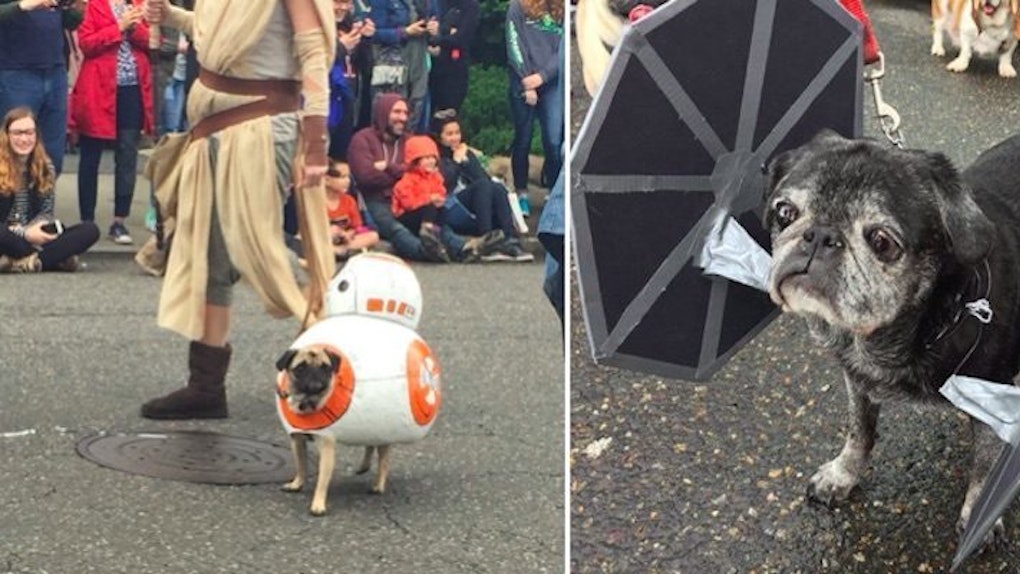 It's no secret dogs make everything in life better.

Remember when we showed you that epic beach bash for man's four-legged BFF a while back?

Well, if you thought that Corgi beach party was the best thing that ever happened to giant puppy playdates, you might want to brace yourself.

Apparently, there was just an adorable parade specifically for pugs in Portland, Oregon.

Pugs dressed up in "Star Wars" costumes, to be exact.

Yep, that's right. The crazy pug owners of Portland just made all of our wildest sci-fi dreams come true by having an epic "Star Wars"-themed pug parade.

As you can probably imagine, this dog event was downright delightful -- not to mention, absolutely hilarious.

From tail-wagging Wookies and spaceships to doggy Darth Vaders and four-legged Yodas, the annual Pug Crawl featured all sorts of adorable pups prancing around the streets in some cute AF canine costumes that were simply out of this world.

Despite the rainy weather, the Pug Crawl brought out lots of spectators who captured every precious moment of the parade from the sidelines.

In fact, one woman was nice enough to give the world a glimpse of this glorious dog parade by live-tweeting the whole "Star Wars" pug procession.

Check out the pictures below for a closer look at this hilarious pug parade.

Featuring pugs dressed up as all of your favorite "Star Wars" characters...

...and blessed the Internet with a blow by blow of what went down during the parade by live-tweeting the entire event.

Hall managed to capture a variety of dogs decked out in all sorts of hilarious canine costumes...

...to adorable DIY Cloud City costumes and everything in between.

Apparently, it was raining during the parade. But as you can see from Hall's tweets, no amount of precipitation could put a damper on the sheer enjoyment of seeing these "Star Wars" dogs.

I mean, seriously, just look at this pug dressed up as a Space Age lunchbox...

...and this prancing pug from "a galaxy far, far away."

The Force is definitely with this precious X-wing pup.

Last one! To that guy sitting on the curb behind the X-Wing pug: I know exactly how you feel pic.twitter.com/zn1Ef9lvG7 — Laura E. Hall (@lauraehall) May 23, 2016

While the parade may be over, Hall's tweets will make the memory of this adorable event live on forever.

The parade is over and all the pugs have waddled home. Thank you to the @OregonHumane Society for a truly great day https://t.co/vK3CehzXvy — Laura E. Hall (@lauraehall) May 23, 2016

It turns out, Hall wasn't the only one delighted by this dog-filled day.

Went to a Star Wars themed Pugcrawl today. Turns out, I didn't know what true happiness was prior to this afternoon: pic.twitter.com/gvlHxrIy4d — Mike Bennett (@MikeBennettArt) May 22, 2016

Yep, these cute AF canines gave a lot of people the feels...

...and I think it's safe to say this pug parade will probably go down as the most glorious dog event in hound history.