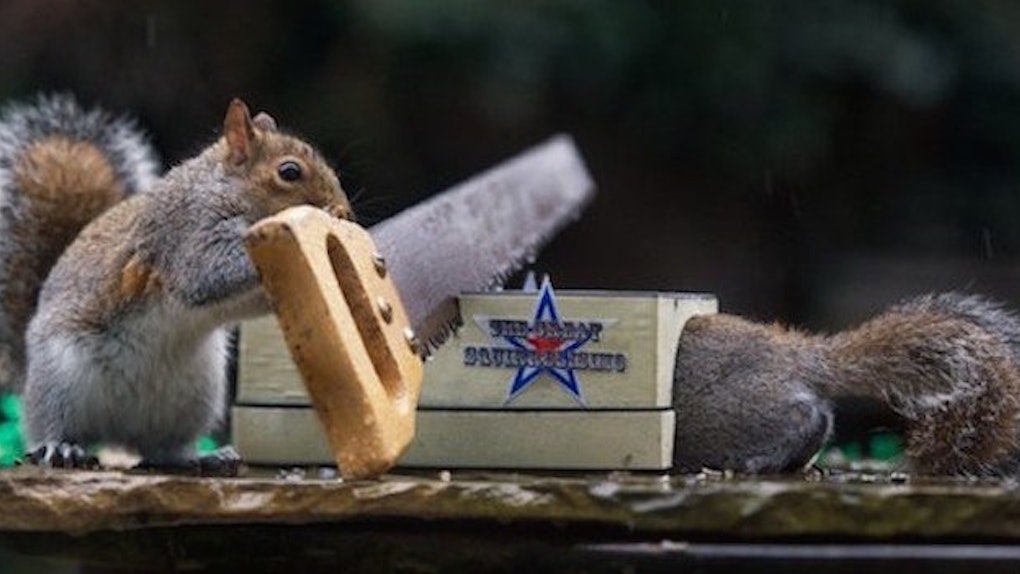 Someone Found A Way To Photograph Adorable Squirrels Lifting Weights

Believe it or not, summer is right around the corner -- and there's no need to panic.

If you've been contemplating a comeback into the healthy, fit lifestyle you once lived or you're interested in adapting to one for the first time, we found a unique photo series that might help you get there.

You know what they say, laughing and smiling both burn calories!

In a recent photography series composed by London-based photographer Max Ellis, we're taken on an obscurely adorable journey featuring the squirrels in his backyard.

Ellis, a bodybuilding photographer, discovered he has a bunch of friendly squirrels who frequent his backyard on a daily basis. That's when he had a genius idea to use props to make his squirrel friends become bodybuilders.

Throughout the series, titled "Squirrelisimo," Ellis uses clear thread to hang props. Then he waits for the perfect moment when the squirrels are interacting with the props and snaps the photo.

Check out the photos below for a closer look. And maybe take some notes from these furry friends!

How do you plan on getting in shape for the summer?

Your first step should probably be to check out this photographer's "Squirrelisimo" series.

Max Ellis is known for his bodybuilding photography.

After recently discovering a bunch of squirrels in his backyard, he decided to make them the stars of the show.

Ellis waits for the right moment when the squirrels are interacting with clear thread and small weights.

Then, he captures the shot!

Since he started experimenting with them, he's organized a bunch of different, complex shoots for the squirrels.

His most recent shoots include army tanks and dinosaurs...