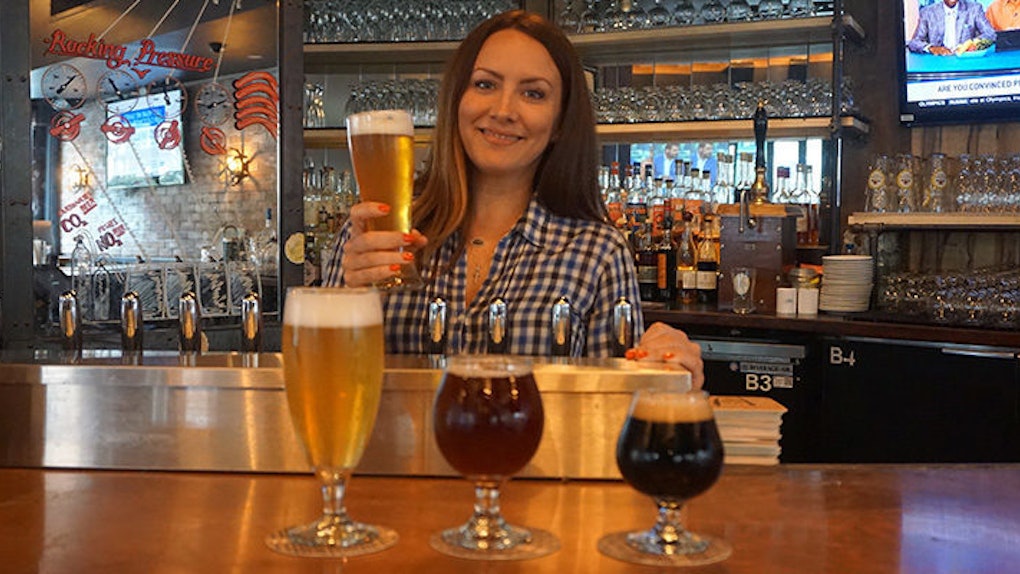 How To Drink Like A Pro, According To NYC's First Female Craft Beer Boss

From light pilsners to heavy stouts, there isn't a craft brew I won't try. But it hasn't always been this way.

Yes, there was a time when I drank Natty Light from a keg like every other college student. But thankfully, those days are long behind me.

And while you may no longer drink Natty Light or Busch Light, you might be surprised to learn that the mass-produced beer you think you upgraded to for weekend consumption is just as cheaply made.

See, a lot of people may hear the term "craft beer" and think it's an elitist, overhyped, overpriced fad. But I spoke to Anne Becerra of NYC's Treadwell Park to set the record straight.

Becerra is the first woman in New York City to earn the distinction of Certified Cicerone, which is basically a recognized beer master of sorts. Think something along the lines of a wine sommelier equivalent.

For the better part of a decade, she's helped cultivate and develop craft beer programs at Manhattan staples like The Blind Tiger, The Pony Bar and The Ginger Man. She's also been heralded as one of the "heroes of the craft beer movement."

When I caught up with Anne at her current residence, Treadwell Park – on the corner of E 62nd street and 1st avenue – I discovered that not all heroes wear capes. But they DO serve the public.

Elite Daily: First off, what does it mean to be a Certified Cicerone?

Anne Becerra: A lot of people are still discovering the program.

It's an all-encompassing test. You have to know not just about beer and beer styles, but the brewing process, ingredients, history and food pairings. And it's just getting bigger and bigger.

ED: How did you get into craft beer, and eventually become the first female Certified Cicerone in NYC?

AB: To me, it's an extension of all the wonderful things we drink on a daily basis. I love wine, I love food, I love spirits and cocktails. I first really got into beers via Belgian beers.

You start tasting these explosions of flavor, and it's like, "Oh my god, I can't believe this is coming from beer and it's the [same] price as the crappiest wine on the market."

You're able to find an unbelievable array of flavors and styles.

It was just a hobby for so long that I initially decided to give myself three months to work in a craft beer bar just for fun, for my own enjoyment and learning experience.

Within the first day or two, that was it. This was going to be my job in some way, shape or form.

ED: What does it mean for you to be a woman dominating what's typically perceived as a man's world?

AB: I think the beer – not specifically craft beer, but the beer industry as a whole – has that reputation for a good reason. It's millions and millions of dollars, ad campaigns, focused so heavily on guys drinking beer.

A lot of them are sexist ads, which is silly. But when you look at real quality and history, women were actually the ones brewing beer. This was part of the household duty. It's not something that's new, but I think if you can separate craft beer from the larger industry as a whole, there's a lot of women.

AB: Staff, quality, diversity, clean lines and good glassware. Everything else helps, but I think without those things, it's really difficult to have a good beer bar.

There has to be options for different people and different palettes. You can go in and have the greatest menu in the world, but if the [staff] is rude or they don't care if you're there, are you going to come back?

ED: How can someone who's not into craft beer navigate a tap menu like the one on offer at Treadwell Park?

AB: If you just know a few flavor profiles, and you go [to a craft beer bar] and say, "Listen, I don't drink a lot of beer, but I really like something citrusy, or something nutty or chocolatey," there's a beer that will be able to fill that.

One of the things we do at Treadwell Park is talk about different cocktails, and if different people drink certain cocktails, there's a great beer recommendation for each.

Don't be afraid to ask questions.

If you know the style you're looking for, it's easier to find a beer no matter where you are.

A Blue Moon is a take on a witbier: a wheat beer brewed with orange peels and coriander. So if you go into a bar and say, "I really love witbiers, what do you have," they're going to give you one, or the closest thing to it.

ED: What are a few of the common misconceptions you've seen and heard about craft beer?

AB: That craft beer is snobby or elitist or expensive for no reason. Look at the words "craft beer." It's handcrafted.

Often times, these are responsible, environmentally friendly, good businesses that are employing people and supporting agriculture.

It's a little more pricey for a reason. The ingredients are better. It's a higher quality being made by hand.

This is part of our history as Americans and as humans. We brew beer, we drink it, we enjoy it.

No matter what happens, we're not going to not have a beer together. It's just something that's universal. As long as that exists, the craft beer industry will exist.

To learn more and get your craft beer experience on, you can visit Anne Becerra at Treadwell Park Monday through Friday from 4 pm to 2 am, or from 11:30 am to 2 am on the weekends.