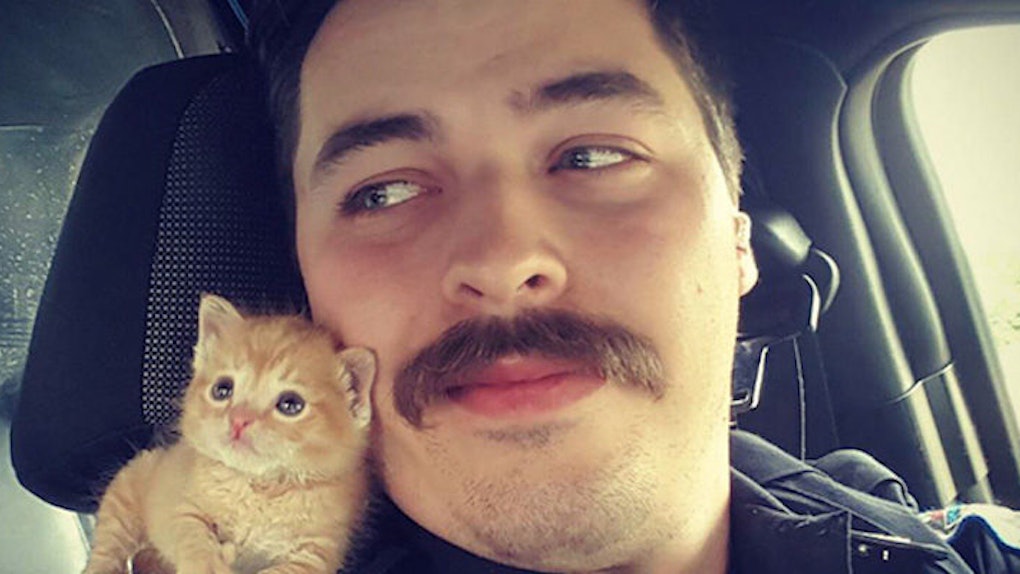 But have you ever seen a cop who fights crime with a kitten by his side?

Cody Garrett is a 28-year-old police officer from South Carolina who's been gaining a lot of attention on the Internet lately thanks to his new patrol parter, a tiny tabby named Squirt.

Recently, Garrett was working a graveyard shift when one of his fellow officers discovered an abandoned kitten whimpering under a dumpster while out on a call.

The officer ended up rescuing the poor lil' fella and taking her back to the station, where no one really knew what to do with the itty bitty feline.

Officer Garrett may look like a tough guy on the surface, but don't let his cop 'stache fool you.

This guy clearly has a soft spot for cute AF baby animals (but then again, who doesn't?), so he volunteered to adopt the kitten and named her Squirt.

It didn't take long for Squirt to become Garrett's furry new BFF, and since that fateful night, this dynamic duo has been capturing all sorts of precious Instagram pics as they protect the citizens of South Carolina.

When Squirt isn't going on adorable ride alongs, you can normally find this fuzz ball patrolling the house in search of cat burglars and making sure all of her fellow felines are abiding to the litter box laws, of course.

Check out the photos below to see this cop and his precious partner.

Garrett may look like your average 28-year-old police officer, but don't let his macho mustache fool you.

This dude clearly has a weakness for baby animals, and after one of his fellow officers discovered an abandoned kitten under a dumpster...

...Garrett decided to adopt the precious little fur ball and name her Squirt.

Squirt was immediately welcomed into the family by Garrett's other cats.

...or embrace his affinity for impressive facial hair. Yep, it's not hard to see these adorable patrol partners make the purrfect crime-fighting pair.

Citations: This Cop Rescued A Kitten Left In The Rain And Now They're A Crime-Fighting Duo (BuzzFeed)