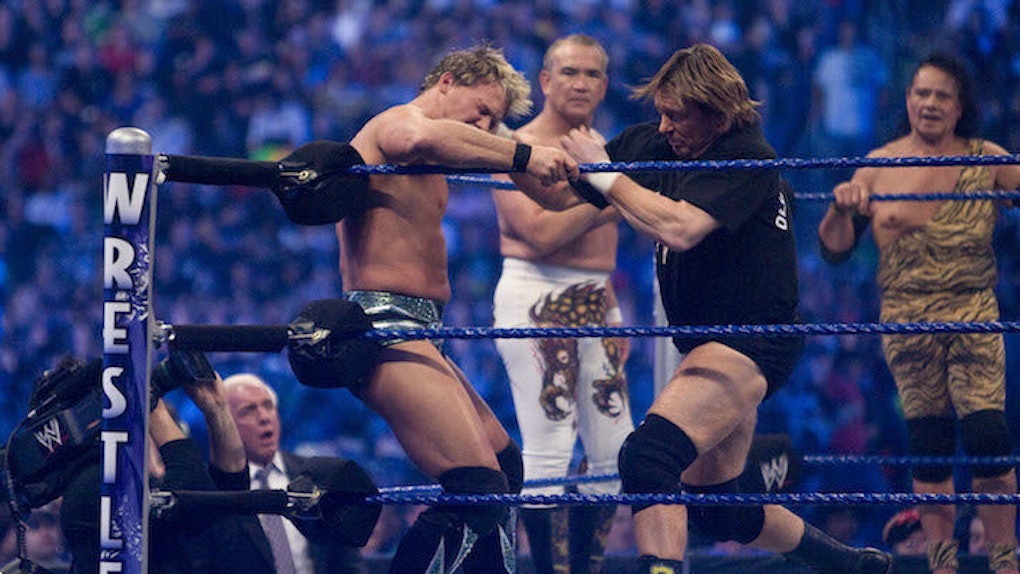 What Professional Wrestling Taught Me About Finding Love

It's no secret that yours truly is a quiet seeker of love -- money as well, can't forget about money.

But don't get me wrong; while I love me some paper, love is what I'm really seeking.

Like many in the search, there were issues that frustrated me. I sought answers to burning questions -- questions such as "What do women look for in a guy?" and "What impresses women?" These would rack my brain for some time, but the one that really gave me fits was the age old "Why do women like bad boys?"

You can probably tell I am not a "bad boy." If I was, I would not ask that question, let alone write this article.

I'm a nice guy, what can I say? That's my lot in life, but instead of being resigned to my fate, I would ask why?! I needed answers. And finally, I got some. Only little did I know those answers I sought would come to me from a familiar-yet-unexpected place: professional wrestling.

I have been a pro wrestling fan since I was 5 years old. I never thought what went on in the squared circle would prepare me for love.

When I recently asked myself for the billionth time, "Why do women love bad boys?" I thought of 1997. It was a quintessential year for me and wrestling; we were both coming of age and the public's taste changed. "Cute and wholesome" was out, and "crude and rude" was in. "The Beavis and Butthead" generation had begun, and we were all in for the ride.

Let me warn you before we get into the meat and potatoes of this article: I am going to use a lot of pro-wrestling jargon, some of which might not be understandable to non-wrestling folk, however, I assure you, there's a point.

I would dream of being one of those kids sitting at ringside who were lucky enough to get a pair of the Hitman's glasses, which he gave away before every match. He even wore pink to the ring and got away with it! "Real men wear pink" started with the Hitman.

Soon the mid-'90s would turn to the late '90s, and a not-so-new ringmaster was repackaged as Stone Cold Steve Austin. Austin took the wrestling world by storm. Stone Cold was the exciting bad boy I wanted to be. You never knew what he was going to do, and that thrilled me to no end. My loyalties would soon be tested when, lo and behold, the Hitman was pitted against Austin at Wrestlemania 13, the biggest event of the year.

When that decorative "Austin 3:16" entranceway glass broke, so did my innocence… then, I did the unthinkable. I actually started rooting for Stone Cold over the Hitman. Like Selena Gomez, I was sick of that same old love! I had chosen the bad boy over the nice guy. I didn't even leave Bret for Shawn Michaels during the Iron Man Match at Wrestlemania 12, only a year earlier, so this was big.

I had left the perfectly nice guy for the proverbial bad boy. I had become what I would grow to mock. Now, five years later, my fascination with Stone Cold faded. I have come back to my original point of view, and Bret, in retrospect, is my favorite wrestler of all time.

Now before I conclude, I assure you I had nothing but non-sexual feelings toward these men. I was just waxing poetic for effect… I was just a boy smitten by the greatest medium of our time, pro wrestling. Just wanted to put that out there.

All those years, when my feelings for women would go unreciprocated, I think it was because I was a Bret Hart, and they wanted a Stone Cold Steve Austin. Whenever girls said, "Reggie you're a nice guy, but…we..." they meant they didn't want a pink-wearing, black sunglasses-giving kind of guy; they wanted a glass-shattering, beer-drinking, hell-raising bad boy, because, you know, they're only young once. Our youth is too short not to have a little excitement, and rightfully so. People like what they like.

So was my recourse to become a bad boy? Like pro wrestling, do I appease my intended audience? No. Wrestling also taught me you have to be true to yourself. If you have a good persona, if you have good character, eventually, you find your niche, and someone will find you special.

Bret Hart decided to make a change; he became that bad boy, and it didn't go over well. Instead of being cool and edgy like Stone Cold, the Hitman came off as bitter and frustrated. Almost everyone agreed he was at his best when he was himself, and the same goes for me. I am not a bad boy, I'm a good man, and one day, I will find my audience.

That's what wrestling has taught me about love. On a more serious note, my favorite wrestler Bret "the Hitman" Hart has revealed to the world that he is battling prostate cancer.

I wish the Hitman the best and know the "excellence of execution" will make cancer tap out to the sharpshooter. Fight, Bret! Fight!