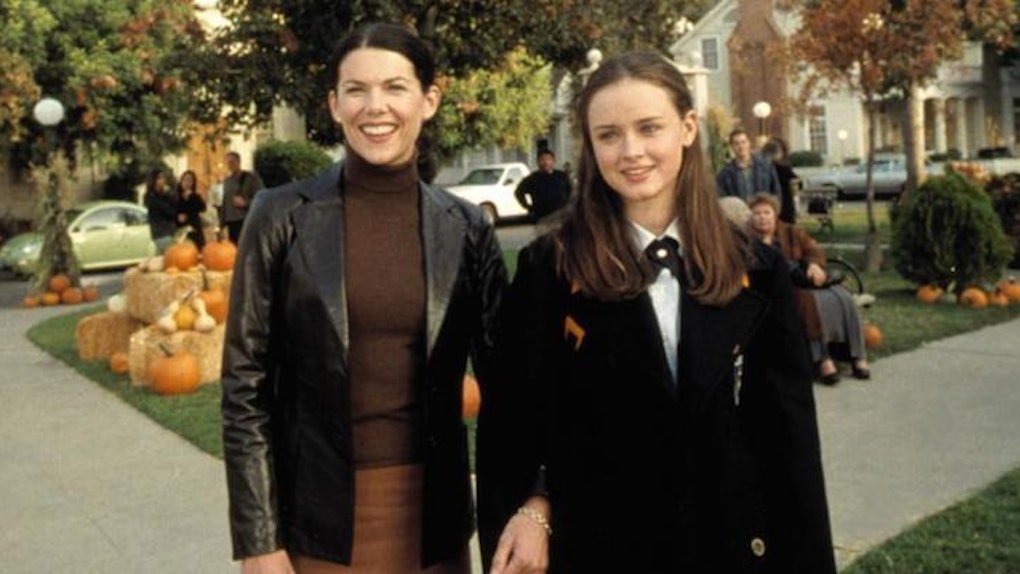 Here's What Happened When I Visited The Real 'Gilmore Girls' Town

Autumn in New York may be worth writing a song about, but as any "Gilmore Girls" fan knows, there's nothing like fall in New England.

So last weekend, my aunt, cousin and I decided to take a trip to Vermont.

We checked tons of basic fall activities off our list in less than 48 hours -- we took in the foliage, posed for pictures in a pumpkin patch, drank Pumpkin Spice Lattes from a drive-thru Starbucks, bought authentic maple syrup and then drove down to Connecticut to pick apples.

Just as we were about to head back to New York, my cousin Kathleen said,

Hey, isn't the town Stars Hollow is based on in Connecticut somewhere?

I immediately recalled reading about a place called Washington Depot.

"Gilmore Girls" creator Amy Sherman-Palladino had been on vacation in Connecticut and was staying at a charming inn (which she based the Independence Inn on) in an adorable town where everyone seemed to know each other.

And she suddenly thought to herself, "Hey! This would be a great place to set a TV show."

I checked my Google maps and it was only an hour from the orchard we had just picked 20 pounds of apples at in.

We had to eat lunch somewhere, so we went. Here's what happened.

There was no gazebo.

I know there's this new wave of "Gilmore Girls" fans who discovered the show when it came to Netflix last fall, but all three of us have been huge fans since the show hit the WB in 2000.

I was a teenager at the time, and all of Rory's heartbreaks, bad grades (I, too, got upset when I didn't get A's) and friend drama really resonated with me.

So when we rolled into town and quickly realized there was no gazebo to speak of, meaning there was no central location for all those festivals, we were pretty devastated.

What was Stars Hollow without the town square? Just some friendly people and Luke's Diner?!

The people did not like being associated with "Gilmore Girls."

Perhaps our arrival in Washington Depot was poorly timed.

The news had just dropped four ninety-minute "Gilmore Girls" episodes are coming to Netflix, and the new wave of "Gilmore Girls" fans I mentioned above have probably made the tiny town an annoyingly popular destination for its residents.

The first place we stopped was a charming bookstore called The Hickory Stick Bookshop. It was perfect.

There were comfy chairs everywhere, and I could just imagine Rory getting lost in the shelves and accidentally bumping into Jess, who would, of course, pretend he hadn't been following her around town.

After doing some browsing, I went up to the register and said,

So this is the town Stars Hollow is based on, right? Where should we eat? Is there a place like Luke's Diner?

The woman was nice enough. She told us to go up the hill to a place called The Hidden Valley Diner. What a great name!

So that's exactly what we did. The only problem was we couldn't actually find the diner. There were a lot of beautiful houses and farms, but no restaurant.

So after half an hour of driving around aimlessly, we pulled into the parking lot of a store called Washington Food Market, which is what we assumed Doose's was based on.

We even saw a Dean-like character walk in.

This time, we sent Kathleen to ask the questions. She went up to the register and said,

We're here because we heard this is the town Star's Hollow is based on. Where should we eat?

The woman behind the counter rolled her eyes. The guy behind her in line made an annoyed noise, it was very "I've heard this line before."

There are a lot of places to eat.

And the guy behind her snickered. Oof.

We all left Washington Food Company, defeated and humiliated. Was it so wrong that we were "Gilmore Girls" fans?

I'm getting the feeling these people do not like being associated with "Gilmore Girls."

It was actually one of the most gorgeous places I've ever seen.

I know I've said some negative things about Washington Depot so far.

And while it's true the people weren't that nice and the lack of gazebo was disheartening, I had a really great time there.

We eventually drove up a hill and found The Mayflower Grace, which is where Sherman-Palladino stayed. Plus, the streams running through town and fall colors were beautiful.

We also found The Hidden Valley Diner (AKA Luke's) eventually, and it was great.

There was no grumpy Luke-like guy who clearly owned the place and lived upstairs, but we had some delicious homemade English muffins, clam chowder and BLTs.

Also, there was absolutely no cell phone service in Washington Depot, CT. And somehow, that makes a lot of sense.