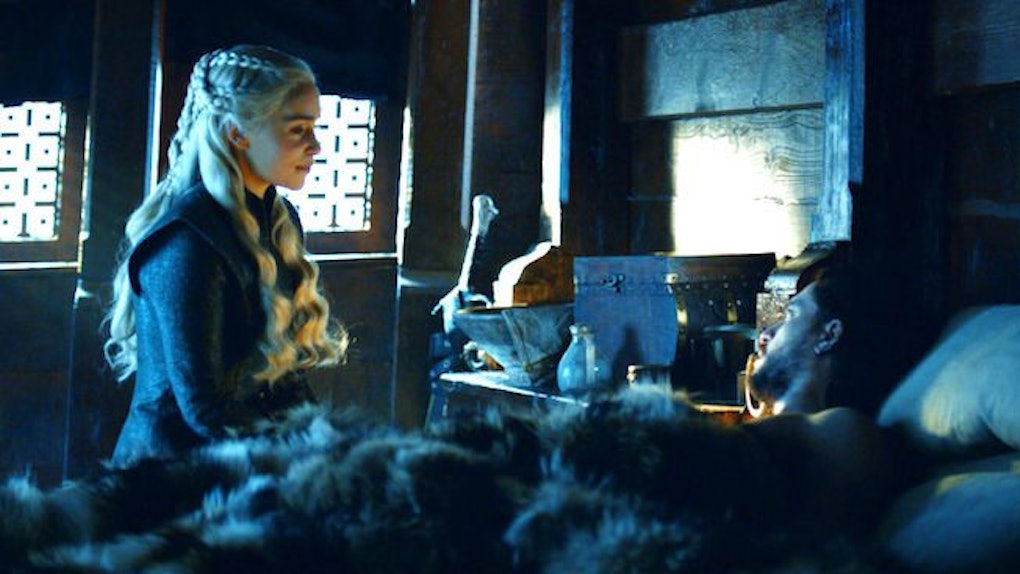 It's just not a Game of Thrones finale without sex and murder. We got our fair share of shocking deaths in Sunday night's Season 7 finale, and the episode didn't skimp on the steamy sex scenes either, thanks to one hot-and-cold pairing that finally got it on! Now, just from seeing that episode title, you probably already assumed this would be the episode when Jon Snow and Daenerys Targaryen finally hook up. The Bastard of the North and Mother of Dragons have been shipped by GoT fans for years now, and the show finally gave us what we all wanted with a ridiculously hot sex scene between the two fan favorites. Of course, Twitter erupted and the tweets about Jon and Dany's sex scene haven't stopped providing us with hilarious reactions to long-anticipated hook-up.

Spoiler alert: This post will discuss details in the Game of Thrones Season 7 finale "The Dragon and the Wolf."

After successfully (at least, to their knowledge) brokering a deal with Cersei Lannister to march north together against the White Walkers, Jon and Dany celebrate with a little bedroom magic. But in a kind of sick twist, at the same time as the sex scene unfolds, Bran sees the truth about Jon Snow's parentage... which makes Dany Jon's aunt. Twitter was quick to react with a ton of jokes about the unbeknownst incestuous hookup.

But despite being such an intensely shipped romance, there is a ripple of grossness involved in the Jon Snow and Daenerys hook-up, given that she is his aunt after all. Yeah... not exactly an ideal romantic partner. We did discover that Jon's real parents were Lyanna Stark and Dany's older brother Rhaegar Targaryen in the new episode, so that will probably cause a rift in their relationship going into Season 8. Or, maybe they'll go the way of Jaime and Cersei and just ignore the whole family detail? Only time will tell...