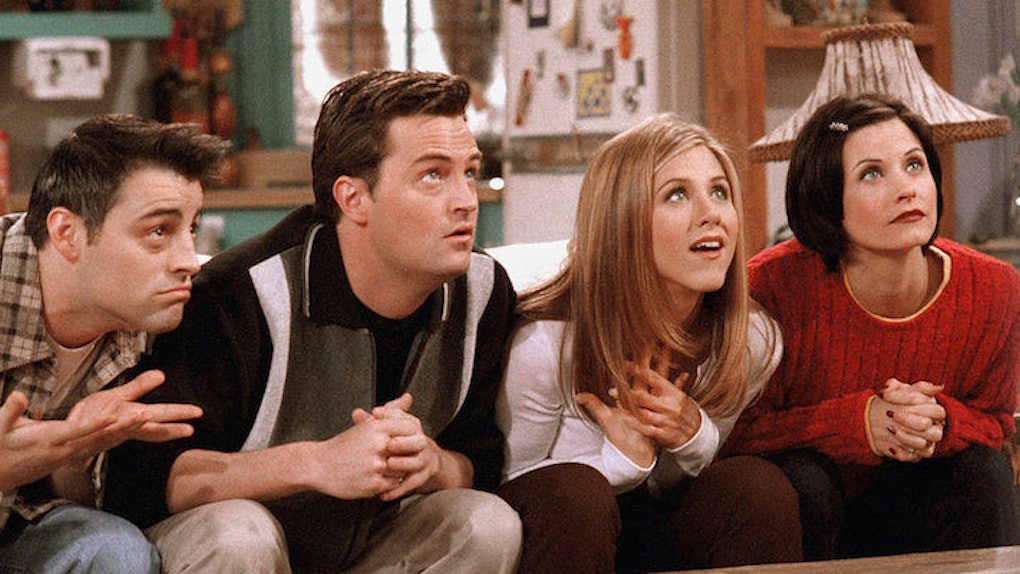 10 Revelations You Have From Watching All 10 Seasons Of 'Friends'

This is probably not something to be proud of, but I’m part of a generation that binge-watches Netflix when the going gets tough.

So in a frenzy of pre-graduation anxiety, I managed to watch every single episode of "Friends."

It started after I had the song “Smelly Cat” stuck in my head for over a week.

Upon realizing that my boyfriend didn’t know the reference, I pulled him into this little semester-long journey of watching six 20-somethings drink coffee in their comfortable, East Village apartments.

We watched, we fell in love, we clapped along to the theme song and we hit the condescending “continue watching?” button all too frequently.

Along the way, we also happened to pick up on some big messages about the formation of the modern sitcom and the re-molding of our society.

Here are some of the most important things I learned from "Friends," in no particular order:

1. Basically every other sitcom is on the air because of "Friends."

The show’s impact travels beyond its original airdates, as it remains popular even 10 years into its syndication.

"Friends" became an important show to younger generations in the late 1990s and early 2000s, meaning today's 20-somethings now are still absorbed in those episodes.

It created a television-watching culture for sitcoms, which made way for shows like "How I Met Your Mother" and "The Office" to gain popularity.

It also changed the content of the average sitcom. We’re in an age where college-aged people are dominating forces, both as audience members and as subject matters. But, when "Friends" was released, this wasn’t the case.

Many insider articles about the show say that its creators, Marta Kauffman and David Crane, were told nobody would watch a show about young adults, and they should add an older character into the mix.

The entire television world is better off because they didn’t heed that advice.

Though "Friends" was set in New York, almost all of the scenes take place in their coffee shop, Central Perk, or the apartments.

In fact, in one particularly notable episode, the entire plot happens in one location.

This “bottle episode” format is rarely accomplished on major shows, and proves we don’t always need an intricate depth of field. Good shows are much more than good locations.

3. Character building is what makes television so effective.

There’s a reason why Netflix shows are so popular. They’re the cross between a film (because you can watch episodes consecutively instead of spreading them out across weeks) and a television show (because they still have 60- or 30-minute episodes with recurring characters, and are split into seasons.)

We want to follow the same people, but we also don’t always have the patience to wait six days for the resolutions of their cliffhangers.

Our society’s desire to keep up with the same characters is why "Friends" kept its ratings up.

Kauffman and Crane found six tropes and made them into vivid, dimensional characters who people cared enough about to watch every week for 10 years.

If (God forbid) you skip an episode of "Friends," you’re not missing much of the story line. Other than big events like weddings or the introductions of new characters, nothing changes between episodes.

They go through plot lines and then find themselves back at square one before the credits hit.

Watching the show consecutively, this was particularly noticeable. At the end of one episode, a character would have a small injury or a weird haircut that didn’t come back in the next episode.

Though this structure is strange for binge-watching sessions, it’s perfect for syndication.

Undoubtedly, a major reason why "Friends" is still getting airtime is because it’s so easy to pick up the show at any point and still be able to follow.

Rachel, Monica and Phoebe were able to capture the fashion senses of average 90s women and revealed a lot about that era — from the lack of bras to the enviably flowy dresses.

Other trends are visible through the show as well, such as popular phrases, foods and songs paint a very quirky picture of the century.

6. Ross (and the mentality he represented) kind of sucked.

According to the all-knowing Wikipedia, the term “friend-zoned” actually came from Ross’ situation with Rachel on the show.

This is no surprise, considering his frequent misogynistic, slut-shaming commentary (see the episode where he refuses to hire a male nanny, etc.)

Before I watched the show consecutively, I saw Ross as a harmless, kind of annoying addition to the group. Seeing it all at once, though, I struggled to pinpoint his redeeming qualities.

He was rude to Rachel, rude to women and self-centered. What’s upsetting about this realization is that Ross often embodied the average man; he seemed to be the token down-to-earth character, meaning that a few too many 90s men related to his backward way of thinking.

Ross’ archetype is much less visible in more recent sitcoms and in the world in general, at least from my point of view.

Though "Friends" was a forward-thinking show, it was easy to catch some off-base comments, like ones about Chandler’s father.

The jokes about homosexuality and gender roles are by no means meant to be offensive, but it’s clear that the 90s held a much different view of gender and sexuality.

8. "Friends" is part of the reason we all idealize New York.

Taylor Swift’s “Welcome to New York” has become the anthem for young people trying to start careers in the big city, but Swift’s idea is certainly not new.

Every Millennial wants to feel like New York has been waiting for us, because we want to move into the world we saw in sitcoms growing up.

"Friends" paints a picture of New York that justifies spending one’s life savings on a one-bedroom apartment and sending out job applications while making $7 an hour serving coffee.

Apparently the creators of the show actually helped The Rembrandts write the theme song, which explains why it fits the show so well.

The "Friends" theme song almost has the effect of a jingle in an advertisement; it gets stuck in your head, so it makes you want to watch the show all over again.

10. There will probably never be another show as great as "Friends."

One thing that I’ve realized from my rather short career in the media industry so far is that almost every good thing is a happy accident.

The show and the writing was gold, but above the talent was this intangible sense of perfection that will be difficult to duplicate.