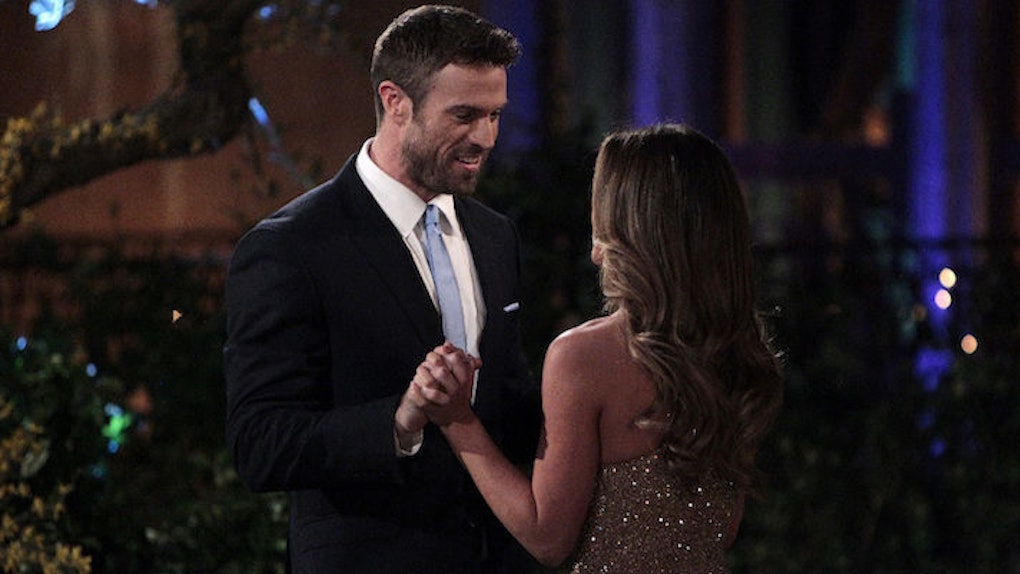 Why Did JoJo From 'The Bachelorette' Try To Sympathize With Chad's Violent Behavior?

Whenever a bachelor said something he didn't like, Chad's solution was not to have a conversation about it like an adult, but to puff out his chest and say, "YOU WANNA GO OUTSIDE, BRO?" like a 19-year-old frat boy in a backwards hat. He took every opportunity he could to threaten the guys in the house with violence and abuse. He even threatened to find Jordan (one of my favorites!) after the show ended and beat his ass. Yikes.

I won't lie, at first (pre-threats of violence), I was in support of Chad. I even tweeted about it. I thought his whole "brutal honesty" thing at the SportsCenter challenge was cool, and could have potentially charmed JoJo. But Chad quickly spiraled from someone I supported to someone I truly feared.

At the end of last night's episode, on Alex and Chad's two-on-one date, Alex told JoJo that Chad was threatening violence in the house. JoJo seemed really distraught by the whole thing. When she later confronted Chad about his potentially abusive behavior on her own, she still seemed distraught, but then she seemed ... sympathetic.

While crying into the camera, JoJo said that since Chad's mother died six months ago, she believed Chad was having a hard time handling that and was resorting to violence as a way to cope with his emotions. She actually tried to justify his behavior.

Obviously, JoJo wasn't in the house whenever Chad acted like an asshole, so she wasn't 100 percent sure what was going down. But Alex wasn't the first guy to express concerns about Chad. Multiple guys throughout the past few weeks have told JoJo that Chad is a dangerous, scary guy. And yet, JoJo chose to sympathize with Chad anyway.

The fact that JoJo responded to multiple guys expressing fear for their safety with an attempt to sympathize with Chad's behavior disturbed me.

JoJo very clearly liked Chad, so much so that it's not unreasonable to say he could have become her fiancé at the end of the season. But the fact of the matter is, he's a violent guy. And he could have one day threatened her safety if they got married. If that were to happen, would she try to sympathize with him again?

She might have. A 2011 study reported on Reuters shows that victims of domestic violence minimize their perpetrators' abuse by appealing to the perpetrator's loneliness or depression. So instead of seeing the violence as violence, victims actually sympathize with their abusers, just like JoJo did.

To come to these conclusions, researchers listened to conversations between 17 male abusers and their female victims. In the conversations, abusers persuaded the victims that they didn't deserve to be charged for the crimes. They told the victims they were just depressed and missed the victims and their children. One abuser even threatened to kill himself until the victim said she'd help him get out of jail. These "sophisticated emotional appeals," as the study calls them, were used to gain the victim's sympathy.

I could absolutely see Chad doing any of the aforementioned things. Throughout the episodes, he continued to assert to the camera that he's "not a violent guy," regardless of the fact that his actions SO CLEARLY proved otherwise. So either he was manipulating the audience into believing he's someone he's not, or he's delusional about his own self-perception.

In addition to manipulating the audience, he was manipulating JoJo. All the bachelors couldn't believe how different he was in front of her. JoJo kept acknowledging that Chad had this "soft, emotional" side, while the rest of the house was just seeing his violent side, and couldn't understand how JoJo saw anything else.

Thankfully, JoJo let Chad go at the end of last night's episode. But I shudder to think what could have happened to JoJo if Alex and the other bachelors kept Chad's violence a secret.