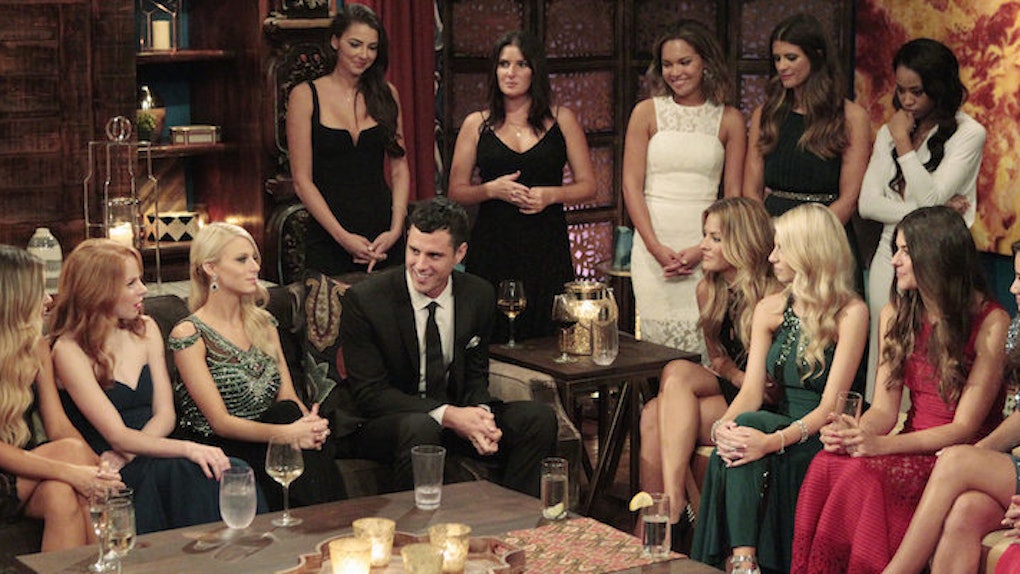 Last night, on "The Bachelor: Women Tell All," America got its first post-show/pre-finale look at the trail of broken women Bachelor Ben Higgins has left in his wake. Seriously, look at these faces. These women have dead eyes. This show has taken something from them.

Full disclosure: This is the first season I've watched "The Bachelor." So while most of America has already experienced 19 seasons of rose ceremonies, fantasy suites, copious wines and ugly cries, I'm coming at this with a fresh sense of incredulity at the insanity of the whole thing.

This is my first time seeing seemingly intelligent and rational women refer to a man they've just met as "my husband," the first time I've seen women profess to fall in love with a guy after spending something like a total of 36 hours with him over 6 weeks, and the first time I've seen a group of some of the most beautiful women I've ever seen in my life reduced to catfighting over what is essentially just a dude, albeit a good-looking one.

I know I'm not the first to have a theory about the psychology behind it all.

I've seen the show's "process" compared to the notorious Stanford Prison Experiment, in that the women are isolated from their regular lives, including friends, family, phones and other basic media. All this lead to them losing touch with their regularly identities and adapting to the "rules" of the new system they find themselves in.

I also immediately recognized some of the basic (if ugly) psychology of dating coming into play. Take a bunch of beautiful women -- women who are used to being chased after by men in their everyday lives -- and put them in a situation where they are forced to compete for a guy's affection. They're going to wonder "What's wrong with me?", they're going to start craving validation from this seemingly "in-demand" guy, and they're going to lose their minds a little.

It's Dating 101, whether we like it or not, the same concept dating books like "The Rules" are based on. The less attention you pay someone, the more they want you.

It's also, I realized, the whole basis of the pickup artist or "seduction" community, which you may remember from Neil Strauss's "The Game" and the VH-1 reality show starring "Mystery," he of the large fuzzy hat and creator of the "Mystery Method" for getting the "hot smart blonde girl you've always wanted."

"....[Indicate] to her that you're not interested in her over anyone else in the group. This is a new thing for her. She'll feel the bitter sting of being just like everyone else. Her looks no longer give her all the power – because you're not responding to her looks. Because you're demonstrating social value to the group at the same time she's wondering, “Why isn't this guy attracted to me? Why isn't this guy paying attention to me? Who is this guy? How am I going to win this guy's attention?” Everyone wants to be liked. Everyone wants approval. No one wants to be ignored. The same holds true for beautiful women – even more so. Their whole reality is based on having power and having acceptance and adoration through their good looks. Take that away and their whole reality crumbles and they'll do anything to get it back."

PUA techniques, while inherently sleazy and manipulative, as well as pretty universally reviled, have been shown in some studies to be effective. And the more I looked into the standard tricks of the trade, the more I realized how much they resembled the "Bachelor" process.

Basically, the idea of pre-selection is that a man should make himself appear as desirable as possible in order to get the woman to chase him vs. the other way around. Some ways PUAs suggest doing this include things like rolling into the club with a group of hot women, posting pictures of yourself with other attractive women, or even faking a phone call with a woman in the middle of your conversation.

According to Seduction Science, "What you will find is once one girls finds you attractive, other girls will follow suit."

This is also part of "demonstrating high value," which is often done partly by showing that other women want you. This is something that's actually pretty difficult to do in real life, but which is literally part of the framework of "The Bachelor."

And of course, the flip side of "demonstrating high value" is that you are showing the woman that she has lower value, and thus she should want to be with you. Also adding to Ben's perceived "high value" are the hyper-romantic dates, fancy destinations and expensive vacations, which create an aura of wealth and power, even though he isn't really able to provide those things outside the world of the show.

From PUAlingo.com, the "takeaway" is defined as such:

"The idea of the 'takeaway' is to literally take away the PUA's strong presence from the woman, to make her feel a sense of detachment from you. While in the PUA's presence, the sun is shining down on her; when the PUA leaves, so does the sun. The positive emotions associated with his presence are also taken away, and she is left in the rain... A takeaway can include going to talk to another girl, or leaving on purpose to go to the bathroom or get a drink."

GOING TO TALK TO ANOTHER GIRL. Again, this is exactly what happens over and over again on "The Bachelor," as conversations are frequently interrupted by other girls "breaking in," and women are forced to share attention with other women on group dates.

Not to mention that Ben's physical presence and attention is a limited resource, as he seems to be frequently whisked away from the girls, who have to compete for his attention when he is present.

The concept of push-pull revisits the idea that chasing a girl doesn't work. Instead, the PUA is supposed to demonstrate high value so that the girl chases him. However, he can't appear to be entirely disinterested or he'll lose momentum with his chosen target, so he uses the "push-pull" technique.

BestPUAtraining describes it as such:

OK, is anyone else starting to get freaked out?

The Open Loops technique is used to keep a woman chasing a feeling of "completion" to unresolved emotional or sexual drama. Basically, the entire "Bachelor" show up until the finale is an open loop. The women are kept hanging in a state of uncertainty and melodrama that they naturally want to force into a comfortable conclusion. In the "Bachelor" universe, that closure is a proposal or at least being picked as the "winner" at the end of the show.

I'm not saying Ben himself is a pickup artist, or even that any of this is a conscious decision, but it does pull back the curtain on some of the psychology at work in a show that somehow gets a bunch of beautiful, capable women to fall in love with a stranger in a few weeks time. It's like Jo-Jo's brother pointed out at the home-towns: These girls are possibly a little brainwashed by the whole process.

I'm also not saying I haven't enjoyed the hell out of watching it happen. The show has been on for 20 seasons for a reason -- it's entertaining as hell. There are mini horses and pigs mowing down bachelorettes left and right and Olivia's misplaced insecurity about her "cankles."

But one thing that became clear after last night's show is that this show actually hurts people. It gets in their heads and hearts and actually messes them up, at least for a little while.

And considering that Ben "Rulebreaker" Higgins has already told both of the final contestants that he loves them, it's a given that somebody's going to end up totally devastated after next week's finale.

Let's just hope that when the smoke clears from all the manipulation and mind games, the "winner" still wants her prize.