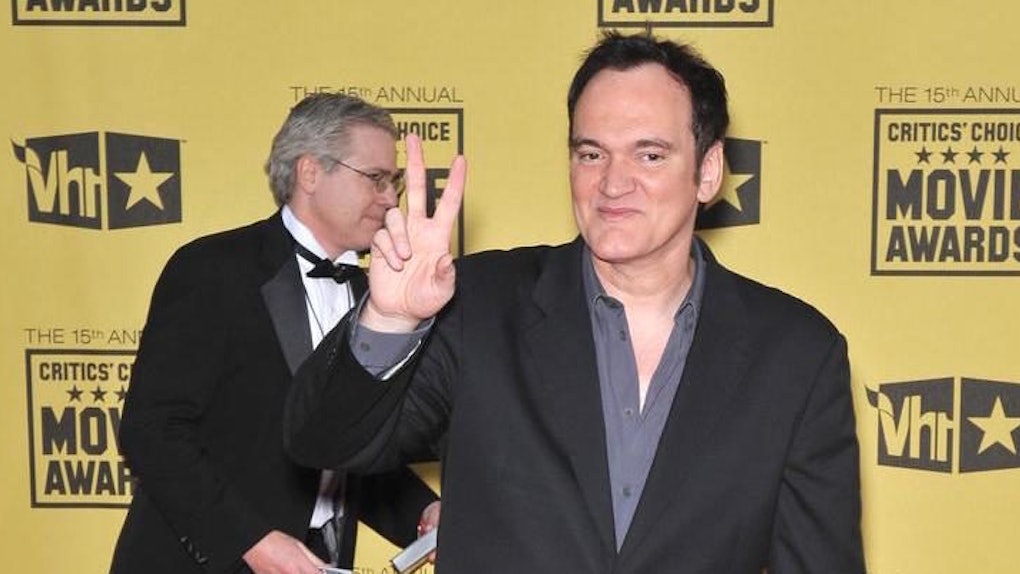 Why You Can't Relate Tarantino's Movies To The Police Brutality Problem

I’m a Tarantino fan. His movies are notably some of the most graphically violent and cruel films I have ever seen. They come bursting at the seams with disturbing and disgusting images.

His stories have graced the big screen for years, and we flip our sh*t for anything Quentin’s crazy genius mind creates.

We embrace his weirdness, quirks and his movies in all of their violent Tarantino slapstick glory.

That is, until he decided to join thousands of demonstrators for Rise Up October this past Saturday in Washington Square Park to participate in the march against police brutality.

Now all of a sudden, we’re worked up by the fact that Quentin Tarantino participated in it, and said something his publicist probably didn’t approve of.

I’m a human being with a conscience. If you believe there’s murder going on, then you need to rise up and stand up against it. I’m here to say I’m on the side of the murdered.

Well then Quentin, the entire NYPD wants to know why do you make so many movies bursting at the seams with murder, death, violence and crude, dark humor.

Oh wait, guys, I totally know the answer to this one.

Because Quentin Tarantino is an entertainer.

He’s a writer, producer, a director and an actor. He is a businessman and an artist. He’s undeniably an incredibly talented filmmaker, with a very distinct voice, and we respect his work as an artist.

Because of his talent and artistry, though, we recognize him as one of the greatly notable filmmakers out there. Surely whatever he says holds massive truth and fact.

We should all agree with everything that Quentin Tarantino says, right?

Why do we hold so much weight over the celebrity?

We take anything they say to heart, but we forget that at the end of the day, they started as normal people.

They were once dreamers, like us. They created their lives for themselves, they put the hard work into their work and we take their talents for granted.

We glorify them as celebrity figures, but we forget they are ordinary human beings at heart, who have been exposed to the extraordinary circumstance that is being famous.

Tarantino was using his power to make a statement that he believes in.

Of course, he assumed his word would be heard nationwide, but these Hollywood A-Listers who jump into these events receive all the scrutiny.

Can’t we instead focus on the purpose for the march?

Media is now buzzing with the fact that Tarantino is a hypocrite and a phony because of what he said, and now the entire NYPD is offended.

But we really shouldn’t care about his opinion, as horrible as that sounds.

We should instead focus our energy on what the rally was actually about. We should be focusing on the ever-growing nationwide issue of police brutality and racism in our country.

He was standing up for what he believes in, but alas, he is Quentin Tarantino, so we have to hold everything he says to heart. We have to immediately peg him for a hypocrite because his movies seemingly represent the complete opposite of what he was standing for.

He has given violence humor. He glamorizes it and he glorifies it.

They present all of the painstakingly relevant issues in a way that sheds a light on the ,and takes some of the pressure off.

Encourage a ban of "The Hateful Eight" in response to a growing issue, but let’s allow Amy Schumer to continue #AimingForChange because that doesn’t spark debate amongst the proud Republicans in the nation.

Maybe the pro-gun supporters shouldn’t support Amy Schumer, or watch whatever she releases next. Maybe we should stand for a nationwide boycott of Amy Schumer?

The bottom line is, we won’t all agree with Quentin, and we don’t even have to all like his movies.

But at the end of the day, the man is a gifted filmmaker. Violently exploitive or not, his films are debatably some of the most groundbreaking ever made.

So do we really need to boycott his stuff?

In honor of Quentin, below you’ll find clips from one of Tarantino’s classics, "Pulp Fiction," of course.

Do not watch the below clips if you stand with the entire NYPD and support their attempt to promote a ban on Tarantino’s stuff.

I Shot Marvin in the Face