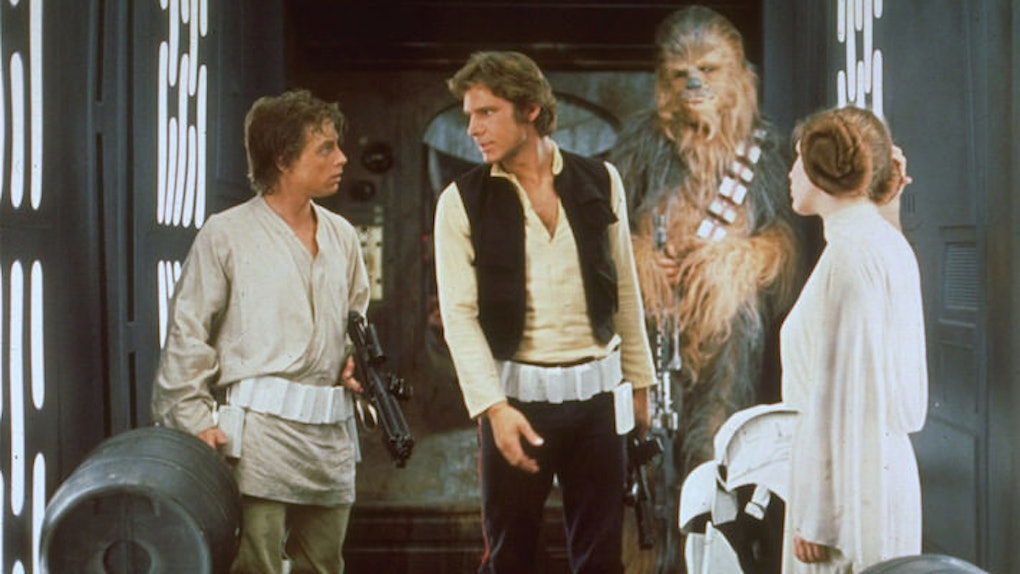 I've never seen the original trilogy or any of the prequels.

And this wasn’t such a big deal until I went to film school. It was there I learned to be quiet about my dirty little secret.

"Star Wars" was the reason a lot of my classmates applied to film school in the first place.

I couldn’t walk into a lecture without the mention of George Lucas, and John Williams’ score became as familiar to me as a lullaby.

But still, I went all four years of college without actually seeing the movies.

At first, I’ll admit it was because I just didn’t care.

I was never a fan of science fiction, and I preferred television over film.

Plus, the visual effects just didn’t do it for me.

I never felt particularly motivated to see what all the fuss was about.

I already knew who Darth Vader was, and I knew the person Princess Leia ended up with.

Was her own brother honestly an option?

But then, film school happened, and I developed a profound respect for the movies.

It wasn’t just the love I had felt since childhood; it was a sense of reverence.

I got chills when the lights went down in a theater.

I learned what a 35 mm was and how much of a difference it made.

I came to appreciate the intricacies of theme and depth of character.

And I learned how movies changed the world.

When "Star Wars" came out, it fundamentally altered the state of Hollywood.

Without "Star Wars," we wouldn’t have special effects as we know them today.

And modern merchandising? It wouldn’t exist.

Think of all the "Star Wars" spoofs and references you’ve seen throughout the years.

It combined genres in such a way that appealed to everyone.

For the first time, adults, children, teens and seniors from all walks of life were going to the movies together.

The world bonded over a singular event.

A professor of mine once said you can judge the quality of a film by how well it stands the test of time.

"Star Wars" is a cultural phenomenon that has remained in our lexicon for 40 years.

It has inspired millions of people, from filmmakers to musicians to politicians.

My 6-year-old cousin is just as excited for "The Force Awakens" as his dad, who saw "A New Hope" in theaters.

So as you can imagine, I finally got the idea.

Even though I hadn’t seen it, I grew to appreciate "Star Wars."

But here’s the thing: I also became a total film snob.

My moviegoing experiences had to be perfect. I wasn’t just gonna Netflix this one.

There had to be total darkness, and for the love of God, people had to shut the hell up.

This was the way movies were supposed to be watched, and this was what I wanted for "Star Wars."

I came to recognize that a movie like "Star Wars" deserves more.

It deserves my undivided attention and consideration.

So, being the "Star Wars" virgin that I am, I’m waiting.

I’m waiting for the perfect time to experience something that has changed lives.

Luckily, I won’t have to wait much longer.

With "The Force Awakens" coming out, there are plenty of big, movie theater screenings to check out the original trilogy.

And I guess there will also be screenings for the prequels, too.

After so many years, I’ll finally understand what the deal is with Stormtroopers, and why they seem to have such bad aim.